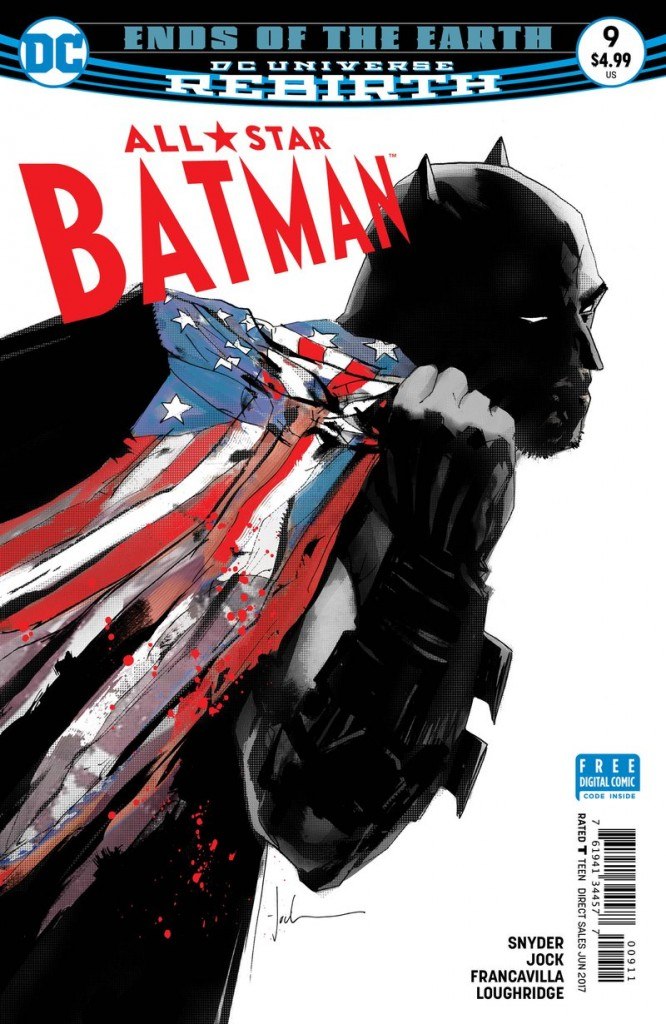 I’ve said it in just about every way feasible, but I will continue to say it: All Star Batman is incredible. Up to this point, Scott Snyder’s work has been experimental with how the legend of Batman is viewed by the people of Gotham and, ultimately, us as an audience. But in All Star, Scott Snyder experiments with how we read Batman, playing with various methods are narration, giving each “episode” a very distinctive look and feel alongside with a Murderer’s Row of A-list artists at his disposal.

It’s entirely likely that Issue #9 my favorite and, very possibly, the best issue so far of what has been a top-shelf series. This marks the conclusion of the world spanning, “Ends of the Earth” story arc where Batman has been chasing down a Doomsday solution that has put him in the crosshairs of some of his most infamous foes. The formula hasn’t changed since the end of the road has delivered him to one of his absolute most formidable villains. The question of whether or not humanity is slouching towards its own destruction has been more relevant than ever and the mystery baddie is probably the best suited to explore this with. Snyder is at his best when he’s putting Batman in a race against time where his greatest weapon is his will to win.

It’s pretty fitting that Jock ends up being the artist to bring this story home since it started with him. I thought he couldn’t do any better when he had Batman in the frozen tundra squaring off against Mister Freeze, but his work is so versatile, he can bring just about any setting to life. It was as if Washington D.C. itself was working to stop Batman as much as the bad guys were.

The side story centered on Duke comes to a mainly awesome conclusion. Snyder obviously really wanted to keep a close eye on this character’s evolution and “The Cursed Wheel” does just that. It’s rare we get to see such a character grow from the ground up anymore, I’m actually quite intrigued to see where else this character’s training leads him. Francesco Francavilla’s atmospheric, creepy use of light and shadows has always been perfect for this story and nothing has changed in that respect.

Bottom Line: Snyder’s strongest asset is his ability to go for broke on every page of every issue and this issue is the poster child for just that. This story has its foot on the gas from the start and never let up, even in the conclusion. All Star Batman is going to be placed easily in the top 5 list of things we’re discussing ten years from now when we talk about what Snyder brought to the legacy of Batman.