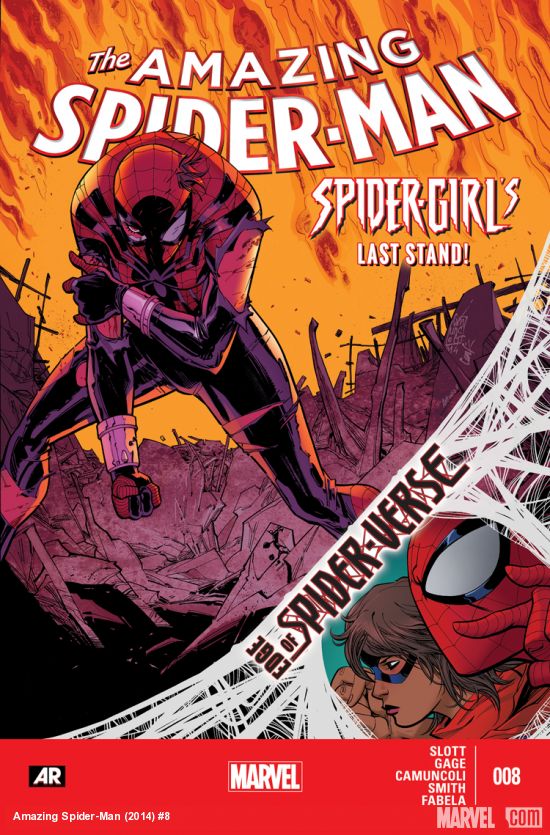 It is safe to say that Ms Marver (Kamala Khan) appearing in your book is the equivalent of having Andre Three Stacks (Andre 3,000) on the track with you, right? That’s the beauty of what happened in the second installment of this team up issue. Kamala is the coolest fan-girl in the game. She is frozen watching Parker handle Dr. Minerva (also known as the big Kree monster) with his experience and skill. Parker recognizing that Kamala is standing dead center Frozen calls out a for the Sling shot maneuver which he has used with Carol Danvers. Kamala immediately recognizes. We then see Kamala swing Spider-Man around like a ball and chain before releasing him for that one hitter quitter. 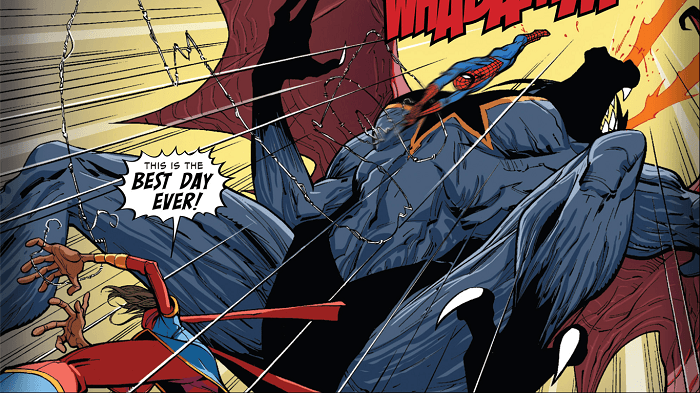 The rest of the issue involves Kamla going do or die to protect the baby that hatched from the pod that Dr. Minerva has been trying to steal. Spider-Man has Kamala play running back to protect the child while he distracts Dr. Minerva. We see one of the henchman turn sides and re-calibrate weapon as a sonic blaster against the Dr as well. Ms. Marvel then calls the doctor’s bluff about the Kree army she has waiting which Parker then surmises that the bat shit crazy doctor is all on her lonesome. A realization he uses by calling The Avengers to inform the Kree. This sends the villain running with Spidey and Kamala getting the win this time around. Parker recognizes the henchman then offers him a second chance (by telling him to contact Parker Industries). Peter proceeds to dap up the new Ms. Marvel.

That shit was bars. We also see Cindy Moon go about making a impression for herself with a new costume this time around. Also, in the back up story. We get our girl May Parker having to fight off against the threat that has been eating the Spider-totems across the universe. The alternate universe Spider-Men arrive too late as May sees hears Peter and MJ killed and she is left defending her younger bother and swearing to kill in order to avenge her father.

It was a feel good issue till that glimpse into May’s world happened man. The spider-verse cross over is shaping up to be mad serious right now.