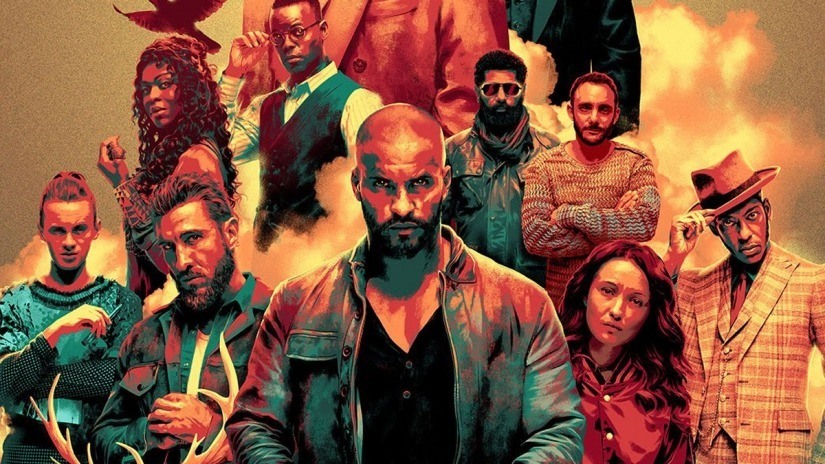 This week, American Gods, the Starz adaptation of Neil Gaiman’s popular novel of the same name, returns — but the path from its exciting, bunny-filled finale of the first season to the first episode of its second season has been surprisingly rocky. Season One showrunners Bryan Fuller and Michael Green departed on not-so-friendly terms, after butting heads with the producers over the show’s budget and with Gaiman himself over the show’s direction. And when Fuller and Green left, two gods went with them: Gillian Anderson, the new god Media, and Kristen Chenoweth, the old god Easter. Both departed saying that their involvement was very much contingent on Fuller’s. But the show must go on! And in this case, it did, with Gaiman taking over more creative control and the rest of the cast seeing things through with the story of Mr. Wednesday and Shadow Moon.

Getting Started in Season Two

The first season ended with a mini-rumble at Easter’s home, during a pastel-colored party she held with more than one Jesus in attendance. Wednesday and Shadow arrived to convince her to join their side in the coming war. She made a show of her powers in assent, intimidating the new gods and stirring Shadow’s faith in the old, while Wednesday revealed that he’s the head honcho in Norse mythology, Odin. Mad Sweeney and Laura, who had been on their own little adventure, also arrived at the party, Laura having tracked Shadow’s glow there.

Season Two begins where One left off: Wednesday, Shadow, Sweeney, and Laura have left Easter’s party and are now headed to the House on the Rock, the center for nostalgia, kitsch, and the kind of American mythology to which the old gods relate. Meanwhile, Mr. World and Technical Boy are regrouping after the tiff at Easter’s, and Mr. World demands that Technical Boy find Media. Why, exactly, did Media leave? Well, the episode’s attempts to explain away the show’s two casting departures are sloppy and, unfortunately, transparent. Media, who can no longer be portrayed by Anderson in Lucille Ball or Bowie cosplay, is just captured conceptually. Her interaction with Technical Boy is just that — conceptual, bland, and a bit unclear. Easter’s absence is a bit more believable, because it conveniently reworks what we can assume was originally meant to be a throwaway scene from the finale. Wednesday had run over some of Easter’s rabbits on his way to her house. Easter found out and is now too upset to join them. OK, I’ll bite, but the move sucks all of the air out of the wonderfully cinematic climax of Easter’s reclamation of her powerful old-god identity, Ostara.

In fact, much of the first episodes of Season Two just feels like a deflated version of the brilliant, engaging, entertaining show we got two years ago. Despite the fireworks ending of the first season, the second season drags its feet. We’re headed toward the direction of war, we know, but we seem to have lost our momentum as the show shuffles along. The big scene at the House on the Rock — which was always going to be perhaps the most challenging for the TV show to adapt, because it was another of the book’s more conceptual moments of imagination and transformation — was underwhelming and slow-moving, with garish effects.

Not everything has lost its glimmer and shine, however. Orlando Jones, as Mr. Nancy, is as charismatic as ever, and a pleasure to watch. In a scene that will surely serve as a salve to those still smarting from Green Book‘s Best Picture win at the Oscars last month, Nancy is in the car with a sleeping Wednesday, a large bucket of fried chicken prominently placed between them, and Nancy mutters to himself contemptuously, “This motherfucker asks me if I want something to eat, and then he gets in the car with a bucket of fried fucking chicken!!” before throwing the entire bucket out of the window. Ian McShane is still the perfect Mr. Wednesday, while Yetide Badaki, as Bilquis, manages to embody total, unrelenting sexual energy every time she’s in a scene. We get more of Mr. World, a role that allows Crispin Glover to show off his uncanny ability to represent an amalgamation of every ghoulish goon who’s ever been, in fiction and real life. And then there’s the odd chemistry between Emily Browning and Pablo Schreiber, as Laura and Sweeney.

It looks like Season Two is setting things up so that Laura and Sweeney will continue to travel together; Sweeney mentions that he may know a demon in New Orleans who can bring Laura back to life. Meanwhile, Salim is still following his lover, the Jinn, and they soon go off on their own journey to retrieve a weapon for the great war to come. All of this sounds enticing, sure, but the problem is how it makes the show feel like it’s taking the unnecessary scenic route to its big moment. Gaiman has said how he looks forward to including more gods and mythologies in the series that he couldn’t include in the book. As appealing as that sounds, it may turn into an issue of the writer world-building for the sake of world-building, at the expense of the narrative.

Filling In The Blanks

Even the backstory we get about Shadow early in Season Two, while it thankfully fills in some of the many blanks the character had in the novel, feels misplaced. Its relevance at this particular point in the story (as opposed to, say, earlier, or later, when what we find out about Shadow’s past can be more directly parallel to Shadow’s present) is unclear. Despite all of Ricky Whittle’s real-life charms, Gabriel Darku, as a teenage Shadow, is much more sympathetic and engaging — but that’s a fault of the writing of the character, not of Whittle’s acting. Young Shadow is smart and compassionate and seems to lack the jaded passivity that older Shadow wears as a semblance of a personality. The backstory tries to explain at what point Shadow lost his personality and agency. It’s something related to a tragedy and the state of racial affairs in the country, but if that’s all we’ll be presented within the season, that won’t be enough. Time will tell, and hopefully we’ll get more of Darku to let us know how Shadow Moon became Shadow Moon — and more about how Shadow’s interactions with the world are colored by his status as an ethnically ambiguous-looking (but decidedly half-black) person of color.

Gaiman fans know the writer has no dearth of imagination, and here his playground, which exists at the intersection of Americana and multiple world mythologies, is rife with possibility. That would appear to be a recipe for success — until it isn’t. The show will still need the daring and urgency of the first season if it’s going to remain the dazzling adaptation it once was. We’ll see what Gaiman and his gods deliver.