First and foremost, American Vandal is the first world problems “Who did it?” thriller we deserve. The truest American drama of our generation. Secondly, lemme shout out fellow staff / Hufflepuff gang member, Izetta Nicole for putting me on American Vandal. I’ma tell you like she told me, “So, it’s a doc in the style of Making A Murderer but it’s all about this kid being accused of drawing 27 dicks on the fa–.” Off the strength, I said, “say no more.” I looked at the trailer and instantly I was with the shits. I am a huge fan of humor and committing to the joke. For American Vandal to take something as simple as graffiti dick vandalism as its main premise, I had to see how this would pay off in a mockumentary format, how seriously they would take themselves, and most importantly, how long would they commit to the joke of the dicks?

American Vandal places immediately places us on the scene of Hanover High School’s faculty parking lot in the aftermath of what appears to be a school prank. We see news reporters on the scene, teachers in shock, students laughing, and then an overhead view of twenty-seven cars with dicks drawn on’em. Fam, somebody Sistine Chapel’d dicks all over the teacher’s cars? I mean, that shit is funny to me only because whoever was able to draw twenty-seven dicks then erased the security tape of the time the crime was committed, clearly had a plan. Whoever did this shit was a Black-Ops Seal Team Six cadet in training with a vendetta or very specific sense of humor. But ain’t shit funny when this gets filed as a felony vandalism charge with $100,000.00 worth of property damage. Dylan Maxwell (Jimmy Tatro) most definitely ain’t laughing since he’s the one being charged. Dylan fits the profile of the person you would expect to have done this (“you can tell just by lookin’ at’em” becomes a theme) but the main case against him? They’ve got a witness, Alex Trimboli (Calum Worthy) placing Dylan at the crime, motive, conflicting testimonies, and the fact that… Dude’s a known serial dick-drawer. 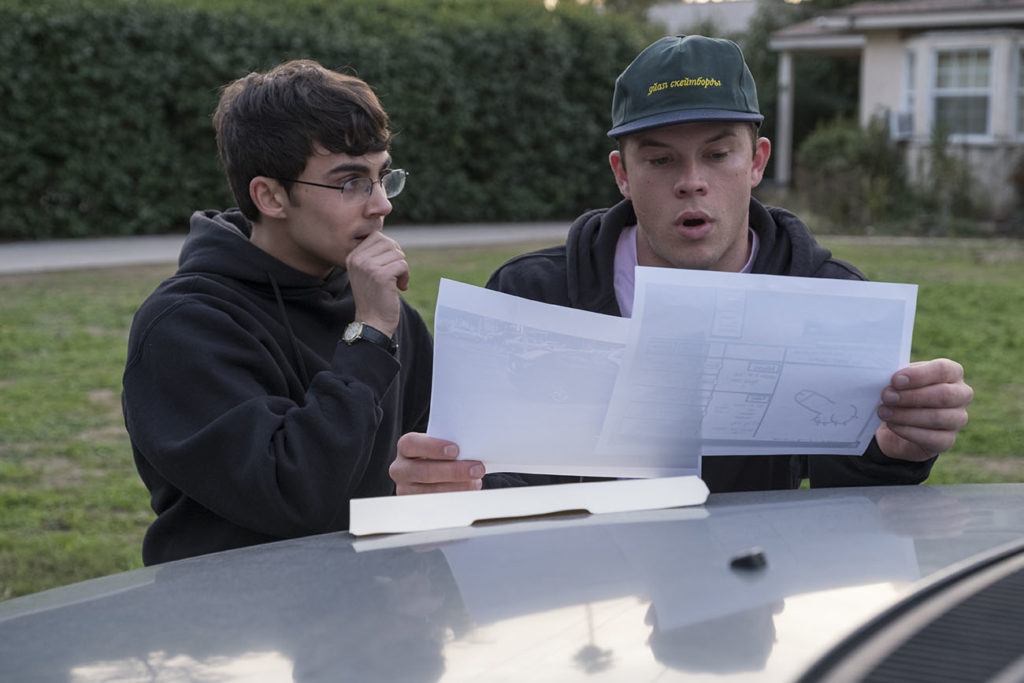 This should be an open and shut issue but there are some noticeable inconsistencies. That’s where documentarian in training, Peter Maldonado (Tyler Alverez) and future forensics specialist, Sam Ecklund (Griffin Gluck) come in. They’ve been documenting the case against Dylan and they noticed that–I honestly can’t even say this with a straight face– All the dicks Dylan drew have hair on the balls (ball hairs), the ones made by the vandal on the cars don’t. Plus, the tips of the dicks are different too, the vandal’s are more heart-shaped, where as Dylan’s are narrower/simpler. Dude… I. Was. Fucking. Dying. At. This. This is the key discrepancy that opens the floodgates for more questions.

The funniest shit is seeing Peter trying to use those facts as evidence to cast doubt on Dylan as a suspect and teacher’s lookin’ at him like, “you serious with this ball hairs arguemnt?” Peter is tho, he really is. That’s what makes this mockumentary work. There’s no “Jim stare” into the camera no matter how ridiculous things get for this case. American Vandal takes itself seriously (just enough) and it’s this factor that changes your thinking from “alright, this is going to get old” to being four episodes in and shouting at the screen “He re-enacted that dick drawing too well. THIS IS A SETUP!” 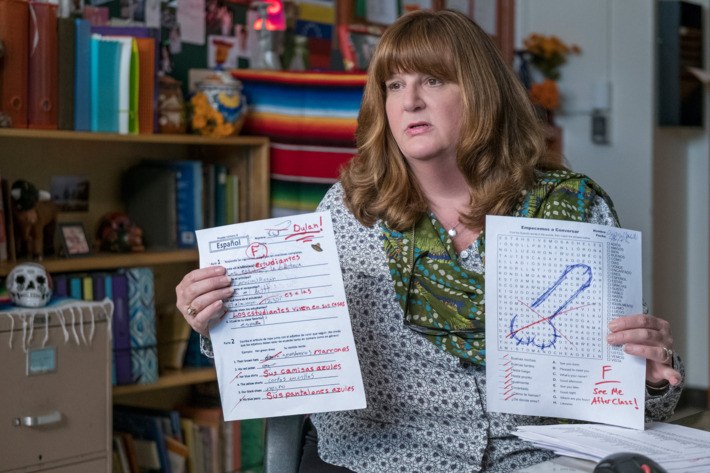 American Vandal is a comedy but you forget that watching it as the consequences of the vandalism become real for Dylan. Dylan is expelled, has a court date, he’ll have to pay $100K in damages. This “joke” stops being funny as Dylan’s future becomes fucked over something he says he didn’t do. This series becomes a hunt for the truth and it pulls you in. The high school setting is perfect and naturally creates territory for hilarious moments. When key witness, Alex Trimboli’s character gets put under a microscope over him bragging about a hand-job from Sara Pearson (Saxon Sharbino), who is way out of his league, Peter, Sam, and Sam’s best friend, rookie getaway driver/ crime consultant, Gabi Granger (Camille Hyde) go back to the campsite and investigate where the hand-job went down.

Who could have seen it? Does it seem possible? Is this in character for Sara? Son, they did a fucking CSI scale of the hand-job taking place with 3D CGI models. This is incredible writing, it’s fucking platinum level humor. Again, it’s so ridiculous that this is all based in high school drama and rumors being investigated, but it works. The format of the show makes it necessary to analyze certain rumors and drama in order to see if it correlates with the case at hand, it’s brilliant. American Vandal lowkey serves as social commentary for social media, technology, and the line for the things that are relevant for a documentary that should be shared and the things that are too personal and don’t need to be included in the context for the world to see. 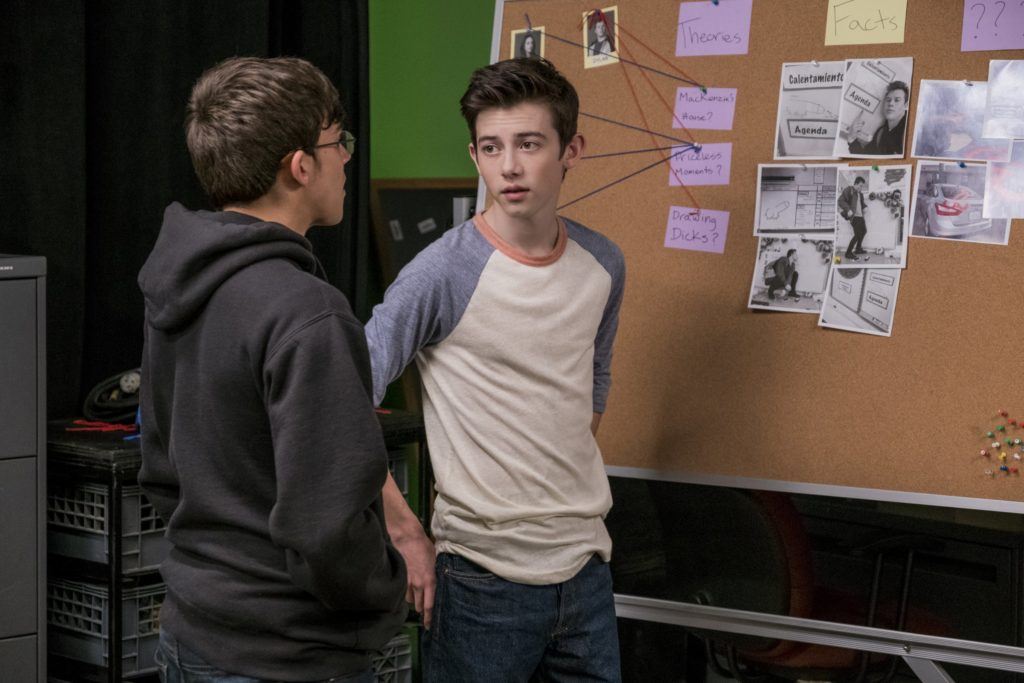 When the documentary catches some steam, there’s so much hindsight (from being young with tunnel vision) on Peter part that he finds himself realizing he could have handled certain things better. This goes for Sam as well. Yeah, this show is not only giving us humor but they got bars on social commentary, youth in revolt and even challenging the status quo and chain of command? I’m with it. The teachers aren’t safe from scrutiny in this series either and the shit that gets uncovered? Maaaaaaaaan listen, who knew a bunch of graffiti dicks would uncover cover-ups, conspiracies, and reveal the true colors of a school’s administration?

I ain’t even tell y’all the half with American Vandal. I’m leaving the rest for you to go see. You think I’m joking, but watch, after that first episode, you’re goin’ be like, “I see where you coming from” and once that second episode finishes, you’re going to have a list of students and teachers you think are guilty as all fuck. This is the millennial mystery we deserve, Nancy Drew and Encyclopedia Brown ain’t gutta enough to tackle these cold cases but you know who is? Peter Maldonado, Sam Eckland, and Gabi Granger. Watch the squad get their CSI on in a teenage wasteland on American Vandal and ask the hard-hitting question, “for real, who had the time to draw all these dicks?” 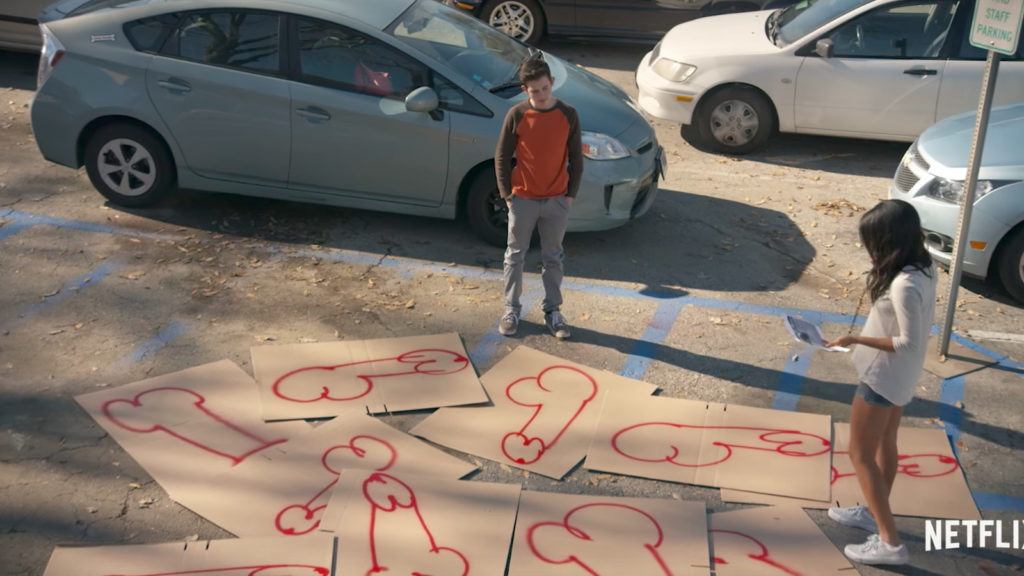