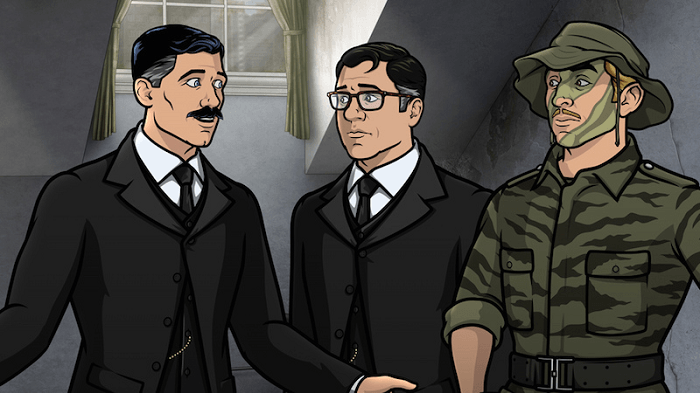 1) I thought this was a really good episode of Archer. I thought mostly everything worked, everyone in the episode had something to do and were usually hilarious at it (even if it was Krieger being continuously knocked out by tranquilizers). I thought overall it was hilarious with some very tried and true Archer tactics.

2) I can’t be the only person that has no desire to see Lana and Sterling together in any capacity again. It’s been six seasons of this, yo. Maybe we will still get it, but I see a lot more potential in Lana and Sterling having this baby together but actually seeing other people and making each other jealous in physical form instead of the abstract and theoretical. But I suppose that’s a personal taste thing. It’s an animated show, so some things change, but most stay the same. This is one dynamic that could have changed.

Back to the episode, pretty damn funny. The premise that a prince from Durhani is coming to the United States on an internship (which constitutes Affirmative Action to Malory) and for some inexplicable reason, the CIA wants to spy on him. This means that they need to find a way to bug all of his equipment when he visits a potential house (owned by the Tunts no less) with an overly complicated plan by Slater. Also, bravo everyone involved with making Christian Slater a fixture for this season. He’s GREAT. His dynamic and personality is a perfect complement to the incompetence of the spy agency formerly known as ISIS. Of course, the driving force of the episode is the aforementioned relationship between Lana and Sterling. While I’m not a fan of the existence of that particular situation, but the execution was done well. The triangle, from the very first episode of this series has been between Lana, Sterling and Cyril, so watching Cyril try to manipulate the situation so HE could get back with Lana, only to aid their, cough, “joining” by episode’s end was particularly funny. That and his terrible timing.

Two other things of note… First, I know this is an animated show, on FX no doubt, but this episode really pushed for the premium channel rating. You hear the words dick and pussy on cable plenty, but they are usually in the abstract, not in the context of talking about sex explicitly. And of course, watching Sterling and Lana have sex was a lot more graphic than I anticipated. Funny and shocking, but still surprising.

The second, if this this felt like a good episode where everyone got to do something it’s because they didn’t have to worry about any removed b-plots to cut away to. Ray’s fight against the little shop of horrors plant was somewhat that, but he was still part of the main plot.