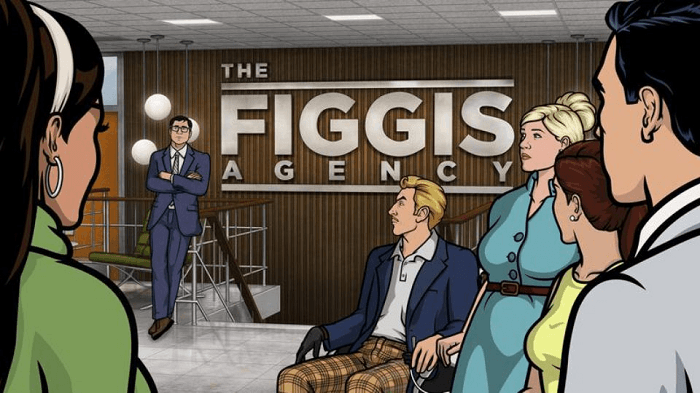 The problem with one of your favorite shows not being as great as it once was isn’t that the show has gone bad. It’s that its lost a little of it’s fastball and isn’t dominating like it once was, even thought it has the capacity to have flashes of when it was brilliant. Season six had many of these moments, getting back to form after the experimental Archer Vice (season 5), but having plenty of episodes that just fell flat. Season 7 has begin in this vein, an introduction to the new “Archer-reality” while offering a lot of good but not great jokes along the way.

After another season of being disastrously bad at the current job, the group formerly known as a spy agency that got disowned by the CIA is now a private eye firm with not many prospects. When a former movie star waltzes in, claiming she wants to hire them to “steal back” some sensitive material she claims was stolen from her, the crew is happy to jump at it so they can deploy their ‘hardly useful any more’ skills. The plot of them breaking into someone’s house to steal something for a shadowy client, goes about how you would expect, all very true to form for the circumstance and what we’ve learned from these characters over the years.

A lot of the humor, Sterling’s insecurity with not being the man in all facets, Malaria’s shade being on 9000 or Cyril puffing out his chest every chance he gets are all familiar and right at home in the Archer canon. Sometimes, too familiar. Adam Reed and the producers are still great and toeing the line between new laughs and referential ones (though this episode called back one of my favorite ones, Lo Scandolo from season 4). It still works here in Season 7, but it’s anybody guess how long they can keep this up or when the jokes will be come so inside, they nonsensical to non-hardcore Archer fans.

The show, as it has in recent seasons, looks great in its animation. It is much of what you would expect (some change to Lana’s hair) except in a different setting (L.A.). I do love how the creators aren’t scared to play with the presentation or promos for the show, depending on the theme of the season like they did for Archer Vice. The noir character silhouettes and drop-ins fit the private eye storyline for this season, even if these characters are anything but understated or subtle. Either way, I’m curious to see what comes next.