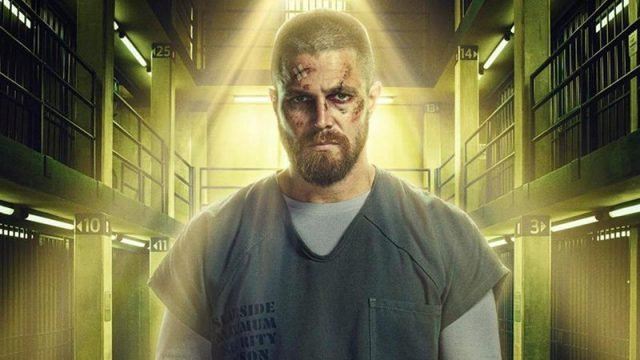 Last season left Ollie in a bad way; Diaz escaped, Lance died, and Ollie gave himself up to the feds to give the rest of his team immunity from being vigilantes. Now, locked up with many of the criminals he put away himself, can Ollie survive prison life?

It’s been five months since Ollie gave up his identity and freedom, and he isn’t faring too well in prison. The inmates know who he is and make no bones about threatening to take him out. Ollie is trying to keep his head down and not cause any trouble so no extra time is added on to his sentence, but it’s hard when Bronze Tiger is eyeing to shank Ollie in the lunchroom. Even though he’s clearly protecting himself, the guards give Ollie a warning for being involved in a fight. I can’t tell if the guards are corrupt of just don’t give a sh*t but they clearly are bad dudes. When Diggle comes to visit I expected some kind of “we’ll make sure this prison is legit” or something along those lines, but Diggle is more concerned with how passive Ollie is being. I don’t know what he expects of him, but Ollie isn’t having it. All he cares about is serving his time, so he can return to Felicity and William. 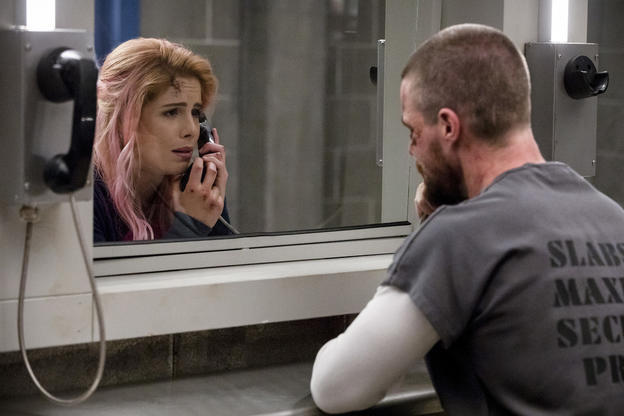 Meanwhile, we see how the rest of the team is adjusting to life, post Arrow. Dinah is the new captain of police, Diggle is an Argus agent along with Curtis who’s the head of R&D, and Rene is teaching boxing to the local youth, along with his daughter. Felicity, sporting dyed hair and piercings, and is in witness protection working as a barista. Everyone is doing what they have to do to move forward until a new unknown Arrow shows up with his own list of criminals to take down. Most of the old team wants this new Arrow out of the picture, except for Rene. Still living in the Glades, Rene sees the new Arrow as hope for the people there. Going as far as helping the new Arrow escape Dinah and the police.

“Keeping my Head Down”

Back in prison, Brick and Derek Sampson try to force Ollie to work for them by threatening to send people after his loved ones. Ollie stands up for himself, but he completely ignores an inmate who tries to be his friend (or sidekick) in order to get protection. After getting the sh*t kicked out of him, he accuses Ollie of being a coward, to which Ollie can’t dispute. He’s losing himself in prison but it’s all to see his family again.

Trying to live their lives, Felicity and William’s safe house is discovered by Diaz who tries to kill Felicity. At the same time, Ollie is attacked in the shower, and we get a really well choreographed back and forth fight scene between Ollie in prison and Felicity trying to survive Diaz. Ollie beats down a few inmates before getting sucker punched by one of Diaz’s goons and told that Felicity is dead. On the flip side, Felicity is struggling but holding her own against Diaz until he overpowers her. Just before he pulls the trigger we cut to commercials, and we all know what that means for an actual death of a main character…that there isn’t one.

Yes, the fakeout of Felicity’s death was short lived as she comes to visit Ollie in prison. Ollie begs her to go back into hiding, but she refuses and decides it’s her turn to fight back. While that wasn’t the outcome he wanted, it does light a fire under him, and he proceeds to beat up Diaz’s goon and the Sampsons; stating they should have killed him while they had the chance. Ollie is about to run the yard, and I’m here for it.

Lastly, we aren’t getting any flashbacks this season, instead we’re getting flash-forwards. We see a man traveling to Lian Yu, there he runs into a hooded individual shooting arrows who turns out to be an older Roy. The man himself, is William. It wasn’t the best season premiere, but it was good, and the foreshadowing has me intrigued. I’m excited to see what the show has in store for us this season.