This week’s episode is all over the place, but in a good way. Every character is getting plenty of screen time and development with plenty of gray areas for the viewer to dive into. While some actions can be frustrating to watch, the episode does a good job of portraying why the characters are acting the way they are. Pulling back on the super hero antics and pushing forward the character development has this season off to a good start and I’m here for it. 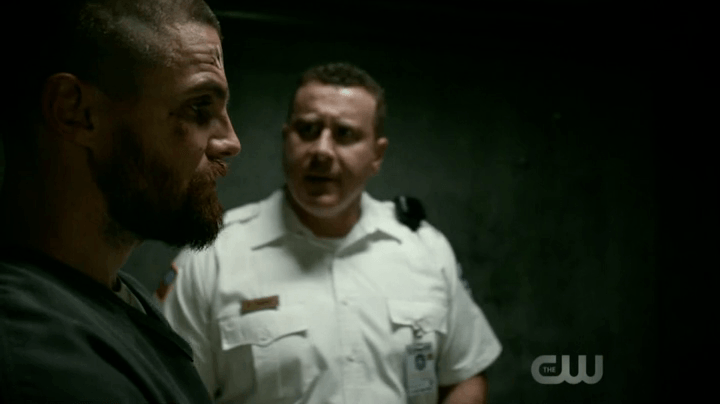 We start out with Ollie doing push ups in solitary confinement, ‘cause what else would he be doing, before being let out by our favorite guard, Peter Yorke . He has a bone to pick with the “rich and entitled” ex-hero and isn’t afraid to let him know.

In the meantime, the old gang are busy discussing how to go after Diaz. Felicity is hell-bent on catching him and the rest of the team is split on how to go about it. Rene is all for it and even wants to include the new Green Arrow, whoever he may be. Diggle and Dinah want it done by the books and legally. Curtis just enjoys his new job and doesn’t want to ruin that, and I don’t blame him. If anyone gets caught stepping outside the law then everything Ollie did would be for naught. So chill Felicity (spoiler: she ain’t chillin’.)

Meanwhile, we get our first look at the Longbow Hunters, and so far they seem like a good step forward for the shows villains. I’m not the biggest fan of Diaz, he never seemed like he should have been as big of a bad guy as he was last season. So getting some intimidating bad guys to put around him makes him seem more threatening. Struttin’ with both muscle and tech, Red Dart, Kodiak, and The Silencer were introduced and feel like the big time bad guys the show was missing last season. They break into an A.R.G.U.S. site to steal a special battery that can power a very dangerous weapon which propels A.R.G.U.S. (and Diggle) to take action. Felicity wants in and Diggle asks for trust from her to handle the situation. 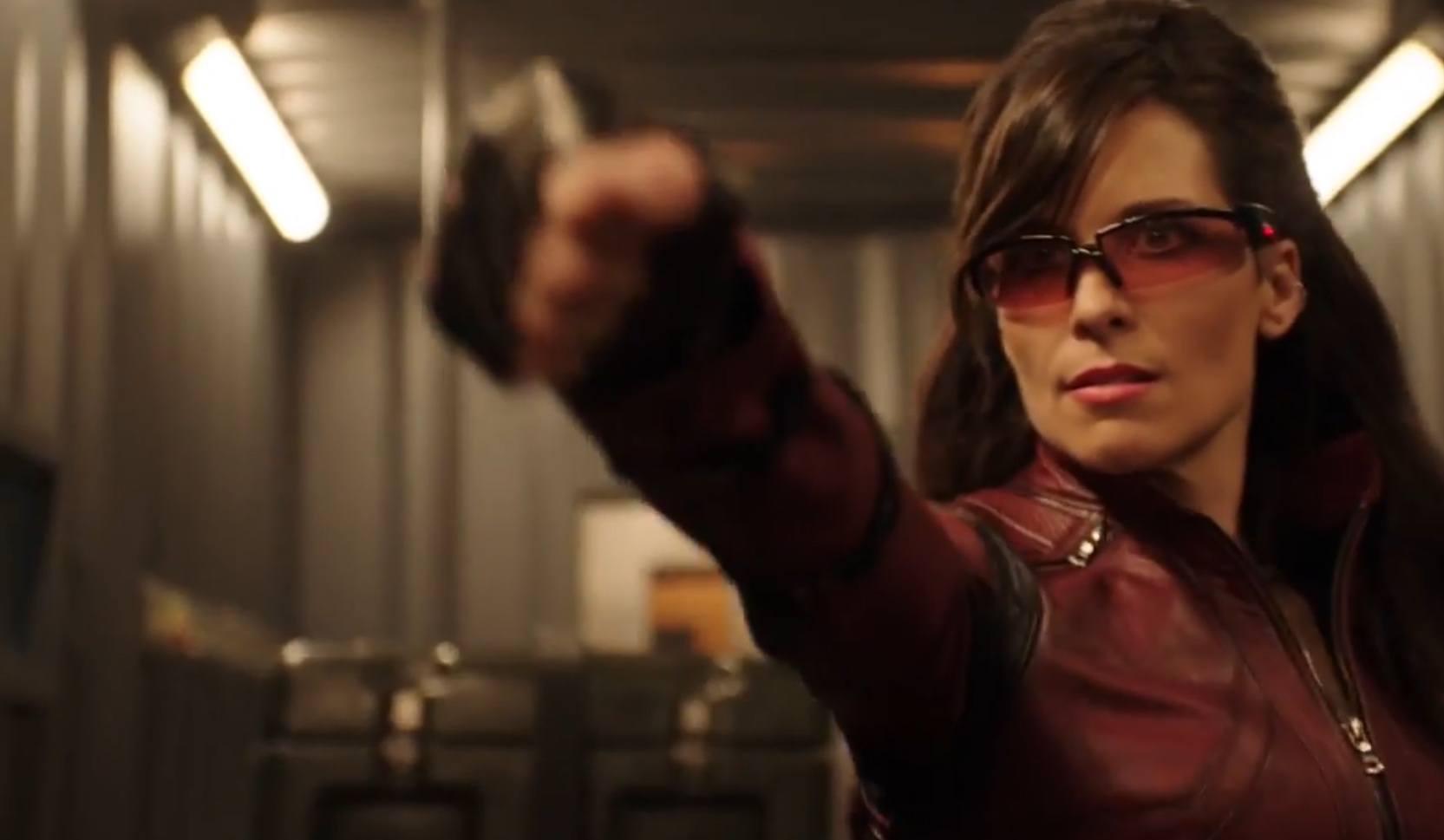 Dinah and Laurel butt heads over how much “protection” Laurel needs now that the Longbow Hunters are in town. Dinah couldn’t care less if Laurel gets killed and considering Laurel killed her ex partner, who could blame her? Laurel feels she can take care of herself. The two end up clashing with The Silencer, who has tech that can stifle all sound around her, including the duo’s sonic scream.

Teaming up, they are able to fend her off and even come to a very… very small understanding. Laurel, in a rare showing of vulnerability, tells Dinah she is sorry for killing her partner. With Quentin dying last season and being the only person to show Laurel any kind of compassion and care, Laurel understands how Dinah feels. It was a nice surprise to see this. The character needs to evolve if she’s going to be on the show and this is a good step in the right direction.

Felicity can’t wait for A.R.G.U.S and Diggle to move, so she decides to go off on her own after finding where the battery should be. Curtis joins in and ropes in Rene to keep her safe. Turns out, A.R.G.U.S was just as close as she was and they end up blowing A.R.G.U.S’ chance to find Diaz. While Diggle is frustrated, he understands where Felicity was coming from. Diggle admits that even though he was asked to carry the mantle of the Green Arrow, he chose not to because he didn’t want what happened to Felicity and William to happen to his family.

Working together, they find the Longbow Hunters on a train along with Diaz. Felicity wants Diggle to take him down but his priority is retrieving the battery to keep the super weapon out of his hands. Diaz escapes and Felicity vows to find someone who will help her take him down. She goes to the FBI and tells Agent Watson that it’s time to hold up her end of Oliver’s deal to capture Diaz.

Ollie tries to leverage Brick for info on Diaz. Brick tells him he has to take out guard Yorke in order to get that info. Oliver tries to find a away around it to get him sent away but comes up empty. Brick, telling him it has to be done now, hands Ollie a shiv to take him out. Instead, Ollie confronts Yorke and angers him by mentioning his wife and kid. As Yorke reaches for a baton, Ollie grabs his hand and forces him stab Ollie with the shiv. Making it look like Yorke did it, the other guards drag him away. Ollie may have ruined his life but at least he’s still alive right…?

In The Future Of Now

In our flash forward, William shows Roy the rock Felicity gave him, which happens to have a GPS tracker in it that led him to the island. After some trepidation, Roy shows him a grave that was separate and different from the others on the island. They dig it up and find the old Green Arrow suit and equipment. Roy seems to understand what this means and tells William they are heading back to Star City. We haven’t gotten much yet, it’s only been two episodes, but from this it seems to suggest that the new Green Arrow running around might be an older William, possible involving time travel. I won’t lie, I hope I’m really wrong about that. Somehow they have to tie what’s going on in the future to what’s happening in the present and that seems like a lazy way to go about it. 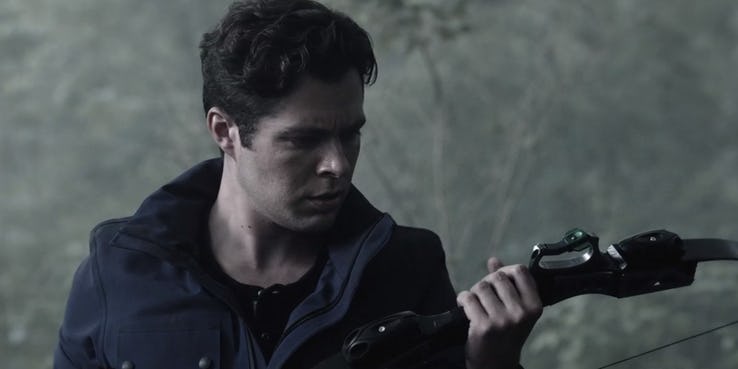 Overall, “The Longbow Hunters” is a solid episode. The season is off to a good start and I hope they keep building upon what they’ve set up. The character dynamic and drama is well written and well acted. Everyone has strong motivations for their actions, no one is completely right or wrong, and I like that complexity. We’ll see if next week will be the same.

Watching Arrow? Find BNP’s other reviews of the series here.