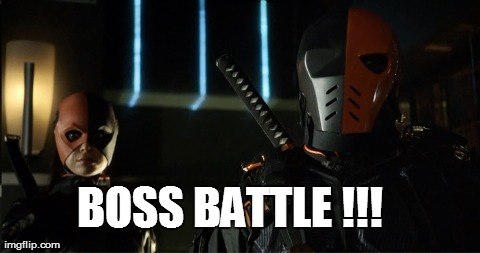 The Season two of Arrow dropped tonight and it was on some major motion picture shit! Sun! I’m talkin

This episode tied up all the loose ends, all of the choices Ollie would have to make. All the residual feels and thirst Slade Wilson was going through. It all came down to this episode. I was hoping it would not leave me disappointed. I wanted to see Slade Wilson in his element shitin’ on cats (no flushing! Mad disrespect)

The players come together right off the bat. We get Roy back in action and off that Mirakuru Molly Water. Ollie expresses the need for him on the team with a gift that has been long over due. Roy Finally cops unlocks “the vigilante mask” achievement. It’s really about time cause using only an abercrombie hoodie as a disguise. No. Might as well be fighiting in skinny jeans and a scarf sun. Diggle and Wifey back, We get Sarah back with the reinforcements… Nyssa and The whole damn league of Assassins. Oh yes.

The cure for Mirakuru loaded up in…(sigh)”Injection arrows” is the main weapon in the arsenal Team Arrow. They get the drop on Slade but he escapes. Now Ollie is trying not to kill but he is getting constant pressure on all sides that to win he needs to be a killer again. Nyssa tells him his restraint is what cost the city, Detective Lance informs Arrow that Slade has Laurel and that “I know you’re trying you new non lethal method but… It’s time to bring back that murder muzik my dude. Straight up. This guy has my daughter, so you need give him the “What happened to that boy” / “blood on his timbs it reminded me of them” Clipse Verse

Which becomes the main struggle of this entire episode. Slade has taken all of the options of restraint for Oliver. Killed His Mother, killed innocents in the city, wreaked havoc on his home and everything he knew so there is little to no option but to put this man the fuck down. However Felicity aka Starling MIT class of 2009 gives tells Ollie how to make the play against Slade. Use Slade’s own strategic plans against him. Which leads to one of the best pawn moves of the year, Felicity unknowingly knowingly signs up as bait.

Now lets not forget we still got Amanda Waller Ready to nuke Starling since we got super soldiers running amok. Enter Diggle and Wife pulling their best Mr. & Mrs. Smith impersonation. They break out the Duck Hunt High Score Gawd Deadshot out of prison and get into a gun stand off with Amanda Waller. Thea Queen plays a small part. She actually shot Merlyn last episode and he couldn’t be more proud of his little girl (kevlar saved his life). Thea Winds up finding out that Roy although better now and promising to leave the city with her, was actually working with the arrow (although he said he wasn’t) and she is fed up and decides to leave with Malcolm Merlyn to whereabouts unknown…… (good riddance I say)

I don’t want to spoil the end entirely or how Felicity and Ollie take the Oscar for best fake out moment of the year but the final fight between Ollie and Deathstroke plays out beautifully. The fight coincides with when they last saw each other on the Island. We see how Slade caught the arrow to the eye (it was on some technical shit too. Ollie was talking like he IP Man’d him when he got ALL THE LUCK”) and present day where they are now both on an even playing field. The fight goes beautiful and the ending plays out as you would expect. Amanda Waller calls off the drone strike.

We get a supermax reference as the easter egg this episode (Supermax was supposed to be the name of the Green Arrow movie of him escaping from prision). It all comes full circle in the end but we also learn that there is more to Ollie Island Entrapment. So as the Slade Wilson Backstory comes to a close

Enter The Amanda Waller Back Story