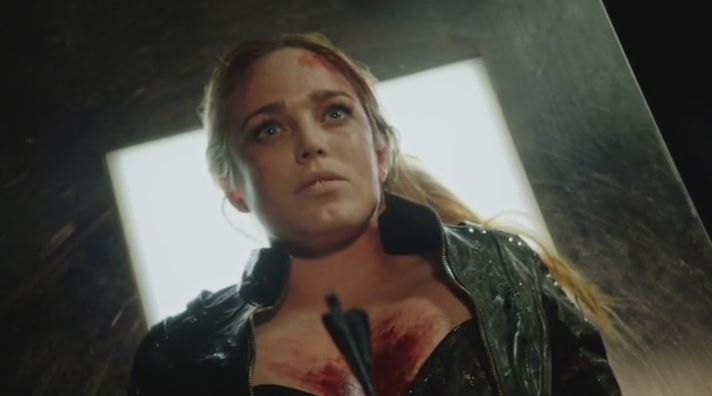 Laaaaaaaaaaaaaaaaaaaaaaaaaaaawd things are looking rough in Starling City yall. Someone out here shooting vigilantes. The episode opens up with Ollie and crew coming into the “Arrow Cave” (should really be called “The Quiver” as Injustice Harley Quinn suggested) to see Laurel sitting with Sara’s body laid out spread eagle on the table. Merkd. I know it’s a trying time with your sis dead Laurel but you coulda waited outside the door to greet the team, give them the heads up then walk them into the room with their friend’s dead body out chilling. That’s just common sense 101.

The whole crew breaks down like a scene outta Dawson’s Creek (pick any scene with pre-Fringe pacey in it) mourning their friend. Ollie is straight up in his “murda murda my mind state” demeanor. Straight G’d up from the bowstring up.

Ollie gets his Sherlock on at the crime scene where Diggle shows up and let’s him know he jumping back into the band until they find Sara’s killer. Detective Lance hits Ollie on the cellie to tell him there is another copy cat archer in town killing folks (he must have been a fan of season 1). After punching some street goon in the dick when he failed at parkour away to escape (shit was hilarious) Team Arrow gets a lead on one archer that fits the MO and wears a mask (looking like my created character in DC Universe Online).

Meanwhile on the drama side of things Felicity finds out that Roy been keeping the whole “Notebook” note from Ollie that Thea dipped out alone. Before she can squash that Felicity has to handle Ray Palmer buying the best buy she works at (side note: Felicity called out saying there was a death in the family. you know any real retail boss woulda been like ….”and?”. Macy’s don’t play that shit unless you bring in the death certificate b) sending her flowers to apologize for stealing Queen Consolidated, and really just being all rape culture everything in his pursuit to get her to work for him. Ray then flips it on some Jedi mind trick “you’re not really mad at me its something else” when Felicity says no again. Come on. I can not with this portrayal of the shrink gawd Palmer man.

Ollie tracks Komodo down and we get to see an arrow slinging battle on top dirt bikes. The whole fight scene had a real Road Rash (Sega game) feel to it so you know I was down. Ollie wasn’t doing much until he struck Komodo’s bike but Komodo decided to get on top his bike while it was sliding and get that shoulder shot off on Ollie. The dude ghost rode the whip then hit Ollie with an arrow.

Laurel sees Ollie letting Clint Barton down with that ass whooping before storming out and beating Team Arrow to the punch on chasing the folks Komodo is being hired to kill next. We see Laurel force her way into one target’s hospital room then put dude’s broke arm in a Brock Lesnar Kimura lock to make him cough out info that he and some other dude’s were into some illegal shit involving oil pipelines. That’s why he was being hunted by Komodo but before he can snitch anymore Komodo put the stitches to his ass with an arrow from full court about a building away. Meanwhile back at the quiver Felicity starts breaking down with Sara’s death making her realize she wants more from life than going out like that. Ollie still on his real vigilante shit says, “Many men. Many, many, many, many men…. wish death on me”.  Which translates  to him dying like Sara is the inevitable future. Felicity isn’t here for that.

Laurel runs back to Ollie to tell him the info on Komodo’s next hit thinking she going to ride along. Ollie shuts that down when he tells her she was being reckless, plus if Komodo did in fact kill Sara then that means her arms are too short to box with that gawd. Roy Harper also drops news that Thea is M.I.A hoping Ollie doesn’t shoot him in the leg again. They peace it up and decide to go find Thea after Komodo gets taken care of. The next target just happens to be at a Ray Palmer’s gathering. Komodo comes on the scene crispy and clean about to take dude out when Roy and Ollie show up then proceed to go double Billy and Jimmy Lee Double Dragon on the team up to overwhelm Komodo.


[divider type=”space_thin”]
Komodo peeps game and steps out against Ollie for the final show down like a bit of a fan boy.

“So you’re the arrow?…. thought you’d be taller. Can I get an autograph after we done here or nah?

Still, Komodo lets that bow slang, Ollie blocks his shot, then catches Komodo’s second arrow, hits a smooth criminal spin before sending it right back at him, pinning him to the wall. He is about to interrogate Komodo when Laurel shows up convinced Komodo killed Sarah two nights ago. She got a gun on Komodo but he then drops the best line of the of the episode.

Laurel ignored the speech and shot at him anyway, to her surprise Ollie already took the bullets out. They get outta dodge and find out that Komodo’s alibi was true. Laurel tries to tell her father Sara is dead but can’t. They dispose of the body buy burying her where her original grave is. That’s some cold shit man. It makes sense especially in these hard economic times for Ollie but daaaaaaaaaaaaaaaaaaaaaaaaaaaaaaaaaaaaaaaaaaamn. Felicity shows up at Palmer’s office agreeing to work with him saying she decided she wanted more out of life…. oh, oh, now you not bout that vigilante life anymore when the struggle gets really real Felcity? I guess we’ll see in time.

Through out the episode we saw a glimpse back to Hong Kong where Ollie was tasked to take out Tommy Merlyn who came looking for him when it was notified that Ollie checked his mail last episode trying to get word out he was alive. Another way was found when Ollie captured Tommy and faked being some guy just trying to cash in on Ollie being dead by capturing and holding for ransom whoever showed up. The cops arrive and Ollie leaves Tommy like it was an episode of punk’d. Wasn’t all that important of a look back.

We end out the episode with Thea under Merlyn tutelage taking down cats in some swordsmanship practice. Thea got the Korra hair cut too but…