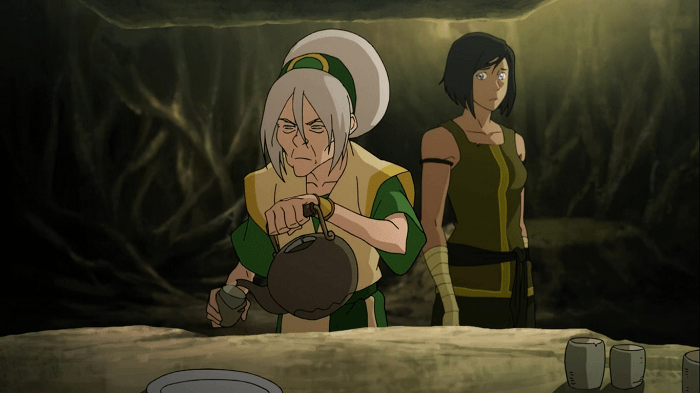 Arrrggghhh, Black Jesus man, I didn’t even have time to get comfortable. A brotha had JUST kicked off his Uggs and was ready to take the water tribe armband off after a hard day of Avatar-ing when I pressed play on some Korra and already I gotta deal with Prince Wu going on about Earth Dames and six hour ceremonies. I assume we’re gonna get some sensitive “this is why I ended up being a sheltered prick” moment from Wu at some point, but right now he is doing THEE MOST. But you know, what, almost all was forgiven on this shit right here:

I mean, I should have something clever to say, that’s like, the whole point of these recaps, me trying to be clever. But like, I…I got nothin fam.

Meanwhile the President is very confident that:

Which leads me to ask a very important question…

It’s been three years yo, tell me this dude is up for re-election in the Fall or some shit. It was bad enough when he was just antagonizing Korra and throwing her under the spirit vines, now he just out here making the worst judgement calls possible? This feels like every presidency AFTER David Palmer on 24. Shit is disgraceful, fam.

Yes, yes y’all, its that shit the streets been waiting on ever since Korra threw them cables on the hip and started bending the cold steel. Benders been hanging out in caves and big ass oaks in the spirit world just hoping we would get some Korra / Toph team up shit. And what’s the first thing that Toph tells Korra:

Then Toph proceeds to give Korra the Slim Charles, “The game just got more fierce,” speech. In a word, Lin Beifong ain’t here for you little world saving accomplishments. AND you better use first names when you up in this cave sista. Toph said “I’m the original Beifong” like she was Monica Rambeau trying to claim back one of her 14 code names. And last but not least, The Original Beifong don’t do the soft shit, fam.

You’ve been put on notice.

Bolin back in the city with Kuvira and the rest of the “unifyers” and expects a hero’s welcome. Or at least someone that recognizes him from the movers. But yo, Bolin’s mover career was always too small for the shoulders he rockin now and the only people that recognize him is his ex-almost-wife and her brother.

Eventually, Mako meets up with Bolin in the hotel lobby and both of them are speechless because they hate each other’s haircuts and don’t know how to tell the other. Bolin tells Mako that working for Kuvira is nothing like being employed by Sauron despite what you’ve heard and asks Mako if he’s been hanging with any ladies, “Mako Style.” Um…pardon my Portuguese but what the fuck does that mean!? I mean, why do I hear Big Boi’s verse on Mamacita in my head when he said that? Yo, the world needs answer as to what “Mako Style” means.

Also, Kuvira had Prince Wu moved out of the Presidential Suite and benders didn’t see the signs, yo? Don’t nobody put you out of room 112 without trying to take AYETHANG you have. On top of that, there’s no crown for the coronation, just like, the earring off of the Earth Queen’s dead body and we gonna call that shit a “broach?” Naw man, things are as bad as they’ve ever been (for a privileged Prince who never had to work a day in his life).

And now onto what has become a generational past time for the Avatar, getting your ass molly whopped by Toph.

Toph lowered the unemployment rate all by herself on Korra, my benders. She giving out that work like she got a landscaping business with a pickup truck, just snatching up the day laborers before making the rounds. If you can’t find a job, then you must not live in Representative Beifong’s district.

For real, she didn’t have to hit her with the Silver Surfer though…

Lets be clear, nobody does anything as well as Toph earthbends. Even the Asami hair flip looks like a toothless four year old in pigtails next to this. Of all the talents and skills that exist out there, that ranking gotta look something like this:

Toph is so in-tune with her ability at this point, not only has she never needed to see, she don’t even need outside information. She got Earth-Internet fam. Earth-Internet. Dirt Runner. Earth-On-Line (EOL). Vine-Zero. She been in the forest getting her info through the Eco system. For fifty years, Toph been doing it for the vine, the tree stump and the ocean floor.

Finally, its coronation time and the Prince rocking his fancy dead woman’s earring on his chest, gives a short speech before presenting Kuvira with the Kiyoshi Metal of Freedom, which should be a big fucking deal. But Prince Wu learned about Kuvira what we all learned about Stevie Wonder when he’s giving an acceptance speech at the Grammy’s. Once you give him the mic you might not get that muthafucka back. Kuvira gave that speech like…wait, is there even a real analogy for this? Is there another pop culture reference for someone getting up in front of all the world leaders and spitting the hook to FuckWithMeYouKnowIGotIt? How you gonna get up on this dude’s coronation and tell the rest of the world what happens when Benders invade the new “Earth Empire.”

Then on top of that, she go at Suyin’s neck too, threatening Zafou, issuing warnings like Suyin ain’t Sleepy Hollowed somebody before. Kuvira got some huge “insert your own sexual organ here cuz I don’t know what would make you less uncomfortable” reference.

I love Bolin, yo, but his naivety is killing me. KILLING ME. He gonna act like Kuvira’s tactics haven’t already cost him Kale dates on Air Temple Island. He acting like World War II never happened and shit. I mean, it didn’t in Avatar-verse but like, everybody knows about that shit. He goes at Mako for being the bodyguard to a flake like Mako doesn’t already hate his job. This ish is guaranteed to end in tears.

Toph the real MVP though because she sees bits of poison that been chillin’ in Korra’s bloodstream for over three years. That poison been there so long it’s got seniority, the weekends off and maxed out vacation time. Then Toph gives Korra that real smack URL talk: she’s probably been holding on to that poison because it gives her an excuse to not be the Avatar in the public world anymore. She’s still scared to get merked since she was RIGHT THERE on the mountain side once. Which brings up a few things:

First off, I ain’t mad at Korra for that. I’ve never had asthma before, but those that are afflicted always say that the really bad attacks feel like the end. Well Korra had that shit times 20 to the Zaheer power.

You ain’t supposed to come back from that Earth Queen treatment, my benders. This is basically Korra’s version of I, Survived.

And also, Gotdamn Toph, when are your office ours?! Why did she hit Korra with the Doctor Phil diagnosis dooooeeee. Seriously, if I need to work some things out, I might go holla at Dr. Beifong M.D.s. And yes, for the record, I’ve now given Toph two more jobs since this recap started.

With shit getting dire and and Kuvira out here creating Earth Bender Utopia, Tenzin does what he probably should’ve done ever since Tonraq greying ass got off the boat without his daughter: send some folks out to find Korra. He puts his best people on the job.

In case you weren’t sure, Meelo is STILL dat dude.

Yo, we don’t really know what the fuck is going on with the last scene, except when Tony Stark start talking about how much of a game changer his next piece of tech is, that shit rarely turns out well. For ANYBODY. Only thing I know for sure is that Poison Ivy would be PISSED.