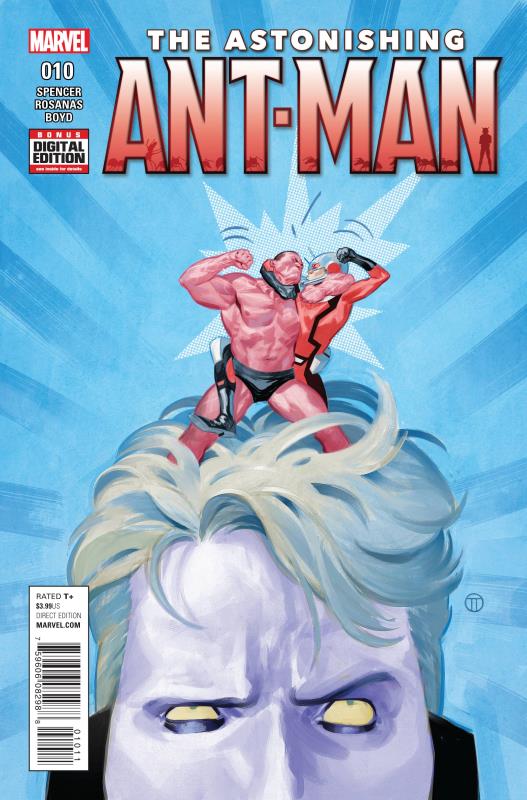 If you aren’t reading this book, fuck your life. That’s it. Straight up and down. I don’t even know how to start off reviews for Ant-Man anymore. I don’t even know how to prepare you for another good ass issue. Another story with character development. Another story with the shrink game gawd Scott Lang being the most underrated Everyman in the Marvel universe. Astonishing Ant-Man is a consistent hit. No weakness. Nick Spencer don’t do weakness. Roman Rosans don’t know no weaaaaakness. Astonishing Ant-Man don’t know a Bast damn thing ’bout weakness.

We finally see how Scott Lang lands back in jail and it’s on some fuck shit, man. We last left Scott breaking into the Cross’ compound in order to rescue his daughter while his Z-list criminals helped with the caper just to achieve their own ends for the heist. Scott was trapped by Cross (which is embarrassing as he was trying to rescue his daughter) and becomes the one who needs rescuing. The majority of this book focused on the criminals that composed of Scott’s team. Spencer shows how they were out for themselves, as well as how unselfish some could be no matter how hard they fight it.

You know a book is good when the supportive cast is getting that shine and you’re still salivating for what happens next. Ant-Man is a solo series but the cast is so well rounded by Spencer. Griz and Smith are fucking hilarious, the new Giant Man Raz Maholtra is a sweet heart and Cassie is on her revenge shit and trying to rescue her family. Spencer has Scott having to let go of trying to protect Cassie and actually let her take point this issue.

Rosanas on art man. Man this shit gorgeous. Fuck else you want me to say. Dude’s art is so good and consistent with it that it’s almost upsetting. I almost want him to give me something to complain about. Almost. Rosanas understands these characters and makes each pop in personality and look. Rosanas and Spencer make Astonishing Ant-Man a joy to sexperience their work together.

9.3 Uncredited Saves from Outta Nowhere out of 10