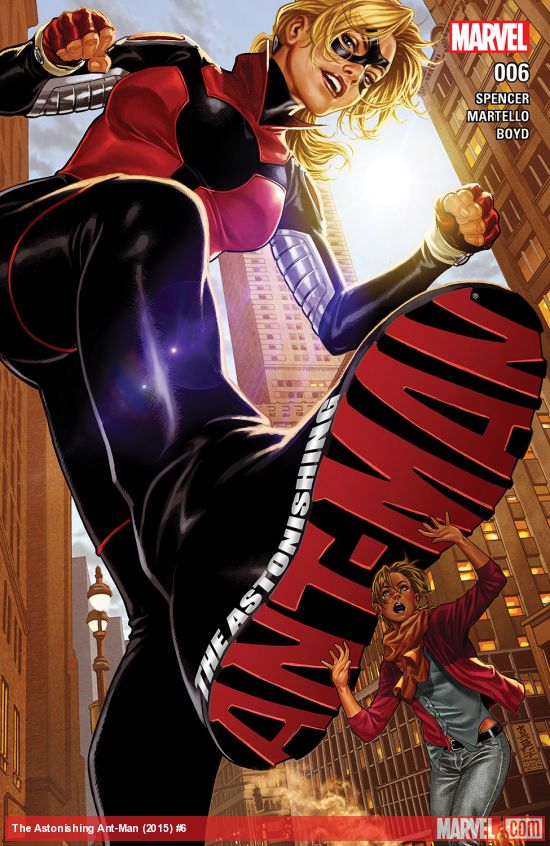 Nick Spencer. I said Nick Spencer on aye-thing. We get a Cassie Lang-focused issue, and you’d think that be a bit boring or act as a filler, but naaaah, sun. This gets into the thick of it. Spencer has an incredible knack for fitting a lot within one issue. The story moves so far while recapping and adding onto the arc that I kept saying, “Whoa, we not at the end yet? We still got some pages to go? Yes!” Spencer got Cassie Lang out here dealing with the fallout of finding out her father was following her around and spying on her; she doesn’t know why but Scott’s behavior has her uuuupset. It’s showing in school (our girl fighting), and even her mom has some understanding of what she is going through, but not a lot. What better time than for an unexpected cameo from best friend and god of the bow, Hawkeye a.k.a. Kate Bishop. 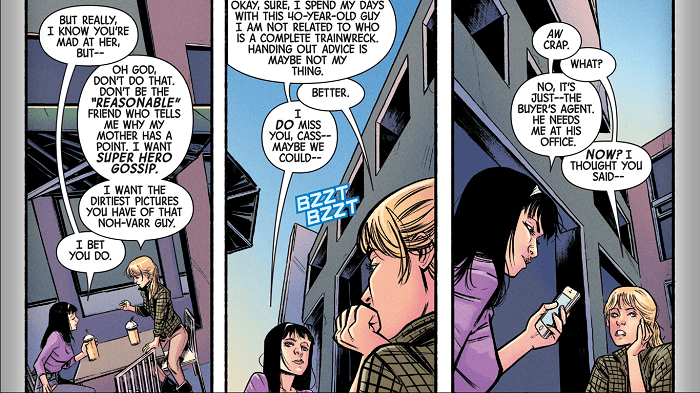 Kate provides the “normal life ain’t so bad” talk for Cassie that is much needed, but as we’ve seen, Cassie has plans of her own. She is going into Hench app HQ to get her powers back and shut them down. However things don’t go as planed as Power Broker is onto Cass and cuts a deal to ensure her services. Power Broker reveals what actually happened to Cassie, and not only is she pissed her heart got ran, she is upset her father, shrink game Scott Lang, didn’t tell her.

Spencer is having Cassie go from a hero to villain. Of course Cassie won’t see it that way, but when you’re in it for revenge that line between hero and villain starts to blur. Martello was a great guest artist for this issue being the realest in the pages, man. I can’t name a lackluster effort on Rosanas’s part since he’s been on the book and Martello holds the baton well on this cameo. His art is very technical on facial expressions and actions of the characters, especially when it comes to sarcasm and disappointment, which isn’t an easy task on page.

All respect to Martello for the guest sport on the inks but Rosanas and Spencer make this book, and I have said it before, but I think it still holds true: this book and this creative team are the ones that fill the gap left behind from Matt Fraction and David Aja’s run on Hawkeye.

Ant-man stay going hard even when Scott Lang isn’t the focus or makes an appearance in the book. That’s a true testament to craft and skill on both creators’ part. I feel like folk keep underestimating Ant-Man when they need to jump on. Listen yo, Ant-Man is the book you need in your collection. For really reals.