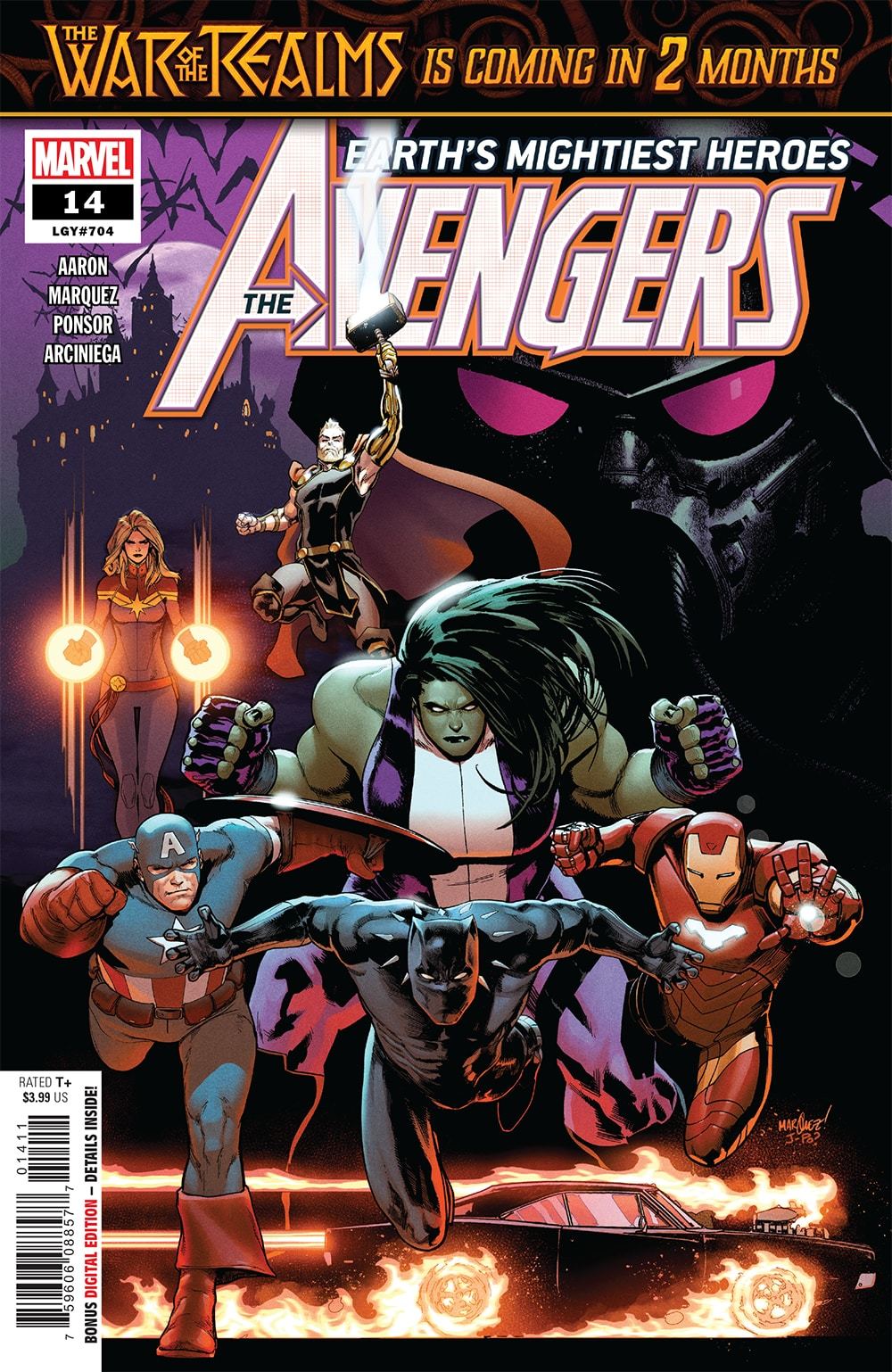 In Avengers #14, The newest iteration of Earth’s Mightiest Heroes deals with the fallout of a vampire civil war. The destruction of Castle Dracula has driven scores of the undead fleeing, causing chaos and bloodshed in their wake. We’ve, of course, met the new Avengers. We’ve also been introduced to the Defenders of the Deep and the Winter Guard of Russia. Now enter the Legion of the Unliving, led by the mysterious Shadow Colonel. They’re on the hunt for Dracula and are determined to take his seat as the head vampires in charge. In teams of two, our heroes deal with four separate vampire attacks around the world. They learn more about the leader of this vampire coup as the Shadow Colonel appears to turn himself in to the Avengers. The reason behind this peculiar act is partially revealed to be less than diplomatic (surprise?) 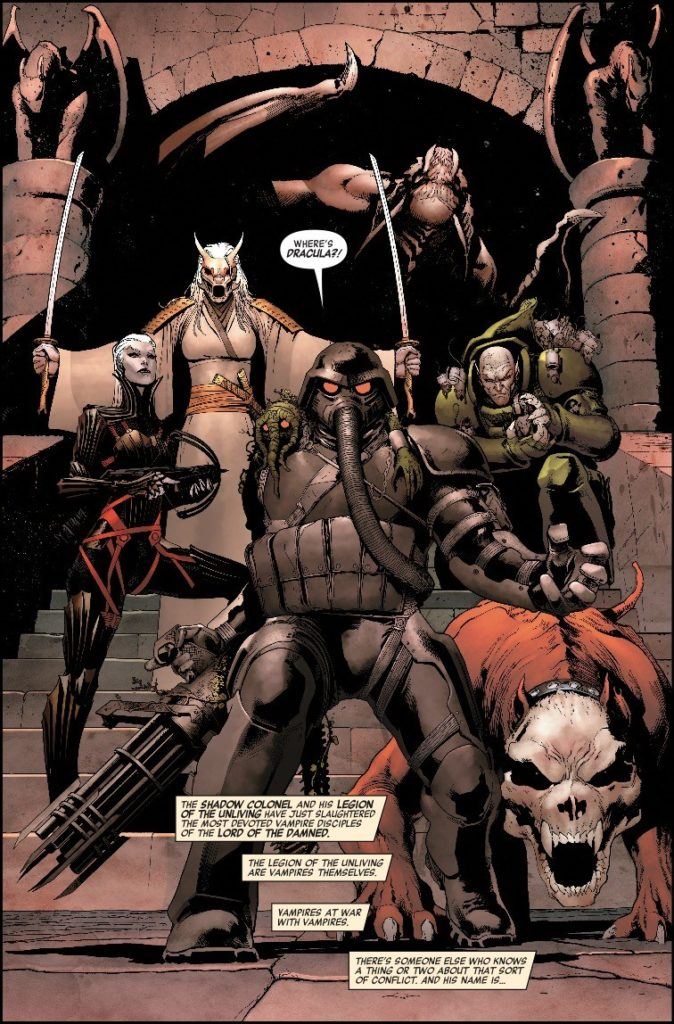 This comic has its crests and troughs with a surprising number of scenes. Captain America, Iron Man and Black Panther have the most interesting interactions. While Blade, Ghost Rider, She-Hulk, Thor, and Captain Marvel are all either occupied off-panel or smashing vampires without a second thought, Rogers, T’Challa, and Stark show a level of compassion. These three offer the vampires a chance to stand down, even offering them protection. Cooperation wouldn’t have made for an exciting panel, however, so the offer was refused and the smack down was laid. (Captain America armed with a cross and staring down a terrified vampire hoard gave me chills.) At one point, Iron Man and Black Panther blast their enemies with a Krillin-style Solar Flare. Together, they briefly address their respective thought processes about the ethics of killing these creatures (people?).

The end of the comic suggests a potentially interesting take on refugee status although we could easily get thrown into some supernatural chaos centered on Ghost Rider. (Maybe both, please?) 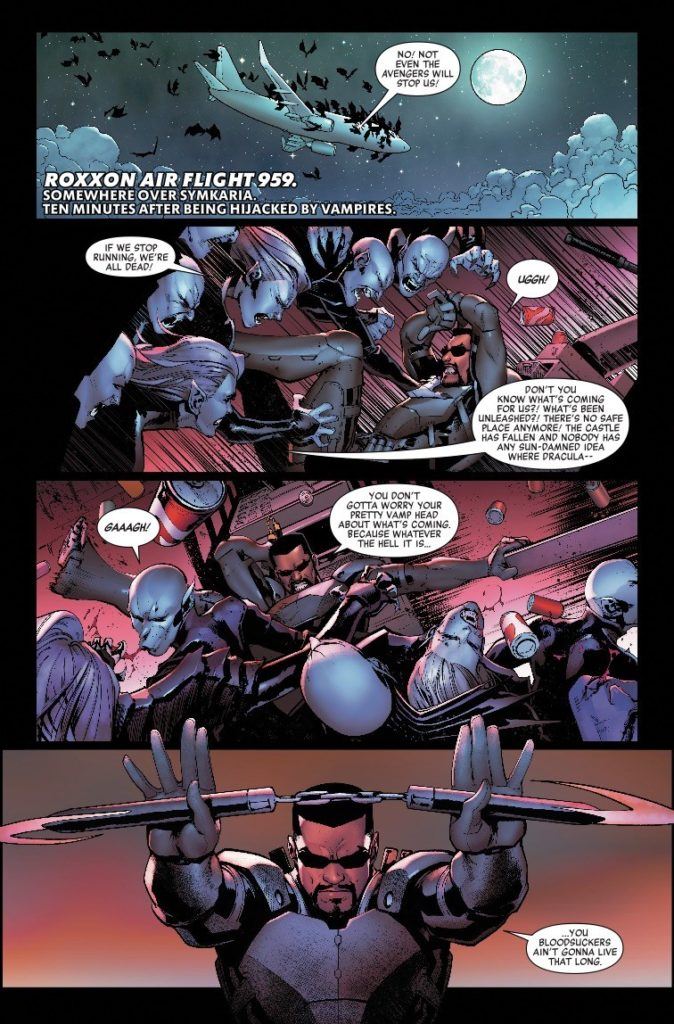 David Marquez is back on the book showcasing his artistic talents in a few exciting action shots and poses. Black Panther and Iron Man’s double solar attack offered a dazzling scene that offset the darker aesthetic of most of the book. A fiery scene featuring Ghost Rider also served as a highlight, albeit a terrifying one. The newest Avengers book continues to be solid and dynamic take on Marvel’s flagship team.