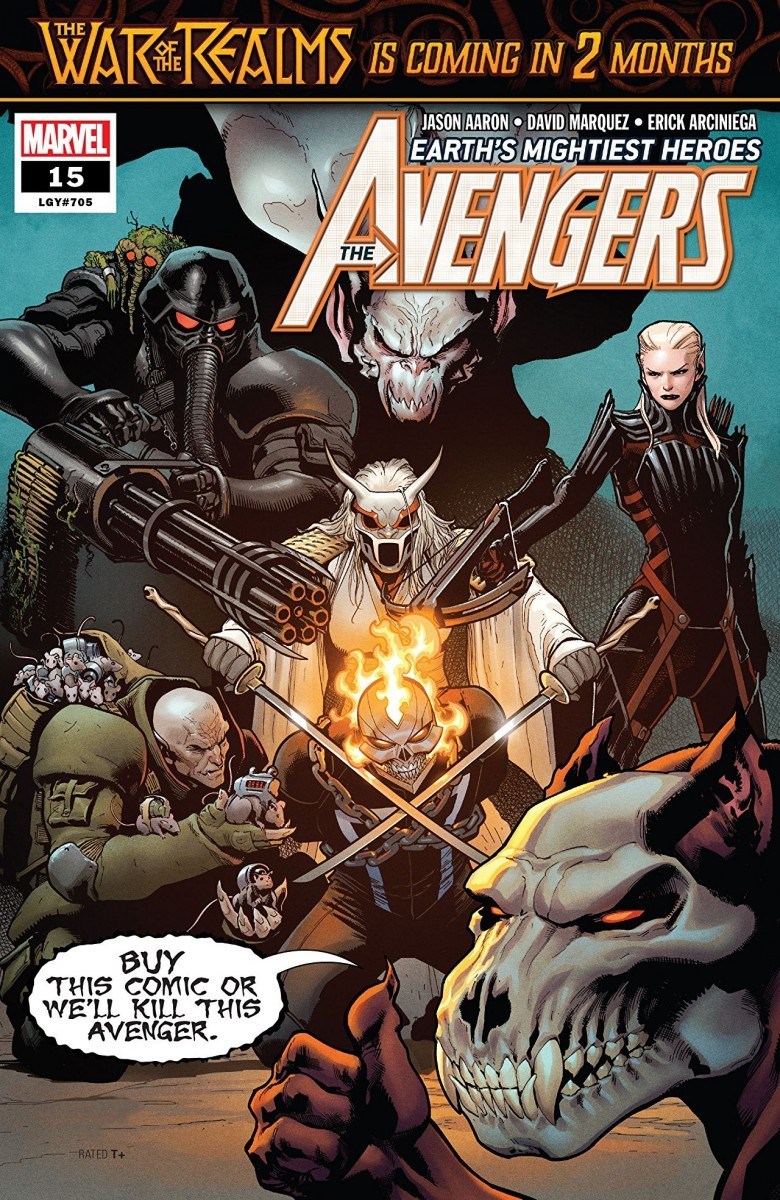 I had a few thoughts while reading Avengers #15, this week. The most important one was definitely, “Holy . . . did that vampire really just let off an Optic Blast?!” A close second was “Did he just say ‘Boy-Thing’?”. Aaron and Marquez continue ‘The Battle for the Throne of the Damned’, a vampiric civil war between O.G. Dracula and the newer Shadow Colonel’s Legion of the Undead.

The Shadow Colonel and his surprisingly articulate dog, Sarge, manage to induce and control a berserker Ghost Rider out of Robbie. Escaping Avengers Mountain, they proceed to use him to further their crusade to control the vampiric world. Oh, and they predictably want to establish vampires as the ruling class on the Earth (you know, classic stuff). Iron Man, meanwhile, slips past the Winter Guard to offer Dracula asylum with the Avengers. The voluntarily imprisoned vampire refuses Tony’s proposal, but not before screwing with Tony’s head by telling stories of Howard Stark (never fails). We end with the rest of the Avengers catching up to the Legion and Ghost Rider, in the midst of a horrific attack. They will undoubtedly discuss terms of peaceful surrender over mead, synthetic blood, and cigars.

This issue was connective tissue for the arc, formally introducing the Legion of the Undead when Shadow Colonel gives a brainwashed Ghost Rider an orientation. I’ll give props to the creativity of the Colonel having a “Boy-Thing” he grew from a piece of the Man-Thing in order to have an endless supply of wooden stakes. The only important mystery left is Dracula’s plan after voluntarily surrendering himself into Russian custody. That part of the book was pretty dialogue-heavy and personally, I’m tired of anything regarding Iron Man’s family. If you really want to impress me, regale me with stories of Sarge and his healthy, supportive Hellhound parents.

This book does a lot at the same time, but most of it works. Ghost Rider’s inner monologue plays the “I’m a monster” trope. There’s the dangerous, voluntarily imprisoned character (always a treat). Then amid the civil war as a main thrust, we’re guaranteed a team-on-team fight between the Avengers and the Legion. David Marquez continues to dazzle me with his art, but let’s shout out colorist Erik Arciniega. The book bounces back and forth between fiery reds and a cool, blue hue. This is perfectly captured in a back-to-back shot of Iron Man wearing a blue costume firing blue blasts with Crimson Dynamo, mirroring his pose while wearing the colors of his namesake. This book continues to be as solid as Marvel’s flagship team should be.