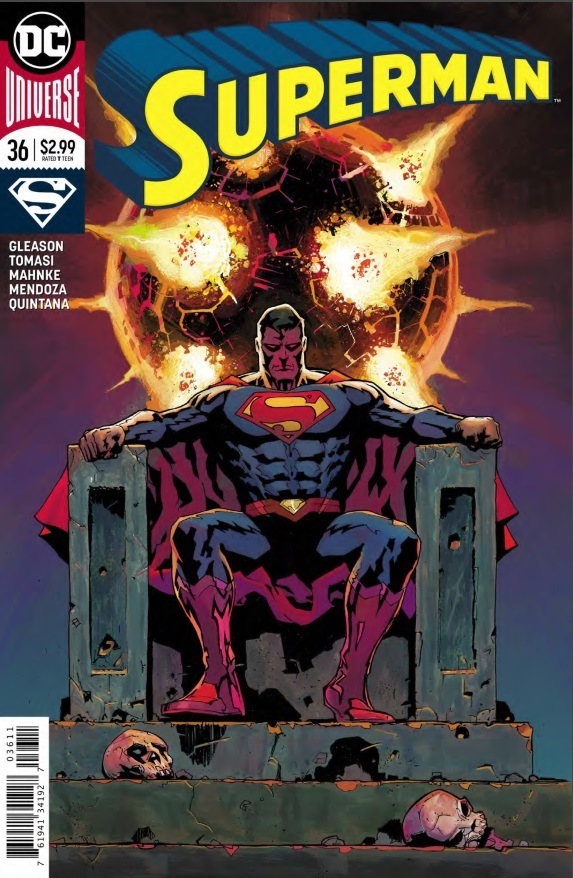 Since 1986, there have been nearly 40 games on major operating systems and consoles that have featured Batman predominantly, if not in name than in spirit. Whether it was the original isometric Batman game for the proto-consoles to the recent Gotham Knights (where yes, Batman dies, but arguably that doesn’t detract from how central the character is to the plot and the overall aesthetic of the game), the biggest interval between Batman game releases have never exceeded more than 3 years at most in recent years, with the current 4 year gap between Batman: The Enemy Within (2018) and Gotham Knights (2022) being the longest in the IP’s history.

Conversely though, Superman (aka the Man of Tomorrow), arguably an equally iconic character with just as much source material to draw from, has not had such luxury. The first Superman game came out in 1976 on the Atari followed by a 6 year gap before the next game on the Commodore 64, a slew of games in the early 90s that culminated in Superman: The New Adventures in 1999 largely heralded as one of the worst games ever created, and then a scattering of games in the early 2000s. In fact, the last specifically Superman games consisted of one educational game in 2005, a loosely based movie pairing in 2006, and a handheld TV game (also in 2006). Superman has shown up in other DC ensemble games such as DC Universe Online, the Lego Batmans, Injustice, and Multiversus, but has never been graced with his own current generation game since the forlong days of the Nintendo DS, Playsation 2, and XBox 360. In fact, the last well documented attempt to make a Superman game occurred way back in 2008 that ended up getting canceled due to the economy crashing. In 2021, we were given some anecdotal insight into what the game would have been like thanks to the designer.

Back in 2020, there were rumors that Rocksteady was developing a Superman game that was canceled just as quickly and there were only whispers of its existence with no real tangible information here or there outside of the rumors and shareholder reports. That hasn’t stopped the occasional fan mod from catching massive attention as there Unreal 5 demo reel that captured my eyes earlier this year.

Clearly the technology is there to capture the gargantuan scope of Superman’s man, as we have seen several other prominent characters across franchises get a chance to shine in the spotlight. But flight mechanics, the feeling of super strength, and a vast of array of superpowers a game does not make. I’m sure there is a significant part of the readership thinking to themselves, “well of course it’s difficult to make a video game surrounding a nigh-invulnerable, near omnipotent being with an outstanding moral compass and realistically only one or two weaknesses.”

In the last handful of games that Supes has been featured in, one he is a mentor NPC, one is a Lego game where the power and rules of brick building override everything, one is a non-canonical IP crossover fighter, and the most prominent is a dark-gritty interpretation of the DC universe that required all non-superpowered characters to take a special drug to not immediately die from the confrontation and also had Superman break bad.

I’m not going to argue that it’s easy to design around Superman, but as I continue to grow, there is something about the illegal immigrant journalist working on multiple fronts to make the world a better place that speaks to me. I think there are different vectors that could be taken to give Superman a proper game experience that can become synonymous with the character instead of the shambles of the N64 game.

As such, I have prepared three different treatments of pipe dreams of games that diverge from the familiar action-rpg in an open world that we have seen popularized over the years. While it is very much a formula that could work, I think there are other avenues that would better emphasize the interesting parts of the character and mythos.

One of the main reasons I’ve been thinking about a game centered on a god-like character is largely because there was a recent release that featured an actual god character. With God of War: Ragnarok out in the world to rave reviews, I think it’s safe to say that gamers are more than willing to embrace a father-son action adventure game where the duo go up against a world ending scenario. Kratos and Aterus laid out the formula, and I think Clark and Johnathan Kent could carry the tradition forward.

Whether you have a father and son cleaning up Metropolis, or going on an epic space crawl fighting empowered entity across the cosmos, there is a plethora of opportunities for Superman and Superboy to get into shenanigans that would properly showcase their prowess and put them through the paces. Action-RPG is very much the genre that Superman naturally fits into, but by anchoring Superman in a much grander setting that Metropolis allows him to “truly let loose.”

And maybe as a treat, we do get a final showcase of Superman and Darksied to create the world of cardboard speech, but you could just as easily take the fight to Apokolips or War World, Brainiac in space stations, Bizzaro, Mongol, Starro. Hell, throw Lobo in there like a recurring boss across systems like Gilgamesh in the Final Fantasy V. The point stands if you can have an entire franchise devoted to a god-like entity journeying through mythological worlds while exploring his humanity, surely you can adapt to at least one game with a similar premise.

Metal Gear Solid, but the Legion of Superheroes

Keeping to the space theming for just a pitch longer, this one is probably a stretch, but the Legion of Superheroes Saturday morning cartoon strikes me as a solid foundation for a game. Young Superman gets pulled into the future to help corral the future Legion of Superheroes in the 31st century. But I’m going to take it a step further and bring it a criminally underused mechanic in the form of Metal Gear Solid’s base building operation.

Imagine, recruiting different heroes to the Watchtower, building a crew of heroes, and trying to set up the Legion for success as you invest in different research and cultivating a kinship among your crew. It feeds more into Superman, the tactician and the scholar, while also still providing ample opportunity for field research.

I know Telltale isn’t around anymore, but I really wish they were because after the duology of Batman games, I truly do think that team could make a phenomenal Superman game. The Telltale Batman did such an excellent job exploring the duality of Bruce Wayne and Batman and placed the emphasis on the detective work and moral quandaries of vigilante work. That same framework would be absolute perfect for Clark Kent and Superman, with a healthy helping of Lois Lane.

Imagine, a five-episode run looking into the political policies of President Lex Luthor alongside his criminal enterprise. Imagine, looking at the issues of immigrants and refugees through the lens of one of the most iconic fictional immigrants/refugees. A dual story where you as Clark work with Lois in plain clothes on the ground seeking answers and occasionally dawning the blue fit to tackle more meteoric problems.

It becomes a game not about fighting things directly, but about how you want to tackle issues, the questions you want to ask to find the truth, and much like the Bruce/Bats dichotomy explored originally, lets you find the lines with Clark/Supes.

I’m just a fan spitballing, but I do hope that some company out there is thinking how to properly represent one of the most iconic characters in fictional in video game, because it’s long overdue and I know we can do it. I know it’ll be a struggle, but I’ll wait patiently till tomorrow.