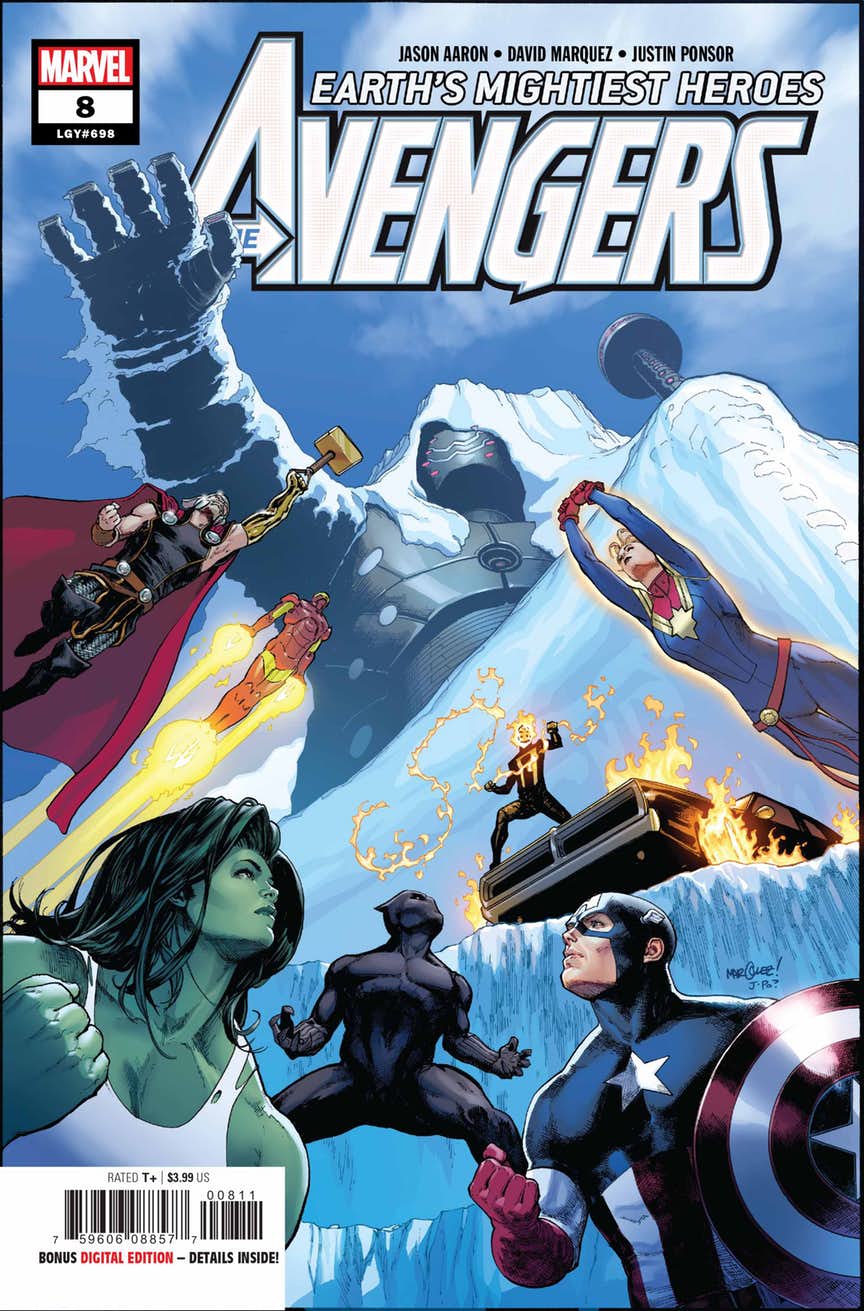 Avengers #8 is the much needed connective tissue between a first arc of a team book and the second. It isn’t always sexy and exciting but it is necessary and a talented creative team can make it interesting. Jason Aaron and David Marquez incredibly captured that art. Between the art, dialogue and creative choices I have high hopes for this book going forward.

We start off with Ghost Rider coming to the new Avengers’ base, the memorialized corpse of the first Celestial to come to Earth. After Robbie gets some tough initiation into the Avengers by Captain America we’re brought to the direct aftermath of their big battle. Before disappearing, Loki takes credit for bringing the Avengers together again (douche). Doctor Strange is examining She-Hulk and her newfound level of Hulkness and Thor needs to go to the bathroom. Black Panther has a couple discussions about their newfound situation with Iron Man and Strange. One of those discussions is a little more serious (I’ll let you guess). Tony and Danvers have their official post-Civil War II talk and the Avengers decide on who the leader is going to be (hint . . . it’s not Captain America or Iron Man). Briefly into the first official team meeting the alarm is raised and we’re off to the next adventure. 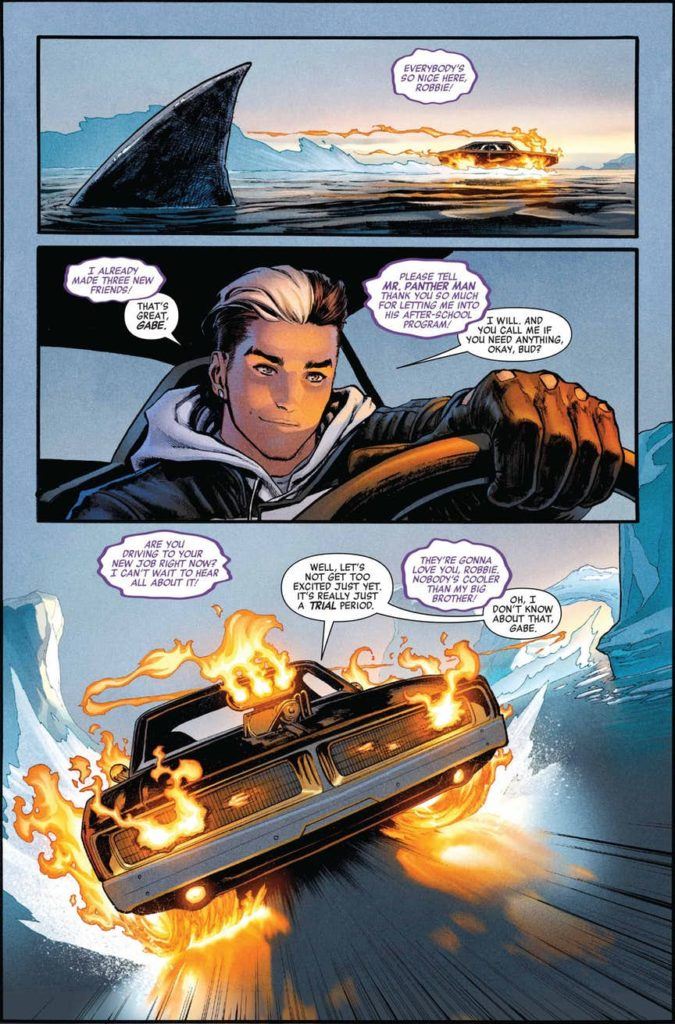 The beauty in this book is how much is able to be told in twenty-something pages. My recap even left out quite a few developments and the book still felt concise and directional. The use of characters bring a very good balance of light hearted quips and serious dialogue. With Black Panther on the serious end and Tony Stark on the opposite the book doesn’t feel overly quippy (although it was quite quippy) or suffocatingly humorless. Arguably most exciting is the set up for the next antagonist. Where Loki is essentially a mustache twirling classic bad guy in this book, our next “villain” promises to be morally complex. He was an X-Man for goodness sake! The confrontation will be difficult to navigate and likely delightful to watch unfold. 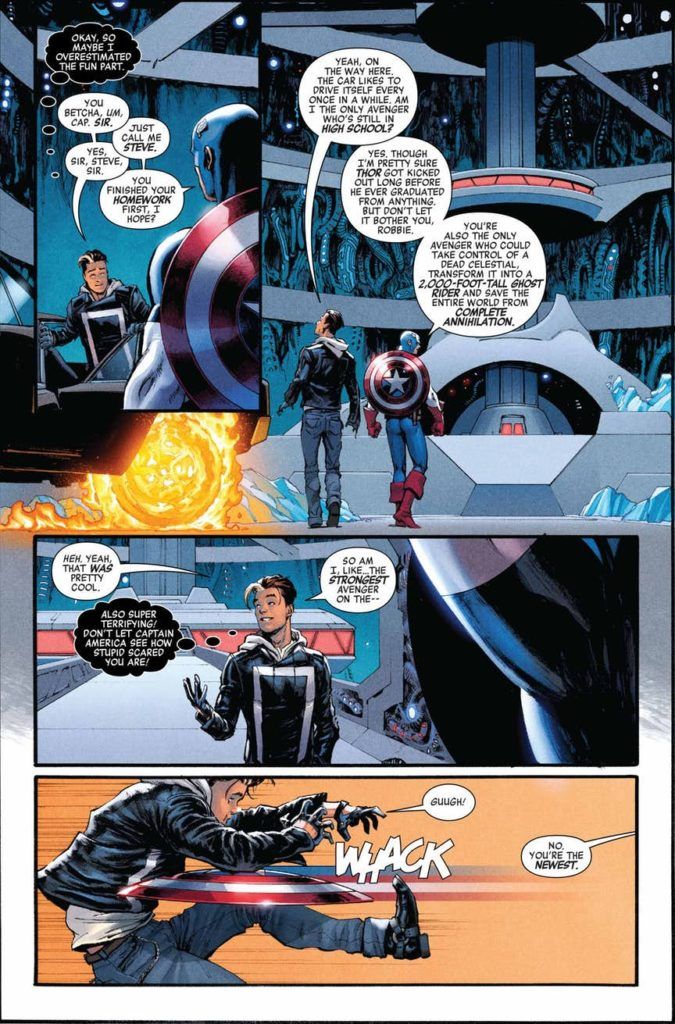 Props to David Marquez. It couldn’t have been easy to follow the dynamically colorful, cosmic explosion that Ed McGuinness brought with the Avengers’ debut. Instead of trying to imitate his style, Marquez choses a more muted color palette without losing excitement and detail. I especially like a scene between Captain Marvel and Iron Man with a very prominent duo of whales (humpback? blue?) behind the glass. I’m feeling the hell out of this creative team.