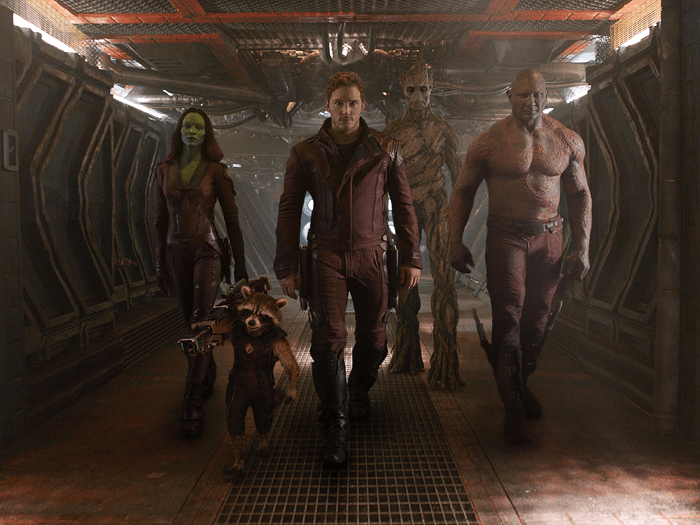 Chace on the track:

There’s something about a really good trailer. Whether you are already anticipating a movie for a long time & it finally gives you that first peek, or had no iota of knowledge concerning the flick but it drew you in scene by abbreviated scene in its modest 2 minutes- a trailer can go a LONG way in priming the masses to putting their cash behind your feature. Enter Guardians Of The Galaxy. Full disclosure: had very little previous info or interest in the title comic-wise even though it was Marvel & I’m fiercely loyal to the #squad. But as I’m settling into my super-comfy Laz-Y-Boy seat at the local AMC for the excellence that was to be Captain America: The Winter Soldier, squad drops this teaser that in a little over 2 minutes presented a cast that intrigued, scenes that had me legit LOL’ing, & a song choice that sealed the deal. Needless to say- release date was plugged into Google calendar & plans were made.

Fast forward to August 2nd 2014, me & fellow BNP rogue Whitney Syphax-Walker are absorbing all this action-laced hilarity & nodding in agreement that, once again, Team Marvel got it right. First off, a little background: Guardians (movie) is centered around a rag-tag crew of loner mercs who through serendipity find each other, decide “Hey man it’s pretty awesome of have like-minded bad-asses to troll the galaxy with, let’s do this all the time eh”, & ultimately tow the anti-hero line between noble heroism & the beginning of Pac’s “Hit Em Up” verse. The film storyline deviates a bit form the comic but didn’t burn my britches at all because, hell, I hardly knew thee before this. Okay…back to the movie…

The movie wastes little time jumping into action & antics, but do a great job of using the pre-title scene to quickly establish a morsel of Peter Quill’s (Chris Pratt) backstory & motive with the death of his mother & subsequent abduction. From there it’s pretty much warp speed into a bob-&-weave of pretty impressive fight scenes & smarmy dialogue between characters that would make Tony Stark himself proud. CGI meshes well with reality, making for outstanding visuals that help carry the story awesomely. There is a really cool sequence where Quill, Gamora, Racoon & Groot all meet for the 1st time on Xandar as their personal motives collide that makes for a exceptionally well-executed “How I Met Your Intergalactic Super Crew” origin story. And another during their prison break from Kyln (where they meet Drax) that doubles as a cool vehicle to quickly introduce the characters to each other & a quick glimpse of how formidable & resourceful each of them are. And trust, that is necessary, ‘cuz considering the looks you get at the antagonist & what he’s capable of, there is certainly some qualifying for how they can lay them proverbial “paws.” 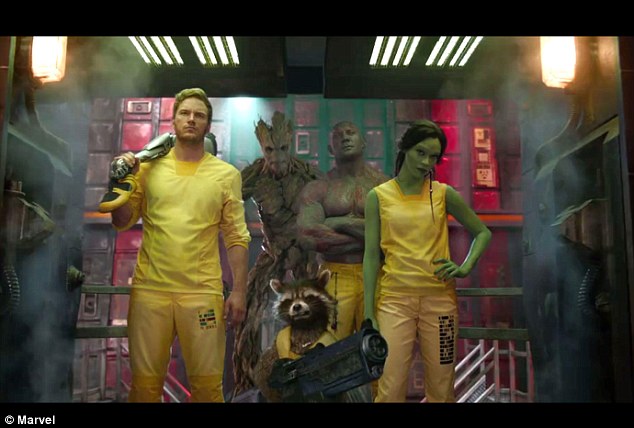 The casting was pretty spot on. Chris Pratt, usually the bumbling oaf in…well….ERRTHANG, shows some chops as the lead protagonist, hopping from his comfort zone of likeable asshole over to pretty convincing come-at-me-bro hero smoothly. Considering all the experience Zoe Saldana’s clocked as essentially Hollywood’s go-to “ethnic alien female lead” she no doubt holds serve & delivers as Gamora. Vin Diesel didn’t exactly have to reach deep into the toolbox to voice Groot (he only has 3…4 words total the entire film, just repeated) but he drops pretty much the bar of the whole movie, & Bradley Cooper may have helped cement Rocket Raccoon as Top 5 character of 2014 with how money they laid that down. My one worry/biggest surprise was definitely Bautista as Drax. Bautista is off WWE lore & I’ve seen him hulk his way through a couple previous flicks with a sour cringe, but it’s that very same over-the-top character they play up in GOTG that, along with dope writing & great timing, turns his presence even between action sequences into truly enjoyable.

With all the thumbs-ups for the out-of-nowhere Marvel gem, by far the most outstanding would have to be the soundtrack. Look…bottom line: Quill’s “Awesome Mix Vol. 1-2” gots’da jams, breh. Like it could very well go down as one of those cult things that lingers on long after the movie.

“Hooked On A Feeling”, “Come And Get Your Love”, “Cherry Bomb” all before opening his later mother’s gift to him at the end of the movie revealing “Awesome Mix Vol. 2” which dips into Motown ether like “Ain’t No Mountain” & “I Want You Back” from the Jackson 5. C’MON SEN! The music pulls this Prof X psychological association voodoo on you & further drills into the brain that feeling we all get when we find out someone we just met has an amazing taste in music. You feel really good about allowing Guardians to be your friend. Add in the absurd amount of Easter eggs lurking throughout for the deep fandom (they laced a young lord with a Howard The Duck cameo like…whet?) & the staggering potential for Marvel Universe film expansion due to the film’s success, & its really hard not to give a slight hat tip to GOTG & be excited for what’s to come. And never forget:

Whitney on the track:

Words, B. The man above said a lot of them, and since (for the most part) I stand in agreement with him, I won’t recap. Still…Chace is an Aquarius, so seeing the beauty in things comes naturally to him. Me? I’m a Scorpio. I’m here to point out a few things that the soundtrack couldn’t make up for.

Huge disappointment here, sorry. Pace’s Ronan was without question not only more impressive visually (and sonically), he was leaps and bounds more bad-ass than Josh Brolin’s Mad Titan. He was not intimidating, and I found myself pretty frowned up at just how “meh” I felt about finally seeing him on the big screen.

With that out of the way, someone should call Karen Gillian and congratulate her for making Nebula sniveling, twitchy, and altogether uninteresting. At no point was this character shown to be qualified to do much besides follow orders and sulk, which was terribly irksome considering how capable (and brutal) she is in the comics. The difference between canon Nebula and screen Nebula was too great, and I frequently found myself wishing an unknown actress had taken the role so I wasn’t directing this shade towards my beloved Amy Pond.

Drax
Stop throwing things and just hear me out. Drax The Destroyer was literally created by Kronos to kill Thanos. THANOS. Not Josh Brolin Thanos, but I’mma-kill-my-own-people-because-I-wanna-make-Death-my-Boo Thanos. So watching him getting his ass summarily whipped by Ronan? Bruh. [Speaking of Ronan, how did he find out that Gamora was planning on betraying him? Was that discussed or nah? Did I miss that exposition? Ugh. Plot holes make me angry.]

Nova Corps
So clearly Ronan has beef with the Xandarians, but when we’re actually shown the people of Xandar it seems pretty baseless. That’s because for some reason the powers that be decided to change the Nova Corps into pretty people with cool ships instead of pretty people with POWERS. Nova Force, specifically. Like, they have superhuman strength and speed and electromagnetic blasters. I’m not trying to compare the movie to the comic too much, but I don’t get this decision at all.

Yondu
Look, Michael Rooker played the holy heck out of the role he was given, but that wasn’t Yondu. Again, maybe I’m being persnickety, but come on. If you’re going to change a character that much, just create a new one and help me not suck my teeth so much during movie dates.

Also bearing mention is that I’m pretty sure the first time we see Black extras is in the prison scene. I’ve only seen the movie twice so I could be tripping, but if I’m right? That’s foul and needs to be pointed out.

Now, did any of these things make me love this movie any less? Nah. All in all it’s still a fantastically delicious flick that I enjoyed just as much the second time as I did the first. And ending the movie with not one, but TWO Motown songs? That made me chair boogie enough to forget even the most glaring misstep.

They need to head back to the drawing board for that one.