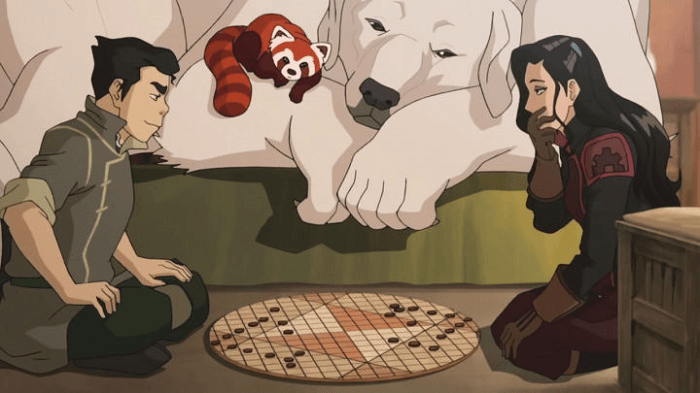 Team Avatar gassed up the jeep, gassed up the polar bear dog and took the fight to the streets like R. Kelly when thugs became popular in the early 2000s. They track Aiwei to a town with the same shady tavern Afro Samurai beat a dude down in over a glass of lemonade. Bolin thinks the poster on the wall is because these cats bootlegged his mover, but actually they’re wanted posters from the Earth Kingdom. Can we talk about the subzero fucks that Korra is giving in her wanted poster doooeee? She look like she did a bid already and can’t wait to go back. She look like she used to be up in Pelican Bay controlling the cigarrette trade. Anytime a dispute went down, she was on some, “Oh your shipment (sparks some flames in her hand), I must have smoked those already.” I want this shit on a T-shirt fam. I want this shit as the album cover on my mixtape when it drops on In The Yard Records. Sheeeyet, y’all don’t know my life. Cats start sizing them up and because Team Avatar can’t fight EVERYBODY, they back out, but not before Korra backs up that hard ass looking wanted poster with this exit:

Had to add that move to the repertoire fam, I ain’t gonna lie. Hit my daughter with that same shit when she asked for more milk past her bedtime.

Back in Zaofu, Lin approaches Su because her soaps BEEN over and that means that Team Avatar is running late. So then Su hit her with the most nonchalant betrayal ever: “Now don’t get mad, Korra is fine, I’m just waiting for hear if she tracked down Aiwei yet.” WTF. She said that shit like she just ordered a double latte at Starbucks. Yo, Suyin can’t be trusted. And I know that’s not a new sentiment for many of you, but she said that shit like a sociopath, like she didn’t just knowingly deceive Lin the night before. Remember that shit in Silence of the Lambs, where they talked about how Hannibal Lector killed a man and then ate his liver, but his blood pressure never rose above 80 when he did it. Shit. You sure that’s Kale these bastards are eating in the Earth Kingdom?

Back to the hunt, Korra is running Naga into the ground as they track Aiwei. They find the jeep, but since Korra is terrible to her pets and most people, Naga does what Lin been wanting to do to Korra for a grip.

Mako and Bolin decide they are going to go into town and see if they can find Aiwei quietly, which apparently means they go undercover as Walter White and Jesse Pinkman, trying to push that Lava Crytal to the people. Eventually, Mako and Bolin find Aiwei hiding in the city while Korra and Asami find a map to the meeting, but can’t place the location. And also because Korra hasn’t realized yet that the spirits only get up in her personal space when they’re trying to tell her something. They all go to the town and try to check into a room for the stakeout, but a couple of people that Bolin originally thought were bounty hunters are actually Bolin Beliebers. They run up on him for autographs and shit while the rest of Team Avatar in the back like

Things get pretty boring during the stakeout (for everyone involved, including the viewer), so Bolin finds a game of Pai Showdown in the dresser drawer because the owner is a heathen and didn’t order any Gideon Bibles. Asami challenges Bolin to a game of Pai Show, but Bolin doesn’t think it will be a fair fight because he learned the game from Shady Shin. Then Asami the fictional bae drop what is probably the sexiest thing that could be said on a TV-Y7 animated show, “I learned to play from my dad, the diabolical genius. I’ll destroy you (implied hair flip).”

BOLIN! You better take that weak shit somewhere. In the middle of their best 50 out of 99 match where Bolin has yet to win, Korra gets impatient (surprise) and decides to confront Aiwei in his room. But they discover that Aiwei has entered the spirit world for the meet. She sits down across from him to enter the spirit world too, but their physical bodies are the most awkward face off since Cyborg and Cyborg had a hackers battle in Injustice.

In the Spirit World, Korra spies on the Zaheer and Aiwei conversation as Zaheer tells Aiwei, “You’re a liability and you exposed us. Now I have to get rid of you, tell me if I’m lyin Truth Serum.” Zaheer sees Korra, teleports him and Aiwei to the cliff edge AND THEN TOSSES HIS SHADY ASS INTO THE FOG OF LOST SOULS.

Bruh, I know things didn’t work out and all, but gotdamn, you just gonna John Cena a brotha off to purgatory like that? Zaheer beams back and has a chat with Korra, giving us the non-fight the streets been thristing for.

We did get some answers, not the ones we deserved, but the ones we needed. So this crew is the Red Lotus and they are really just misunderstood. All they really want to do is kidnap the Avatar, brainwash her and throw the world into chaos. You know, basically the Joker of Avatar universe. Lets hope this doesn’t end with Zaheer standing over Kai with a crowbar. But let me tell you how much more dope, how fucking reign supreme Zaheer is than everybody else: This muthafucka can communicate to the outside world while in the spirit world. The fuck?

Bruh, this shit was UGLY. Lets not forget just how good Mako and Bolin are and they got taken apart. If your barber pushed you back like this, you would storm out of his shop, burn that joint to the ground and then cut yourself bald anyway. Things are as bad as they’ve ever been. And we’re thinking, well, that sucks that our boys got captured by the Angels of Death, but at least Korra and Asami got away right?

If there’s any consolation, at least it’s the Earth Kingdom that captured them and not the AOD, but still, they didn’t have to put my girl in the Hannibal summer attire like that either. Asami and Korra are chained up in the dungeon and thank white baby circumcised Jesus this is a kid’s show, because you know what kind of horror movie THAT setup usually becomes for more mature audiences. At any rate, Zaheer and the heartbreakers are headed for the Earth Kingdom with the bending bros in what can only be an epic battle once they get there.