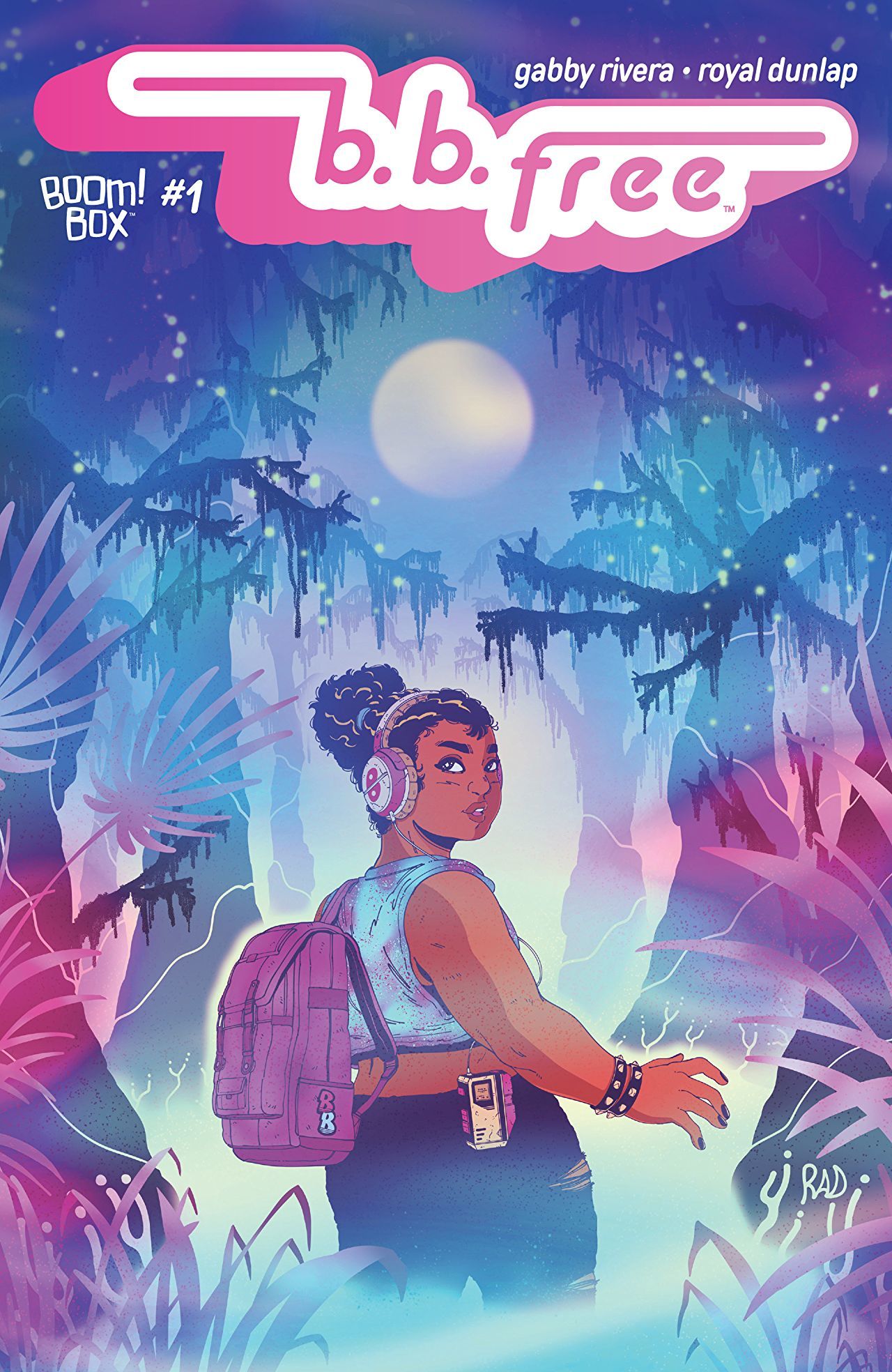 b.b.free #1 was released a month ago by BOOM! BOX the imprint of Boom! Studios that has given us such fan favorites such as Giant Days, Goldie Vance and Lumberjanes. It is the second comic series being helmed by writer Gabby Rivera (America Chavez‘s solo series from Marvel) and debuting artist Royal Dunlap whom I came to know from Twitter from such hashtags like #DrawingWhileBlack. Opening the first five pages reveals that It’s been over a hundred years since the Plague That Ate Greed wiped out half the population, and it’s the only world that b.b. and those her age have ever known.

Rivera has penned a narrative of one b.b., the protagonist of this comic who is finally almost fifteen. She’s bright-eyed and has big ideas on what she wants to accomplish and where her path in life may take her. She lives with her papa in a shared type of community set up in the swamplands and quietly abides by the image he has of her: obedient, on time and quiet with approved clothing. What’s interesting is when she’s not this perfect daughter, this “good girl,” she’s comfortable in her favorite clothing, loud as she wants to be and secretly broadcasts her underground radio show. In the fractured states of America, turning fifteen seems to be akin to doing a walkabout while b.b. wants the freedom and thus, agency to do so–it sounds like her papa is on the furthest side of the spectrum. 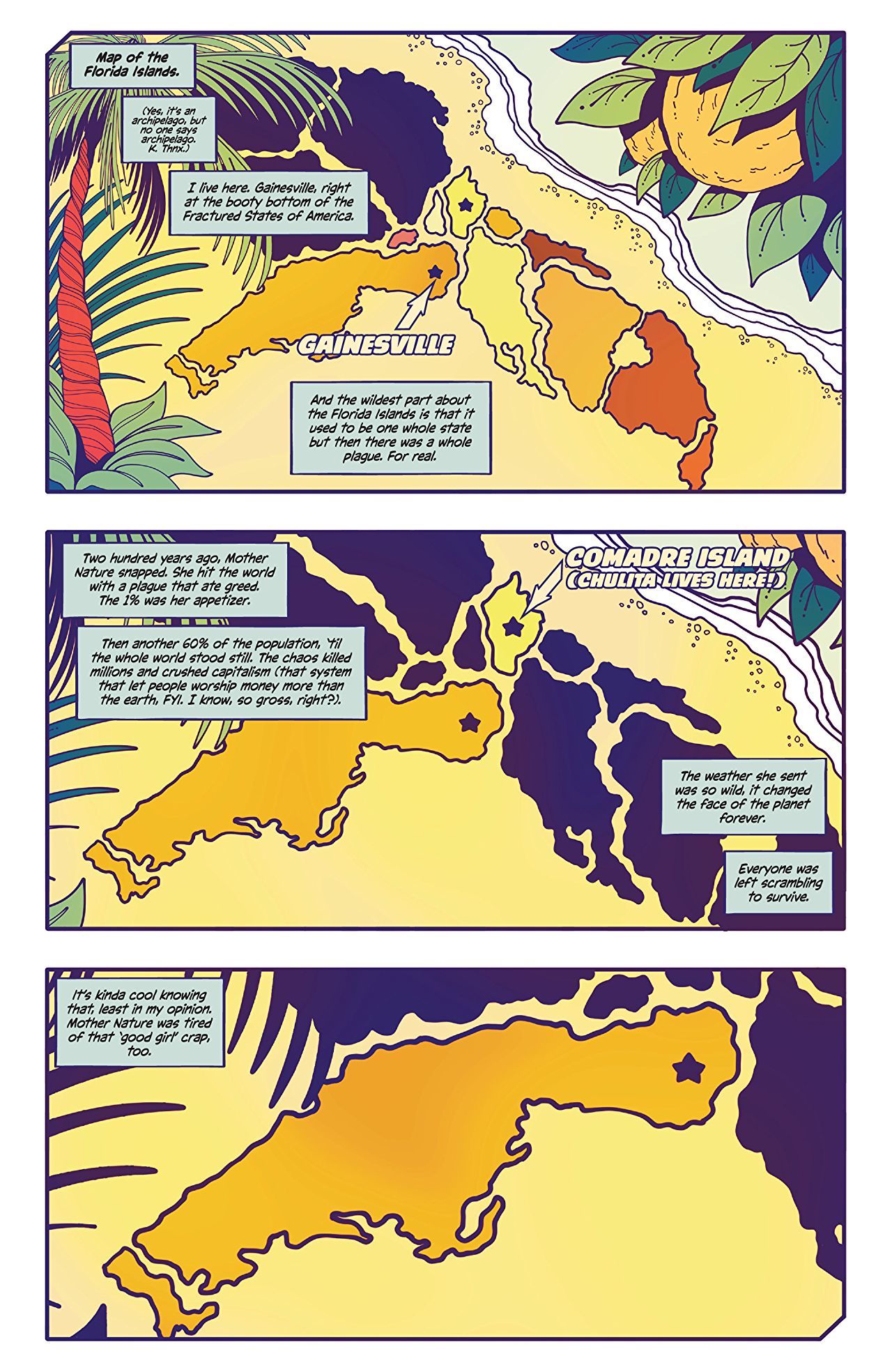 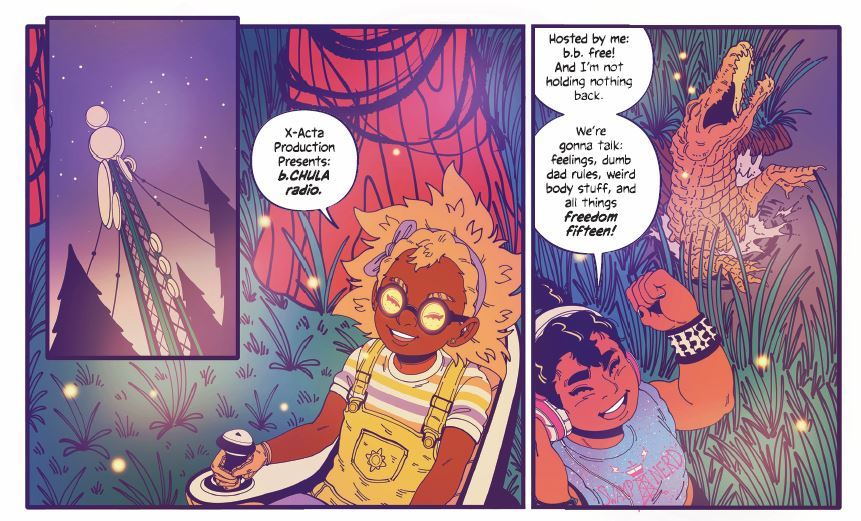 Dunlaps’s art is–can I add a chef’s kiss gif here? That’s what it is. Their artwork easily handles a variety of different people throughout b.b.’s community: young, old and of various shapes and sizes. There is no wondering if someone is a person of color through the many hues we see. The swampland itself is a sleepy place yet full of activity, and the coloring reflects the warmth of home. Each page brings something new and this art style is perfect for this story. There’s a special emphasis to the lighting and coloring about radio-related tech and of course, b.b. which adds to the cliff-hanger of the ending of this first issue. I really cannot stress how much I love the artwork from the small effects like starry eyes to the unique paneling done for pages where two friends team-up. There’s enough balance of light and dark, attention to shadows and appropriate facial expressions that make me want to dive in for more.

First issues for comics are hard to nail down perfectly and b.b.free #1 doesn’t completely clear the landing, yet it still holds some promise. The narrative is a bit clunky. The writing has thrown in a lot to take in for a first issue.

What has been established for sure that I love? b.b. is a visually brown Latinx teenager who is about to head on an adventure of a lifetime, and in comics–Latinx kids, especially aren’t always centered. This issue only hints at one of her squad–a crew of Black and Brown young adults to accompany her, there’s Spanish and created slang sprinkled through. The art is so great and falls in my list of top ten faves of published art in comics this year.

b.b.free will be loved by girls, especially preteen girls of color who want to see more of themselves in mainstream comics outside of the superhero genre.