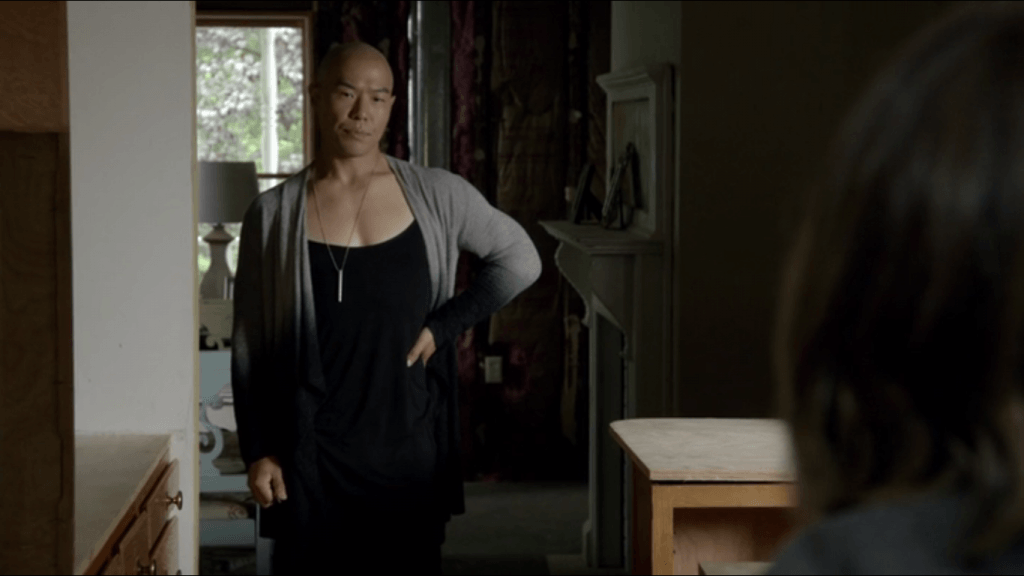 And you say blood in Banshee! We’re back in the town giving Gotham City a run for their murder rate. We open up with the woman (Winona) who was “Chose” sitting in her car and psyching herself up. Anytime you see someone in a car with a thousand-yard stare over the steering wheel, I can guarantee you they ’bout to do some shit that’s going to require a custodian. Now Winona waltzes into the police precinct talking ’bout she needs to see the sheriff. After spotting Brock she informs him she has a message, that being the killer is never going to stop. Winona (by the way, she looks like a Winona to me. They gave her a name last episode but… again, she looks like a Winona) then reveals she has a tank of gasoline, douses herself, then gets the cook-out-cookin’. Okay… I’m not going tell nobody to how to do their job but nobody tackled her once she raised the gas can over her head? NOBODY? Also, she lit herself on fire rather quick but why it take Bunker 10 minutes to get the fire extinguisher? I feel like Winona knew these cats were failing their fire drills repeatedly.

Over at the Bunker’s residence or non-safe space headquarters Maggie wakes up to a husband splattered in blood, wailing in it butt naked as if he just saw The Shining. Calvin decides now would be a good time for sex (even against Maggie’s wishes) and at her resistance asks if she with someone else, and why they weren’t having sex for a while. Again, he’s asking this while covered in blood. That shit ain’t sanitary first and foremost. He then proceeds to sexually assault his wife and there ain’t shit to joke about there. Calvin needs a bullet put in his ass like yesterday. Maggie gets the fuck outta dodge and sees Bunker at the Precinct, where Brock can tell they are an item and has Maggie holed up at his place. Maggie also tells Bunker that her father is merked.

We see Hood spent the night at Veronica’s on the couch. Apparently he’s been listening to some Drake and goes through her purse while she’s in the shower. Hood finds her pipe (and I don’t mean you’re uncle’s tobacco pipe… or dil– drugs. It’s a pipe used for meth and free basing.) She starts explaining to Hood but he’s like, I ain’t gotta hear it. We good. They found the location of the doctor that does body mods. They show up at a dry cleaners and I’m like, “I thought you were trying to find a doctor why are we– OH GOD THIS DUDE HAS A CLINIC IN THE BACK OF A DRY CLEANERS? HE’S TOUCHING HIS PATIENT’S BREASTS WITH NO GLOVES ON? WHY IS EVERY VILLAIN IN BANSHEE LIKE ‘FUCK SANITATION?'” Homie tries to run out the back but Hood was waiting for him at the door… literally.

[divider type=”space_thin”]
They’re interrogating his lying ass, dude is running this shit so illegally. While Veronica is interrogating him, Hood is lookin’ around, and I’m sayin’, “Where is this dude’s hand sanitizer at? I SEE ZERO NAPKINS!” The doctor wasn’t able to give them a name, but Hood swiped a camera which will mos def give them a person of interest or their guy, at least.

We enter Carrie’s house. We can’t just call it that, we gotta call it House on Haunted Hopewell or Guns R’ Us since we know Carrie is on the fucking warpath. Job hops out the bed lookin’ like 5 billion but still feeling that PTSD. The Saks 5th Gawd dons that halter top and throws on Carrie’s shawl sweatery thing and goes downstairs to discover they’ve got an intruder. Deva baaaaack! She out here being a smart ass to Job not knowing he wrote the book on snark. Job lookin’ at Deva knowing he going to have to be aunite/God parent to this child now and she is going to stress his ass OUUUUUT.

Carrie is at the courthouse when in walks Proctor. Cruz just dropped a dime on all her vigilante shit, so now Kai in here trying to be civil about shit. Talkin’ ’bout how he’s sorry Gordon’s dead and never took their issues with one another personal.

Carrie then comes home to see the prodigal daughter has returned. Of course against court procedure. Deva talkin’ ’bout she ain’t leaving either. Bruh, Carrie better than me. I’m watching that scene thinking, “The fuck you mean you ain’t goin’? Oh, I’m sorry, did you pay for that cereal you eating? Cereal I planned on eating but I guess ‘fuck me,’ right? You paying rent here? Sheeeeeit.” That was all over Job’s face, by the way.

Hood and Veronica go back to the bar they trashed and talk to the bartender. The bartender all calling her out her name… till she pulls out that badge.

Veronica: Yeaaaaah! I’m Feds! Now who was you callin’ out their name? It wasn’t me, right?
Hood: I don’t think he was talkin’ to you. Was he talkin’ to me?
Veronica: NAH I KNOW he wasn’t talkin’ to you ’cause he was lookin’ at me. Were you talkin’ to me?
Bartender: OH MY GOD I’M PROBLEMATIC, I GET IT. I’LL WORK ON BETTERING MYSELF, JUST INTERROGATE ME ALREADY.

They show this guy the photos of a dude with horns on his head, and the bartender is like “Ah man. Yeah, thats the dude right there. Declan Bodie.” First of all… you’re a killer and your name is Declan? Stop it. Kill yourself. And if there are any Declans reading this… I’m not taking that back. Secondly, this dude believes the devil is talking and working through him. Word? Are we supposed to believe the Devil is a great chef too ’cause this dude was cooking his ass off last episode. Is Satan really pissed off and against God all this time ’cause Jesus and some serafims didn’t like his presentation dish of Quail with a hint of suffering and garnished with a lemon zest? Did someone say that shit was dry and made Satan storm off? Is that how this all works? Did I solve the Da Vinici Code?

The bartender only had a name so Veronica calls it into a contact to try and get some hits. Oddly enough, at the precinct Brock is trying to get out and take patrol, and as he goes outside he gets cold cocked by Declan. He comes to with Declan holdin’ a blade to his throat talkin’ that “I’m a vessel of Satan” crazy shit that sounds eerily similar to a certain Republican candidate when you play his speeches backwards. Brock does the realest shit ever and tells him “Fuck You.” Any other person in that position would’a been asking for a brochure about Satan. Declan has Brock close his eyes and leaves him. Brock gets up like, “Really? Town population of 600 muthafuckas and nobody saw that shit? No cop inside watching the cameras seeing me get cold cocked? Nah? Okay. THAT’S COOL.”

Meanwhile at House on Haunted Hopewell. Carrie is downstairs pouring out the empty ass Milk Deva left behind when World War Fuck The House You You Building breaks out. There are folk shooting UP the residence man. They’re being lead by deputy Cruz (who I’m guessing is going to resign now?) but that doesn’t stop Carrie from stabbing a dude with a screw driver, taking the shotty and catching a fucking double rebound man. I feel like that was a record for fastest consecutive kills on the show. Job saves Deva’s ass upstairs, hands her a gun, gives quick first person shooter in real time instructions then tells her to run and hide. 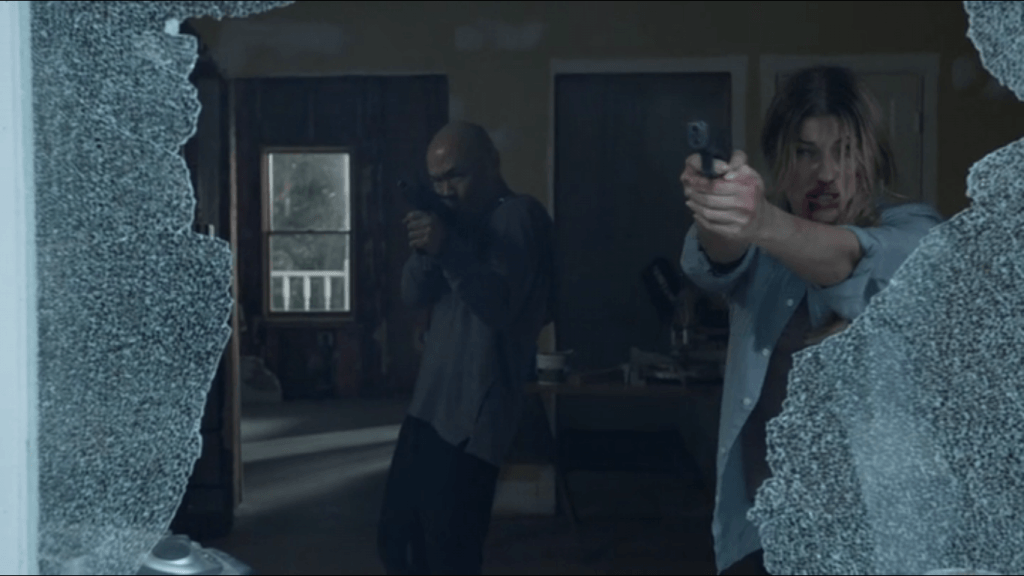 Meanwhile Carrie is downstairs having a fucking Wrestlemania main event with Cruz. They both doing arm-bars and triangle chokes while letting the guns bang out. It felt like I was watching Bret “The Hitman” Hart and Kurt Angle go at it, man. Job catches two kills upstairs while somehow not ruining his shawl. Cruz literally jumps out the window to save her from Carrie cashing in the check on her ass. Oh and Deva’s fine… aside from the fact that she put two rounds through a dude to save her own life. Yuuuuup, Deva caught a body. She’s her parent’s child for real (all three of ’em).

Yo, why Calvin show up at Proctor’s spot telling him “I’m dee captain now.” This dude told Proctor we ain’t working for you no more. Run all your jewels. Oh, here’s Watts’ dead head by the way. I left it on your desk, you might wanna clean that up or else you’ll get ants… … … …and I’m out. Again, I gotta point out, where was Clay during this? What does Clay do when he’s not catching bodies for Proctor ’cause I’m assuming it’s taxes. Calvin is then at Bunker’s house wondering where his wife and child are. Wooooo, you don’t wanna run up on the Bunk B. Bunker tells Calvin you got 120 seconds to leave before I come back out here and re-enact that curb scene from American History X with your ass instead of your head, boi! 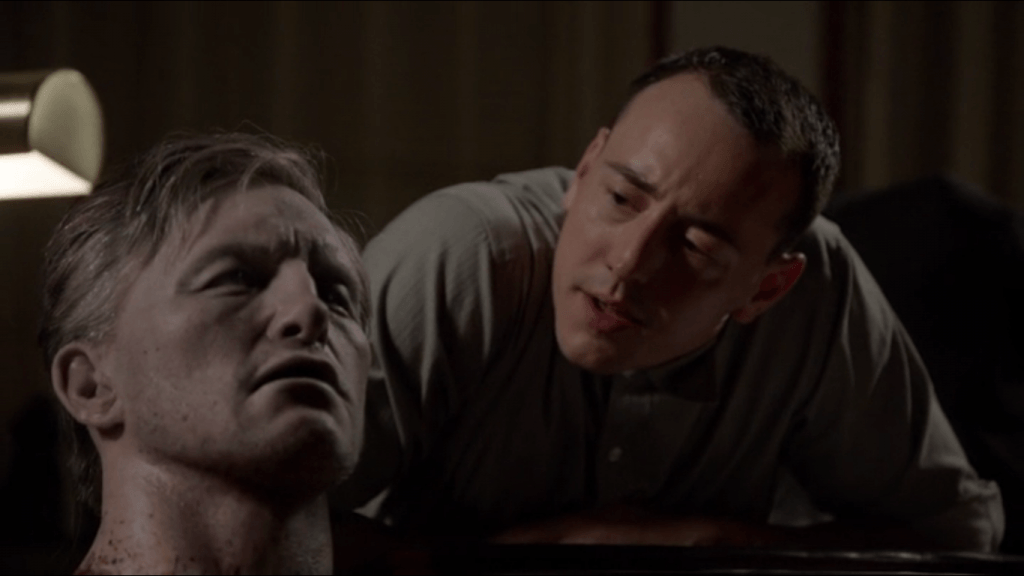 Calvin: Remember when Dad used to take us to the dog fights and I asked if it ever ended in a tie? Remember what he said?
Bunker: No. I don’t, because I was wondering why we were watching corgi dog fighting.
Calvin: It only ends one way, Bunk.
Bunker: …licking one another because that’s literally all the Corgis did — ooooh you mean death. Oh yeah, I know. I plan on killing the Luigi out of you.

Meanwhile, Hood and Veronica were getting to know one another well the night prior until Hood started having flashbacks to Siobhan Kelly the bawse ass bae. Arghhhh, the homie was goin’ through the feels and this might be my favorite scene this season (along with Carrie’s fucking Bobby Drake [look him up] stare through Proctor this episode as well) where we see Hood being cradled by Veronica as he mourns Siobhan. That was acting, baby, that shit was that pathooooos. He gets a call in the morning about the shootout at House on Haunted Hopewell. He gets over there, thanks Job, sees Deva, and goes in on Carrie at first, then eases up and holds her as this war she started with Proctor is coming to a head.

Now Veronica follows up the lead on a statutory rape victim that may have a lead on deck. She checks out her story, then leaves and decides to call Hood to tell him what happened. I’m like yo, you could’a drove the fuck off first, man. Come on, this is Banshee dude! You not safe bruh. Drive! FUCK THE VOICEMAIL! DRIIIIIVE — aaaaand she gets her window busted and gets knocked out. Veronica wakes up, tied up, and starin’ at Declan. Fuuuuuck, man. They leaving us on stall on some cliffhanger shit right here, but I think Veronica is going to pull some shit outta this one. She’s too crafty to catch that long goodnight this easily. 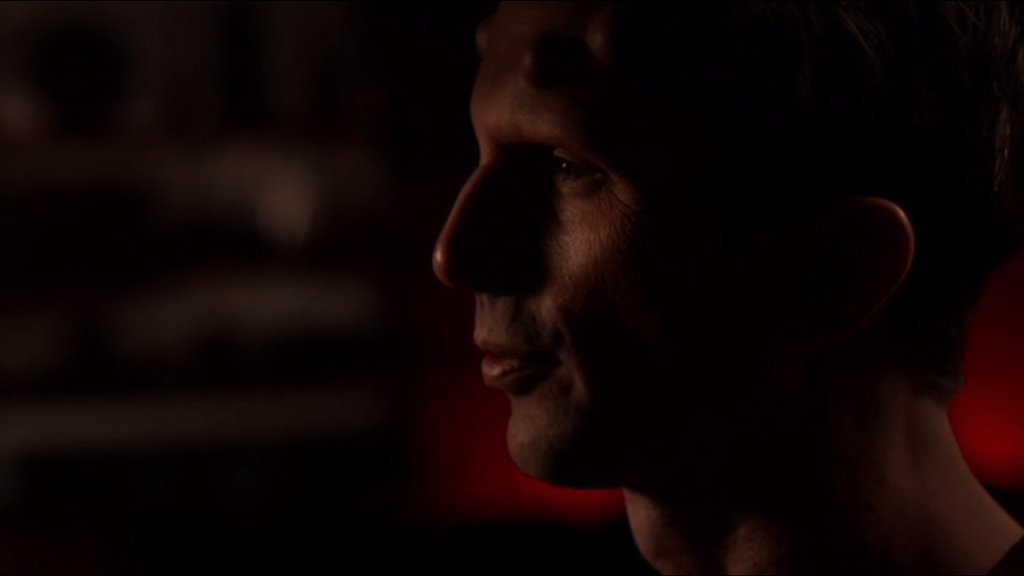