Ever wonder what it be like if comic book characters did remixes to hip-hop tracks? Probably not but since that’s the kind of thing that goes on in our mind here at Black Nerd Problems we decided why not. We’ll call this installment: Bars in Panels ( a throwback to our prototype that stated on tumblr). In this episode of we’ll take the X-Man Cyclops whose been going through a lot lately as field leader / mutant revolutionist in his Uncanny X-Men series and allow him to get some of those frustrations off his chest to the stylings of contemporary artist Jay-Z. The song of Cyclops’ choosing is “Somewhere in America”

Shout out to new debuts and back issues
New mutants with new stacks
I been X-Gene Retro act, but I’m just bringing it back Like Cable did with 6 Pack
New mutants, they looking up to me
S.H.E.I.L.D. Agents they lookin round for me
You can turn up your nose homosapiens Never gone turn down Homo-Superior homie
Knock knock I’m at your nation’s house 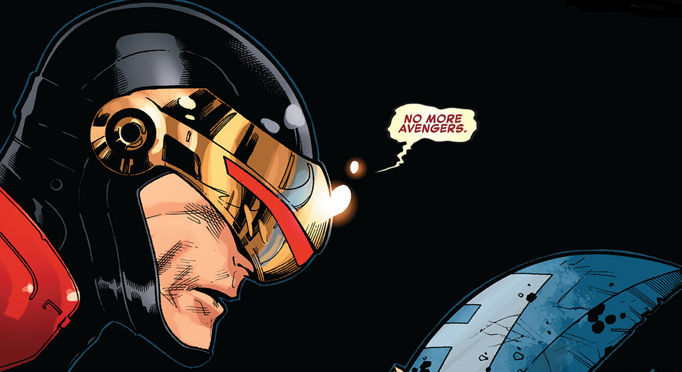 Straight cash I bought ya nation out
You shoulda came to the housewarming
Came and see what Utopia was about
Black Bird in the driveway
A buck 35 above the highway
Emma Frost on my intercom Loud as fuck, I did it my way

A million new mutants before the album dropped
New costume after shit got real
Ask Wolverine about me
Them claws retract, a mutie been trill
By the way, fuck your math You ain’t gotta count them mutants I can add
1 million, 2 million, 3 million, 20 million Oh, I got Maria Hill mad.

Might crash ya Internet And I ain’t even youtube that
When I was talking to Avengers
Last thing they wanted was that picture snapped
S.H.I.E.L.D. still lurking They see I’m still putting work in
Cause somewhere in America Scott Summers is still Merkin