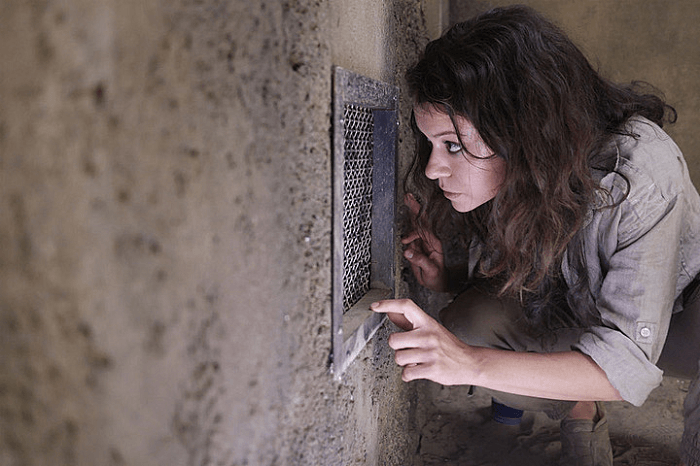 Helena wakes up after what we imagine was a hella ass-whupin after she Shawshanked the lab rat last episode. The scorpion giving her shit because instead of escaping, she was in the cleaning room failing at Operation. She finds a metal piece in the sand and goes back to her Murda Muzik Season One days and starts carving the Grand Canyon in her back to get that release.

Probably could’ve just asked a guard for a cigarette, but whatever. The scorpion travels to the other cell and there’s Sarah, knocked all the way the fuck out.

Sarah wakes up in the cell, not knowing where the hell she is. And since it’s a pretty white woman waking up in imprisonment, it looks like the plot of every other horror/suspense film in the last decade or so. Before Sarah can even find true north, Helena start trolling her through the vent.

Sarah, who basically sent her kid away for the 14th time in less than 2 1/2 seasons, has done nothing but look for a way to find and free Helena, but Helena let Den Mother get in her head and thinks that Sarah wake up every morning listening to those Judas Mixtapes. The scorpion basically pumping up Helena like cats used to do to Jesse Jackson when he ran for office. Helena just sitting back like, “yeah, fuck em.”

Art is worried about Sarah because Sarah was supposed to check in and hasn’t yet. He’s got a knock at the door and it’s she who be cast out, Gracie herself. She’s got nowhere else to go, she lookin’ at Art like, “Yeah, I know you didn’t plan on this, but your day just got maaaad complicated bruh.” Art takes her to the safest people he knows…

…which means that Art doesn’t know any safe muthafuckas at all. They end up at Mrs. Bourne Ultimatum’s spot, but Fee is like I’m really not here to be babysitting the long lost granddaughter of the Westboro Baptist Church.

Cosima is meeting a blind Internet date who is blonde and pale enough to get Anne Rice to write a book around her character. I know, Cosima is feeling down because her French shot-blocker girlfriend dumped her for a job, but she way too confident and way too fine to be acting this desperate around Killer Frost, fam.

Sarah is trying to break this shit down Helena, but she too busy doing cuddle time with an arachnid to give a fuck. But it’s obvious she’s been casing the joint because she knows exactly how long it takes for the guards to get from one door to the next. They come and take Sarah to infirmary for her yearly exam.

Sarah comes back salty and is done playing games with Helena until Helena let’s her know she might have found a way to escape.

In the infirmary, Den Mother is debriefing Mark and giving him shit about rocking a wedding ring. She tells him to remember that shit was the Matrix before he took the blue pill. Kind of creepy. But yo, what are the odds that sociopath scientist positioning herself as the mother of like a dozen clone boys ever had an inappropriate relationship with any of them. I mean, slim, slim at best, right?

Back at Mrs. S’s spot, Felix is going through the closet and finding all of Sarah’s season 1 clothes to give to Gracie. He’s confrontational with her.

[quote_simple]Felix: You know I date men, right?[/quote_simple]
[quote_simple]Gracie: Well, I didn’t want to stereotype, but you are like the prettiest person on this show and you wear a lot of sweaters with swooping neck lines. I mean…like a lot. [/quote_simple]

Gracie tells him she’s not a Prolethean anymore and promises to never protest at someone’s funeral again if they let her stay there.

Sarah is still trying to get the plan from Helena, but Helena is on some, “try not to hurt yourself by thinking too hard” type of shit. She does the countdown, so you know someone is coming to their cell, so impossibly handsome Paul and impossibly handsome Paul’s facial hair come bursting through the door. Paul for real look distraught that Sarah is locked up, but Sarah could give a good gotdamn about fashion models looking vulnerable right now. Sarah starts giving dude 16 bars of go to hell, while Helena in the back like a hypeman.

Paul claims he just trying to help the fuckboy clones and Sarah is like, bruh, help them? You know they out here raping women right? This shit is like Game of Thrones every time they go to a bar. Paul tries to guilt trip Helena about killing the Liquid Snake of the crew last episode, but she flips that shit back on him.

Meanwhile, Cosima is getting that straight up lumbar support from Beyond the Pale on the first date. Cosima runs down her history to her, because telling this total stranger all your business when you know people are keeping tabs on you is what all smart scientists do. Then Tinkerbell seals that trust bond with her.

Helena is doing her Insanity workout while Sarah keeps trying to find out what she’s got planned. To break some of the ice with her, we get the Sarah Manning secret origins about how she was a terrible mother before. I mean, sure, let’s assume a lot of that has changed.

Felix is trying to get Mrs. S’ origin story out of her when Gracie comes down the stairs looking like a Nirvana roadie. She was trying to get loose at the club but both Fee and Mrs. S see that as a TERRIBLE idea. If Gracie run into any dudes half as bad as the fuckboy clones, she might wind up pretzeled on the side of the road before midnight.

When the guards come to get Sarah again, she creates a disturbance and provokes them so she can make a quick trip to the infirmary again. Ironically, these cats know all about Sarah’s DNA but still don’t know who they fucking with as she starts eyeballing the medical instruments.

Fee figures the alternative to Gracie going out into the world and then showing up on “I Survived” 5 years from now is getting her filthy drunk, indoors. She start taking that Gin and Juice to the head and immediately wants to start dancing. Of course, she needs to mind her surroundings because she should’ve asked the Lord of Dance for permission first.

Sarah gets back from the infirmary and Momma Bird’s some pliers. She gets them over to Helena so that she can pop those ankle bracelets and get into gear.

Helena been saving up all the margarine and greases herself up like she about to slip into a wet suit. She uses the pole from cuffs and pops out one of the bars on the window, allowing herself to slip through. She goes Sam Fisher on the camera which causes one of the guards to come and investigate. Sarah distracts him and then…

…Helena impales dude against the wall. That’s two more tattered tears for Helena and she didn’t even have to use her AK. So now the coast is clear for Helena to grab his keys and liberate Sarah Manning. Right?

[divider type=”space_thin”]
Paul is starting to realize that they may not be operating with the best intentions at Castor anymore and starts examining some shit. Basically, he’s looking into exactly what these fuckboys been doing. The easier answer to that question: These muthafuckas been spreading VD far and wide that make your eyes bloodshot and cause you to collapse. Gracie slayed out on the floor unconscious and you can’t blame this one on the alcohol. Meanwhile Helena must have gotten all the next-gen systems because she moving through this compound like Lara Croft AND Nathan Drake. She finally reaches the top of the wall as the alarm sounds, before realizing, “shit, I really left my sestra with these fucks.”

Scorpion is pissed off, but considering it sounds like it smokes 4 packs of Cools a day, it should just be happy to be here. Helena says, fuck it and decides to go back for Sarah.

HERE COME SEASON ONE I LEFT MY CHILL IN SERBIA HELENA BAAAAACK!