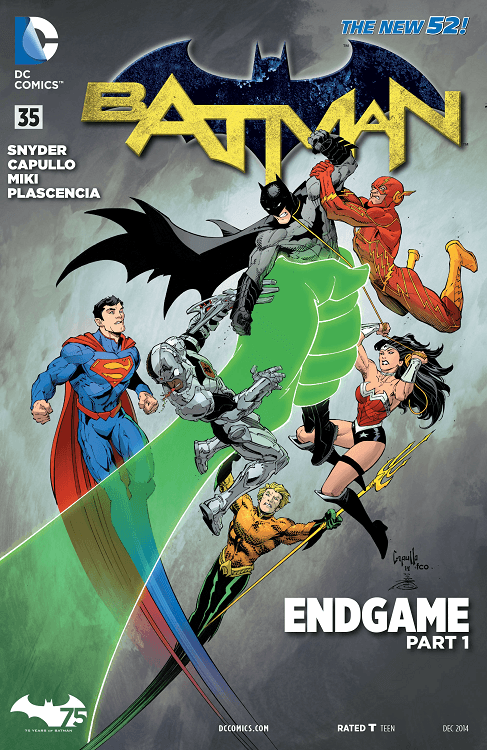 Just when you think Scott Snyder can’t outdo himself anymore than he already has, we’re treated to this month’s Batman. I’ll be honest and tell you that a couple of months later, we here at Black Nerd Problems are still coming down from the high of reading Snyder’s nigh immaculate Zero Year story that shined a new light on Batman’s past. Now, Snyder gives us a taste of what’s in store for the Dark Knight’s future.

It’s fair to warn you that this issue seems to take place sometime after the big goings-on in Batman Eternal. Granted, those events haven’t reached their conclusion yet, but Snyder starts us off in a way that doesn’t require you to do a lot of catching up. The book opens up strong with an monologue about the history of Gotham (something else Snyder got really good at) as a metaphor for the latest threat coming for Batman. As our hero patches himself up after a long night a face punching, he receives an impromptu visit from the Justice League…and not a friendly one. Upon reading, I could practically hear the message boards losing their shit over Batman going up against the Justice League right in the middle of Gotham. Because, for some reason, Batman dismantling good guys has become a degree of nerd wank topped only by the end credit scenes of Marvel movies.

Of course, his methods for fighting the League are innovative and very entertaining. But none of it holds a candle to the big reveal of why it’s all happening. And though it is a fantastic read, the return of Greg Capullo is the glue that holds it all together. His take on the League members really captures their essence in an fun, eye-catching way that leaves you almost unconsciously turning the pages to see more. There’s also a short supplemental story from James Tynion IV and Kelly Jones that offers a different (and intensely sinister) vantage point for a look at a villain we haven’t exactly caught up with in quite a while, certainly worth the annoying price hike this book experienced.

Bottom Line: A smart, exciting addition that makes the case for Scott Snyder’s admission into the Batman Hall of Fame. 9.5 out of 10