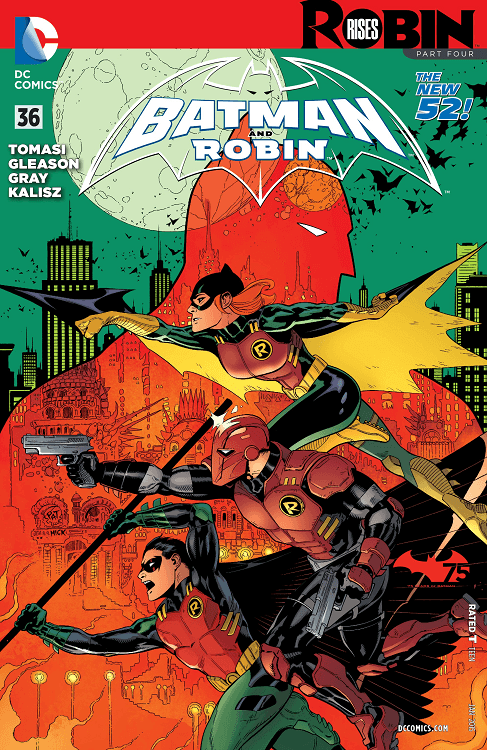 If anyone ever does a Batman film where he has to rescue someone close to him, they need to make sure they follow the Taken-esque theme of this issue. In “Batman and Robin #36,” Bruce will do anything to see his son, Damian Wayne, be returned safely. Not only did Bruce go to a completely foreign place to get his Liam Neeson on, he rampaged when he got there. This man flew (yes, Batman could fly) through a spaceship and didn’t even look back over his shoulder to watch the explosive havoc he’d left behind. Then this man took on a full army on his own.

Meanwhile, damn near every protege that the Dark Knight ever brought into the Batcave had teamed up, in matching uniforms, to come to his aid– with the help of Cyborg. Eventually they all team up and Bruce reveals that he hadn’t gone nearly as insane as depicted. Shocker– He had everything under control. This entire rampage of fatherly vengeance was actually a tactic he was using to get the appropriate reaction out of his opponent.

Final point. Have you seen this cover? I could go on for hours about it. Batgirl, Red Hood and Red Robin flying across the sky with Gotham City as their backdrop. The silhouette of Batman, their surrogate father figure and sensei looks on over his shoulder as to show that he’ll always be watching, even as he leaves them to their own devices.

This issue was great because it brought together a lot of the favorite characters of the Batman universe, even Ace got in on some of the action. It showed a Batman with something to lose and he acted how you’d expect. Then things came together as his former sidekicks all came to his side. Now it’s up to Batman to take on what looks to be Darkseid.