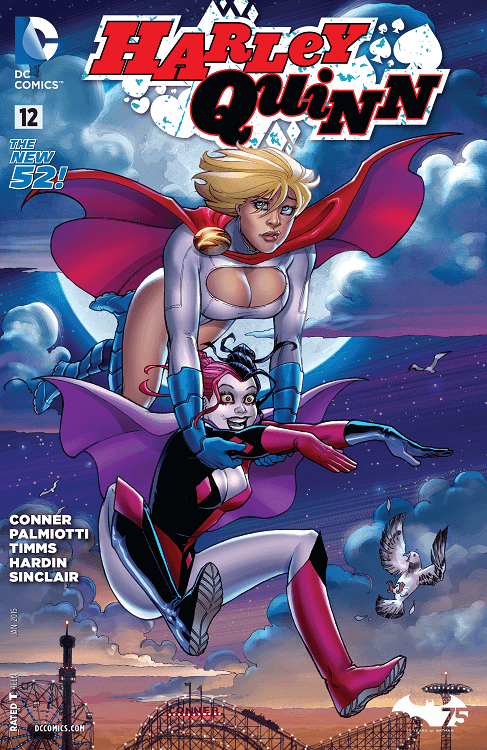 I don’t have too much of an extensive knowledge of Harley Quinn outside of her connection to the Joker through various cartoons. I also know that Kevin Smith named his daughter after her. But from what I’ve seen so far, the “Harley Quinn” series’ portrayal of the character fits everything the first lady of laughter stands for.

The thing I’ve always appreciated most about Harley is that she doesn’t take herself too seriously, like so many other characters and series try to. Her ad-libs include quotables like “Did she just say her name was “I Did Jer Mom?,” Holy Cannole!” and “Farfignewton!” as she blasts a laser into a crowd, which all made me LOL on a regular basis.

I really enjoyed this issue because of how it portrays its female leads. I couldn’t ask for much more. Yes, Powergirl is rather “well-endowed,” and everyone knows it. But she owns it and will still kick your ass for being a sociopathic deadbeat dad. It also gives you characters to hate that you look forward to seeing get their asses kicked– including a giant pizza.

There were pop culture references of “Space Hitler” and a giant-sized pug that allows his wife to have a side lover, but gets mad that he’s of a different species (Donald Sterling parallel, anyone?). We also get a couple corny Batman 66-era villains showing how clueless they can be.

Last thing.  “Infinity Rings?” The writers of “Harley Quinn” just don’t care and are all in for the laughs here. I love it.

I haven’t laughed at a comic book this much since I read Scott Pilgrim. I’m going to read every issue of this series, going back to #1, just for the laughs on a rainy day. It doesn’t try and knock you over the head with a bold message and makes you want to read on because it’s just fun.