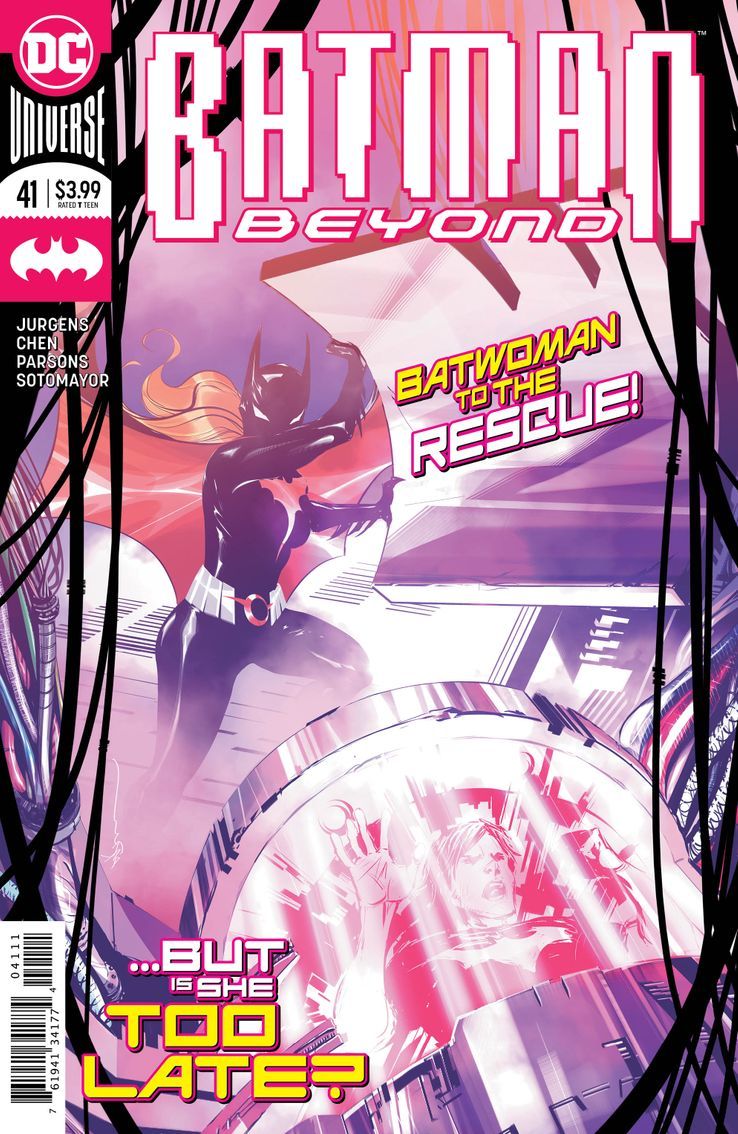 The two main plotlines in Batman Beyond finally converge in issue #41 as the identity of the mysterious Batwoman becomes common knowledge among our primary players and Terry McGinnis’ amnesia storyline comes to a close.

The issue starts out with a reminder that Terry McGinnis was truly lost, oblivious and living without a clue in the world before Bruce Wayne stepped in to take him under his wing.

After having his memories erased, Terry’s been hanging out with a woman named Constance who he only knows to be a failed scientist on hard times. In reality, she’s a failed evil scientist on hard times primarily because she took part in an evil plot and played a role in Terry’s father being murdered. She’s also in love with the arc’s villain, Blight, a former oligarch who’s now a walking nuclear reactor with only hours left before his body explodes.

Terry also doesn’t know that what he believes is his first day at a new job is an attempt to kidnap him so that Blight’s mind can be transplanted into his non-nuclear body.

1.) Why does Terry think it’s normal to have a casual conversation with a glowing man in a robotic body suit? Come on, man!

2.) At one point, Constance says that her plan is to help put Blight in a “younger, handsomer body.” Um, excuse me. Does this mean you’ve been looking at Terry this entire time like a lamb getting ready for some lustful slaughter? Not creepy at all!

This is where our second plotline comes in. For this entire arc, everyone’s been wracking their brain to try and find out who Batwoman is. It’s got to be someone with access to the Batcave, proper training and the knowledge of the Batman legacy.

I wonder who it could be? Definitely not the daughter of Dick Grayson, who spent her entire childhood hearing of her father’s exploits and years of military training. (Oh, and she also has a dead parent, which is like a requirement for being a superhero in the Batman universe.) That couldn’t possibly be the case.

It was thoroughly refreshing to see how naive Dick Grayson, who’s always been known to be a great detective in his own right, be completely gobsmacked the possibility that his own daughter played him. Everyone else in the room — especially Barbara Gordon — saw the writing on the wall while Dick handed his daughter the crayon and wanted to call it a masterpiece.

After this revelation is made, Elainna is seen leading her own Batman-esque internal monologue as she goes on her own investigation into Blight’s actions, only to be surprised when she finds Terry McGinnis being held captive. Remember, she knows who he is, but he has no idea who she is. Even after he gets his memories back.

Overall, this is a fun issue that doesn’t take itself too seriously —which would be hard to do with an amnesia + naive dad storyline. It still manages, however, to bring in some resonating moments (e.g. the last few panels). This is my first arc with Batman Beyond and it’s been fun for all of the right reasons.

Reading Batman Beyond? Find BNP’s other reviews of the series here.