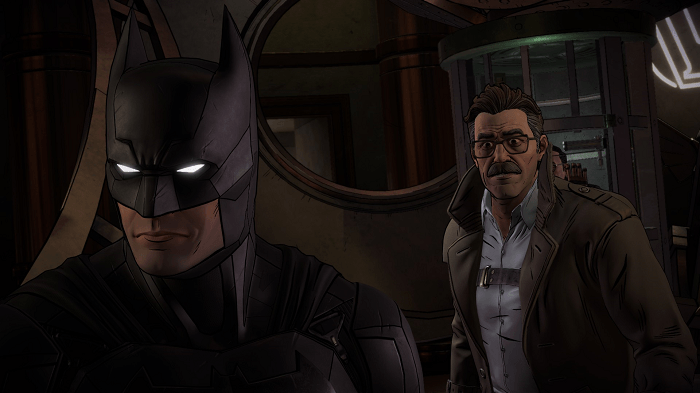 We’re at the point now where Telltale could, if they wanted, put their games on autopilot and never put out a bad game. There is a formula at work and ever present with Telltale games that create a floor their quality will never dip below. Yet, you can see the effort and nuance at play with Batman: Enemy Within for a stronger, consequential narrative with a few new wrinkles in the gameplay.

Batman: Enemy Within, the sequel to last year’s Batman game takes places not too long after the first game. Harvey Dent is still in Arkham with a constantly delayed trial. John Doe is out, somehow. Cobblepot is still locked up, but presumably, a model citizen and Batman has gone from whispers in the shadows to a full-fledged legend for taking down the Children of Arkham. The previous events have also heightened the attention on Bruce Wayne, who obviously was famous beforehand. But now his association with so many people that have turned out to be criminals, coupled with the troubling revelation of Thomas Wayne’s criminal background have cast the favorite son of Gotham in a new light.

The first game took a lot of chances with the Batman canon: Dent having a relationship with Selina. Bruce having a past friendship with Cobblepot. The Joker origins. Especially the Thomas Wayne revelation. Well, Enemy Within doubles down on that, with some aspects working and some that will need the wait and see treatment. There are the introductions of a couple of popular DC characters, but also some created or altered ones for this story. There are also some exits as well. What is striking and instantly noticeable in differentiating this game from its comic book roots, is the prospect of perma-death. Popular characters die in Episode One and that in itself is jarring as they are characters that have existed for 70 years or so. Their deaths aren’t cheap by any means, there is a striking gravity to the events and they will ripple throughout the game for sure. But it is a different sensation as a Batman fan, and I’m pretty curious as to how they will be received by the community.

As advertised, the Riddler is the main protagonist of Episode One (entitled Enigma), but as predicted, he is just the tip of the iceberg. In this version of Batman, the Riddler is an aged villain that was active back when Thomas Wayne ran things but left the city for unknown reasons. His disappearance and re-emergence in Gotham is a mystery, but hopefully, something that gets fleshed out more as the story moves forward. 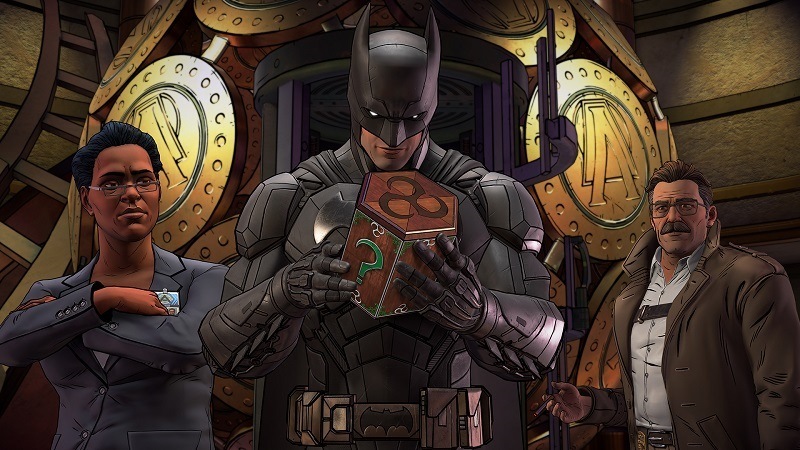 Telltale maintains a similar pacing, mostly splitting your time between Bruce Wayne and Batman. As you would expect, most of Bruce’s sections are more focused on dialogue options than interaction, but the team does well to mix it up some with a few action sequences tossed in. This platform is still a really good one for playing as Batman himself, where discovery, exploration, interacting with gadgets and puzzle solving fit the gameplay extremely well. They have added a couple new wrinkles for interaction that demand your attention, but they don’t stray too far from the formula. And they don’t need to. Batman, even for this interactive adventure game format, feels weighty, responsive and dominating in fitting fashion.

The choices are no joke either. Even more so than before, you feel like every interaction you have with a major character is going to hurt you in some way down the line, if not instantly, so the balancing act between what you feel like doing and what you think you should be doing is always tough. Unlike some titles before, there aren’t any “gotcha” choices, where you make a decision that immediately has the opposite effect. But the choices are telegraphed as far as how it will affect people, it’s just up to you about who and what you prioritize and what you’re willing to give up.

Even with all these games under their belt, Batman feels as natural as anything they do, save maybe The Walking Dead. What hurts their Game of Thrones season, the aspect of knowing the fate of certain popular characters, Batman has bucked that weight of a licensed property and thrown caution to the wind. The jury is still out on if that will work out in the long run, but for episode one, it maintains an intensity and tension with very real stakes.