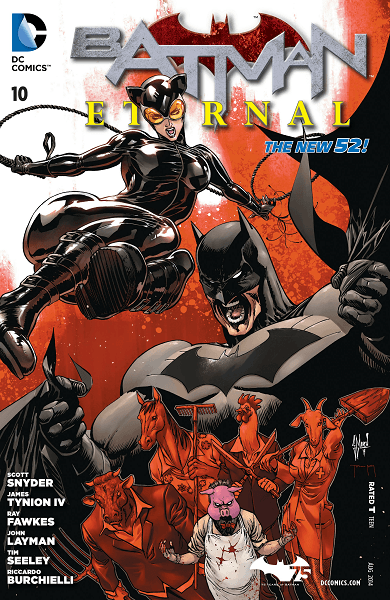 Hopefully, by now, you’re reading this to see if you agree with me about what you just read and not still wondering whether or not this is a title you should pick up. If it’s the former, I’m going to start questioning our writer/reader relationship. If it’s the latter, welcome back….good to see you. Batman Eternal is a weekly title that’s more addictive than some television shows lately (excluding Game of Thrones…I’ve been advised that suggesting otherwise borders on heresy). Sadly, this week’s installment is the result of playing a constant game of Hot Potato with creative talent. You can have good story but not-so-good artwork.

John Layman is still on scripting duties for Scott Snyder’s ready-made plot. We pick up with Catwoman captive to Carmine “The Roman” Falcone whose grip on the city grows blatantly tighter by the day. There’s a fantastic exchange between the two that not only hammers home the point that these two have serious axes to grind with one another, but it also shines a somewhat different light on this villain. Usually, with Batman baddies, their motivations are pretty self-gratifying. They just want to watch Gotham burn (Joker), they’re greedy (Riddler), they want to show a status quo that has marginalized and ignored them how smart they are (Riddler again) or they just REALLY hate Batman (Hush, Thomas Wayne Jr). Falcone hangs onto a very interesting sort of self-absolution reminiscent of Nino Brown “you need me” attitude towards organized crime. He genuinely seems to think of himself as a product of “the way things have always been.” Anytime, you have an antagonist who seems himself as doing society a favor like the Roman does, it should be fun to see what they’re willing to do to get their way. Meanwhile, Layman tries a little too hard to sell us on Bruce Wayne’s new houseguest, Julia. It doesn’t take up much of the book, but a lot of her rebellious nature has been crammed into a few pages, you find yourself groaning, “Okay, fine. You sold me. She’s a firecracker.” We get a couple of brief moments following up on other plot points from the perspective of Lt. Bard, Stephanie Brown and a little cameo from Jason Todd, too. There’s a lot crammed into this issue that you sort of wish would just be handled in dedicated issues down the road, but it’s handled well enough and quickly enough that you don’t mind so much.

The artwork this week, however….is a problem. Riccardo Burchielli isn’t really a bad artist, but with the beautiful work we’ve seen the past couple of weeks from Guillem March, this is a drastic change in style that doesn’t really gel well with past books. Some of the facial designs are curious looking at best. Bruce Wayne seems to be perpetually squinting for no real reason, Jason Todd’s nose is so bizarrely bulbous, I was starting to think Doug Funnie had become the Red Hood in his place. And Burchielli seems to be so opposed to drawing Batman’s entirely defined face in the cowl, you think he might be allergic. This makes for a love/hate relationship with the book this time around, but I honestly believe there’s more to love than hate here, so I’m sticking around.

Bottom Line: Questionable character designs make for a very mixed bag of a book this week, but we’ve seen a lag in art from this book before and it still prospered, so I’d definitely keep this in your weekly rotation. 7 out of 10.