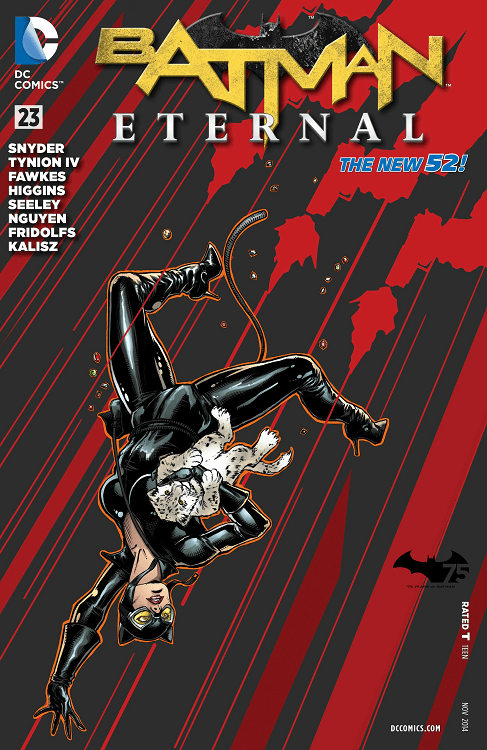 Usually, I have an introductory paragraph here that gives you an idea of how I’ve previously felt about the particular title I’m reviewing and maybe a little context about the creative team and their previous exploits. I’m not doing that this week. Batman Eternal, even with its problems, is fucking awesome and you should be reading it. At this point, I don’t understand your excuses and have exiled you to sleeping on the couch.

This week, it’s all coming down on Batman’s head as his pursuit of Zachary Gate, the Architect continues. As Hush lets things play out from a safe distance, the mysterious cabal’s plan for Gotham kicks into high gear. Meanwhile, Catwoman gets back to being the underworld’s worst nightmare and PETA’s best friend as she receives a summons from an old acquaintance with some insight into her future as well as the city’s. Both of these narratives do a pretty good job of tying into a lot of what those of us who read the preview for this (Batman #28) title have been waiting to see all this time. This title is really working out well as a less jampacked book. At this stage in the game, it should be okay to allow storylines some leg room as they become more important to the big payoff. And in the never-ending carousel of artists working on this book, Dustin Nguyen is back to doing the Lord’s Work. My favorite panel is of Catwoman navigating the city with the smoky destruction just behind her.

Bottom Line: A good book has gotten great now that we’re in the thick of what looks like phase one of the payoff. 8.5 out of 10.