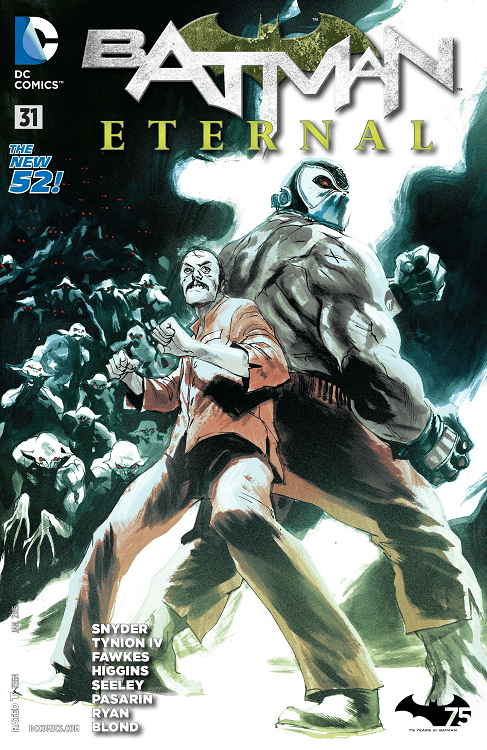 So, I’ve basically decided in advance that this is going to end up being one of Batman Eternal’s more memorable runs. So far, the Fall of Arkham has been nothing but exciting. And the creative team has been doing everything right from well paced, easy-to-follow action beats to conflict around every corner. Can they stay on a roll while remaining true to Scott Snyder’s “big picture?”

With Ray Fawkes still at the helm, he basically straps a parachute to your back, a camera to your head and pushes you out of the plane right after Batman as our hero soars headfirst into the smoking crater that was once Arkham Asylum. With a laundry list of villains free and trying their damnedest to overrun the police, things quickly turn into Project X: Gotham Edition. While Batman tries to keep the bad guys at bay, down in the rubble, Alfred is in bad shape until he receives an unlikely assist from Bane. This doesn’t have much to do with the review, but I’ve realized that anytime he’s in a comic, I can’t help but read all of Bane’s parts in Tom Hardy’s voice from the Dark Knight Rises. And there you have it. Now, you know something odd and completely irrelevant about your weekly Batman Eternal reviewer.

Anyway, Fawkes does a commendable job of keeping a manageable pace going that makes brief pit stops for exposition while still being exciting and fun to read. Fernando Pasarin’s artwork is still every bit as good as it was last week. His action beats are a delight. Most notable of his contributions this week would be these epic shots of Batman taking on some Gotham’s worse like it’s nothing while delegating to the newly dubbed “Penny-Two” (by the way, Julia Pennyworth freaking out trying to do Alfred’s job was a dope moment).

Bottom Line: This story arc has been a really good look for Batman Eternal. Hopefully, the book can continue with this kind of quality action. 8.5 out of 10.