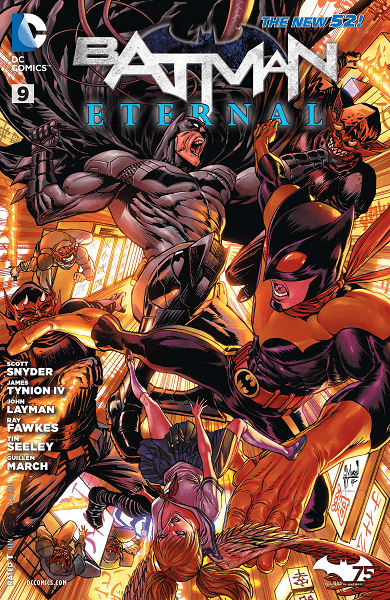 This is the second week in a row that’s left me wondering if I’m starting to develop a crush on this book. I’ve written in previous issues about how Batman Eternal came across as a love letter to the working pieces that keep Gotham running (and the ones that conspire to tear it down). This week’s issue is an indication that I was obviously thinking smaller than Scott Snyder and his team had in mind.

This week, Batman leaves town for a few, setting his sights for Hong Kong to shake down the crime element in search of a key to beating Carmine Falcone. This leads to a team-up with Jiro, Batman’s Japanese counterpart. This is awesome because it breaks up the eventual monotony of the Penguin/Falcone war without veering too far away from the main narrative. Also, it shows the series as not just having a reverence for Gotham, but for the Bat-universe as a whole (including the globe trotting Batman Inc). Meanwhile, in Gotham, Catwoman is on a tear through the criminal underworld, making sure Falcone doesn’t get comfortable in the Bat’s absence. I appreciate the gender politics with this particular depiction of Selina improving a bit from the last time we saw her. I was starting to get the impression that a 14 year old boy with a Maxim subscription was making all the decisions on her poses and innuendo. John Layman spares no expense to give a very kinetic book that has action and fun to spare. Still, the bad guy Batman squares off with in Hong Kong wasn’t very exciting. He was basically a katana packing version of the Kingpin. I get the idea behind the aesthetic and giving some symmetry in the comparison of criminal elements between cities, but even with that in mind not really a huge challenge for the Dark Knight Detective. Guillem March is still delivering some of the best pencils this book has seen so far. His ominous depiction of Falcone is the best I’ve seen since Tim Sale himself.

Bottom Line: Even with a lackluster villain given too time panel time this week, this book is still a pretty good example of the things that work best about a Batman book. 8.5 out of 10.