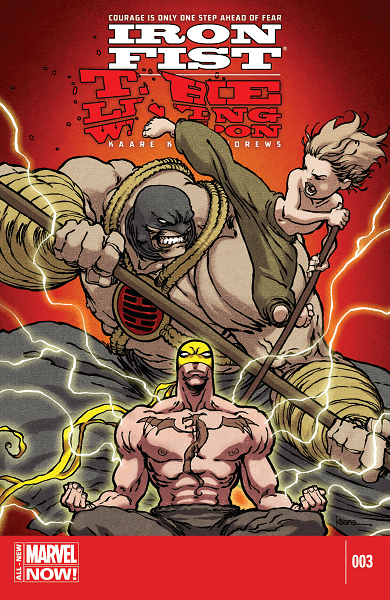 No, seriously….why don’t we have more kung fu comics? We need more kung fu comics. Because this kung fu comic is not far from being immaculate. Kaare Andrews is not just in the fastlane making short work of a LOT of other books. He’s lapping them a la Captain America outrunning Sam Wilson in The Winter Soldier.

In this issue, our roundhousing hero, Iron Fist rushes home to the magical kung fu heaven of K’un Lun only to find it burned to the ground. Unfortunately, in his search for answers, a reunion with his former master doesn’t exactly go as planned. An equal share of the issue is dedicated to more looks into Danny Rand’s childhood and motivations before becoming the living weapon of Kung Fu Heaven. Andrews doesn’t waste a single moment when it comes to putting the weight of the world on Rand’s shoulders. Of course, as is the driving element in most kung-fu tales, he’s seeking revenge and redemption, but there’s more to it. As we’ve seen in previous issues, this is a different Iron Fist from the one we’ve come to know, brooding and stoic, feeling broken from several years of battles, unable to cope with civilian life.

More than anything, he’s a weapon in need of a target, just looking for a fight. Andrew’s artwork is stunningly stylish on every level. Every kick looks lethal and every punch flies right off the page and puts you on your ass. Every scene set in the present oozes desperation and misery while every one in the past looks cracked and faded like the reel of an old martial arts film. Seeing an Immortal Weapon unleash their divine power is a thing of sublime ferocity. Marvel would be committing a cardinal sin to not let Andrews at least consult on the upcoming Netflix series for the character.

Bottom Line: Kaare Andrews delivers everything a kung fu comic needs to prosper. Again. 8.5 out of 10