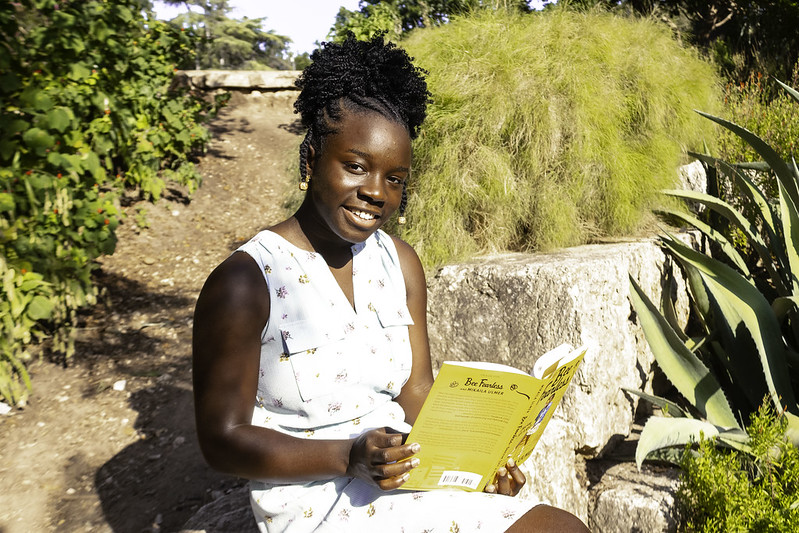 At the time of this writing, only 13 of the word’s 500 largest companies are led by women. Of those, according to Forbes, none of them are women of color. The business world is white-male dominated, which isn’t news, but it’s that landscape that makes the story of Mikaila Ulmer stand out all the more: Bee Fearless is a middle-grade memoir about a young Black girl and her family starting a business and having it grow beyond their dreams.

Written with ghostwriter Brin Stevens, Bee Fearless captures Ulmer’s voice as a bright-eyed entrepreneur learning the ropes of business and eager to share what she’s learned. And it all starts and ends with bees: she was stung twice as a child, and instead of fearing bees her parents encouraged her to learn more about them. That experience, coupled with a local kids’ business fair and her grandmother’s recipe for lemonade with flaxseed, put Ulmer on a path that would lead her from a curious 4-year old child to a deal with Whole Foods and meeting Michelle and Barack Obama at the White House.

Now she finds herself as one of TIME magazine’s 50 most influential teens, but her decade-long journey to today is one of small successes that gradually accumulated into big ones. Since founding the small lemonade stand in Austin, Texas, it has grown into a company with its product sold in over 100 stores.

The tone of Bee Fearless is a kid-to-kid guide to following your passion and doing what she did, sharing with young readers the lessons and vocabulary she learned along the way: guidelines like learning to give first, save next, and spend last, and making a business plan with a mission, vision, and goal. The story is truly adorable and you can’t help but root for Ulmer’s success–who doesn’t love an underdog story of a bright young person–and young readers will be especially charmed by what Ulmer was able to accomplish. An accompanying jealously might accompany that charm though; not by begrudging her success, but through a pang of unfairness that young readers might feel but not yet be able to articulate.

Bee Fearless perpetuates the myth of the genius wunderkind who can do it all. Her company, originally called BeeSweet Lemonade, later changed to Me & the Bees Lemonade, is attributed to her as a four-year old, along with the growth that led her to an appearance on Shark Tank and a subsequent rise in her fame and demand as a middle-schooler. “Wake up early for school and put in a full day of studying, listening, and participating. Friends also must remain in your life,” she explains, the kid version of a self-help book telling parents that they can have it all. “And don’t drop extracurriculars. I would still find time to dance and rock climb and play volleyball. I also continued to be involved in school plays and other after-school activities.” Eventually Ulmer becomes a CEO and student athlete who also started her own nonprofit at 14, the Healthy Hive Foundation.

Like most business motivation books, it dips into the realm of business fantasy by mitigating the role that privilege, parents, and sheer luck plays in such an anomalous success. Am I glad that a young Black girl and her successful family are beneficiaries of such success? Absolutely. Still, it’s always worth approaching these types of tales, and their underlying question of “why can’t you do this, too?,” with caution. Her father was a business operations specialist at Dell, and her mother the owner of a marketing firm. With all its charm, Bee Fearless promotes the familiar capitalistic lie, repackaged in kid form, that financial success is for those who work hard. It applies to entrepreneurship the magical story we’re used to seeing in other child stars–the myth that their success is predominately theirs, like a child riding their bike for the first time, so enraptured in wonder that they discount the parents holding the bike straight.

Bee Fearless acknowledges the importance of creating a brand story without acknowledging what would be obvious to adults but lost to most children: Mikaila Ulmer herself is the product. In that way, the book is akin to Me & the Bees itself. That’s not to discount the power of her story–I’d recommend it to young readers–but to couch that recommendation with a warning to parents on guiding them to highlight the joy that Ulmer brought to the table. The success is inspiring, but the passion and curiosity that Ulmer displays in her journey are wildly important as well. With or without the fame that followed.