This book has been gaining momentum over the last few issues and the tension continues to build in this one even if this wasn’t the best of the run thus far. This is a pretty busy installment as the band prepares for a book signing and the last concert of this tour. A lot of time was spent on the details of the band and how it formed — some interesting, some not as much. After five issues, Fletcher is still asking questions but not giving much if any answers at all. The characters are at least curious how Dinah and Ditto came to join the band, but again, we aren’t really any closer to finding out.

Also, the mysterious ninja that saved Ditto in last issue doesn’t exactly seem to be on the side of the angels as Dinah has a run in with her as well. The motives aren’t clear, but it definitely seems that the ninja in white has their own endgame for protecting Ditto and wanting some from Dinah.

The art from Guerra and Jarrell (on a few pages) is good and still works well with the narrative, but is still a glaring difference from Annie Wu who began on this book. Still it is consistent and clean, doing well in the dialogue and action-heavy moments alike. 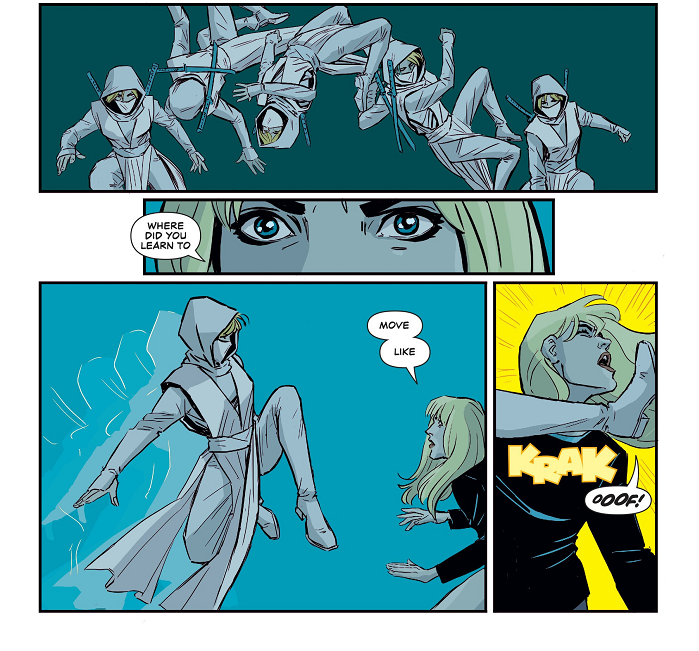 Black Canary continues to be one of DC’s brightest stars, but takes a small step back this issue as it dove deeper into the minutia of the band itself. Next issue promises to be a big one with the inevitable showdown with Bo Maeve and her very Dinah-like upgrades.