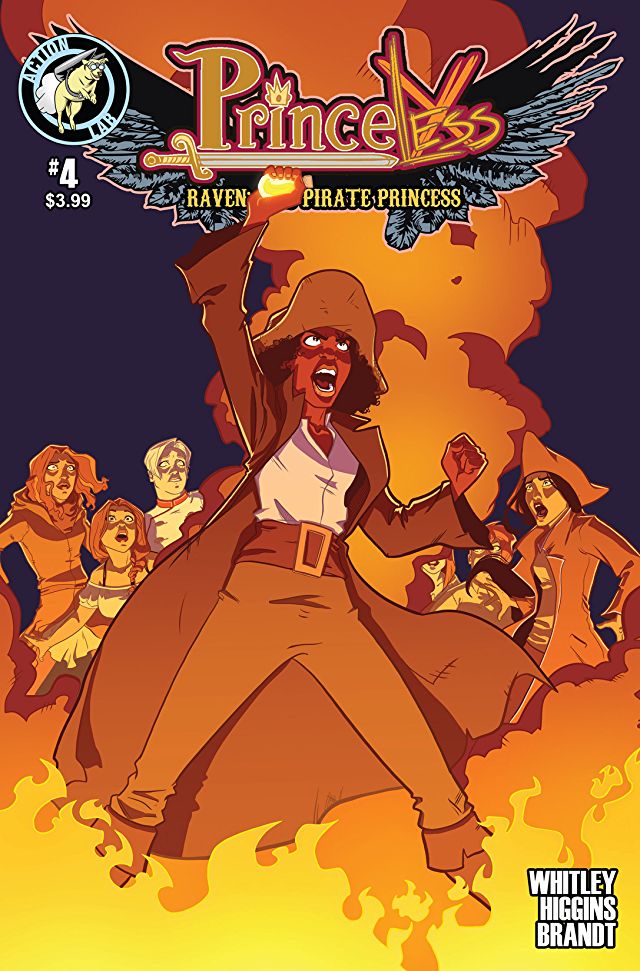 GOSH. Another fantastic cover! Look at the expressive (and frightened) faces of the gals! Look at how fierce Jayla looks amongst the fire and smoke!

Welcome to issue four of Raven: The Pirate Princess and if you’re reading through this issue, you could blink and miss some important backstory and possible foreshadowing between Raven and Ximena on their relationship. Both girls have known each other since they were young and this is especially important knowing that Raven is a queer WOC character. Surprise! As a queer woman, she’s not reduced to some trope or just used as a means of a tragic backstory to further the plot. She’s Raven. Flawed. Lovable. Fierce. Even in a YA comic, it’s totally appreciated that we’re got some representation here on the board. 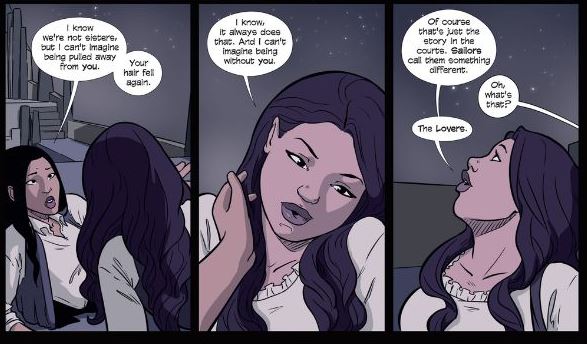 Along the way we see the other women of Raven’s crew and how their many talents contribute to solving the unique problems that come their way. Again, the visual lineup of the crew is too perfect to come by: all the different body types and ethnicities and personalities. It’s fun to see how certain jokes are spun here: “Muscles” aka Katie isn’t thrown off or insulted. Being a person with a large stature and having the guns to prove it isn’t a slap to her femininity, it celebrates her.

We are even gifted with some heartfelt moments towards the end that aren’t too preachy. In one, Cookie reminds Raven as she gets ready to depart to remember why she’s doing this, to remember the task at hand and not get sidetracked as he did by his former the pirate lifestyle, which if you think about it could apply almost universally to a number of situations. The artwork of team Brandt/Higgins really shines halfway through this issue with a big splash… can I say that without spoiling it? An epic GROSS splash.

Ending the first story arc on a solid standing, this issue gets a 10 lady pirate crews assembled out of 10. I always check myself when reviewing my favorite comics to make sure that I don’t give biased ratings… but this issue started off well and had to leave with a 10 rating after seeing Ximena in action to save the day — GAWD. It’s a more hilarious twist because of my name and a certain movie associated with it and welp — READ THIS ISSUE.