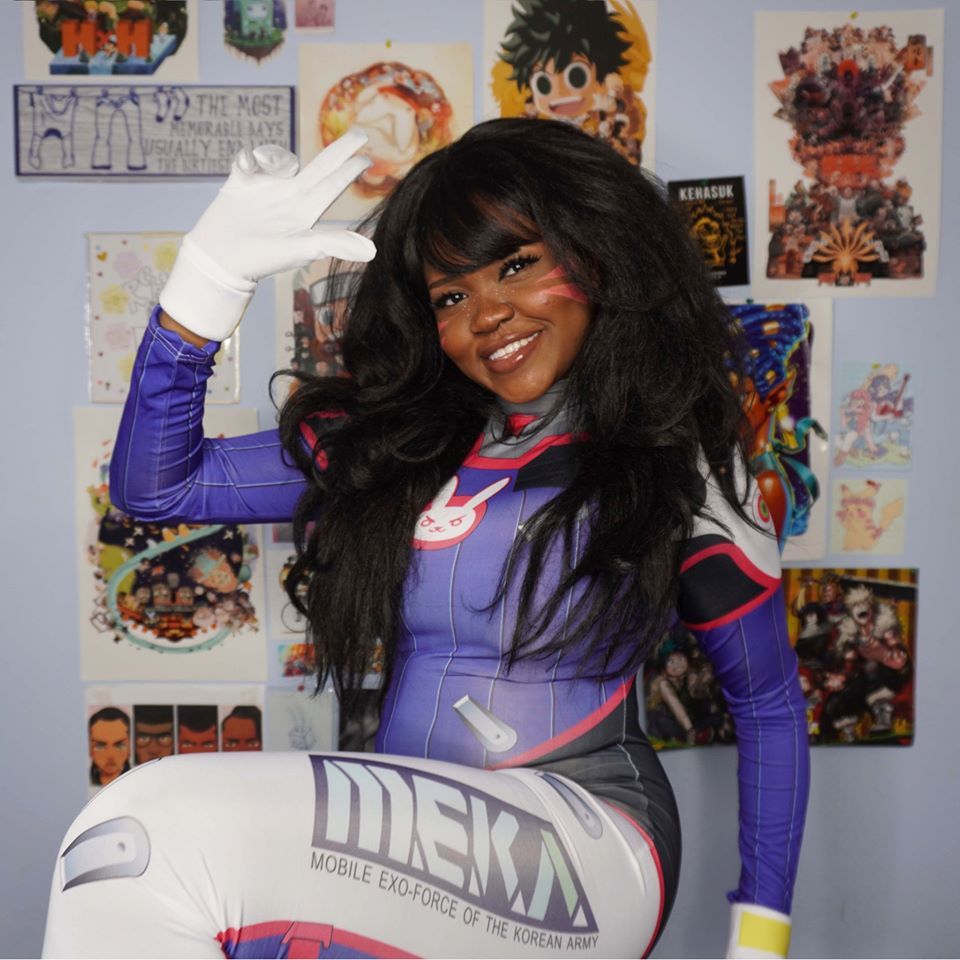 The Black cosplayer (With a capital B, no chaser) and internet homie known as Seun is the queen of all things makeup, cosplay, and comedy. A newer cosplayer to the game, she has an incredible stage presence and loves creating new looks and new ways to make us laugh on a regular basis. This New York-based content creator makes her own wigs, creates Tik Tok videos that are hilarious and include a bit of social commentary and is just a joy to be around. Black Nerd Problems got the hook up for an interview with Becca aka Seunhere and we’re catching that ball and running with it.

Black Nerd Problems: I would love to hear your cosplaying origin story: what initially drew you to it and how long have you officially been at it? Were there any cosplayers that you admired before starting that helped you along your journey?

Seun: Back in high school I heard about this yearly festival called “Sakura Matsuri” that takes place at the Brooklyn Botanical Garden. I thought it looked like a really cool event so I went with my friend back in 2011. When we got there I saw so many beautiful cosplayers dressed up as my favorite characters and I had so much fun interacting with them to the point where I thought “You know what? This is so neat. I wanna do this too!”.

From then on I cosplayed off and on but I started taking my cosplays seriously in 2018. After becoming comfortable seeing myself in cosplay, I began actively posting my cosplays at the beginning of 2019. Prior to starting some of the people I really admired were KieraPlease and CutiepieSensei.

BNP: The #BlackCosplayerHere movement popped off on social media first in support of Twitter user @Vaelniel_ who received unnecessary and gross feedback from racist folks online after going viral with her first ever cosplay of Nezuko from Demon Slayer. There’s a certain level of hate directed at Black women in general — as a darker-skinned Black woman cosplaying, what do you want to see happen in the cosplaying community for those who look like you from here on out? Why should seeing folks who look like us cosplaying and being featured and the like forever be normalized?

Seun: I want cosplay for Black folks to be just that, costume play. This is a hobby we do to have fun and escape some of the everyday struggles that we face. As a community, I would like to see more support and showcasing of Black cosplayers, not only by our fellow cosplayers but also the brands that work alongside us and the anime/comic conventions we frequent. They need to diversify the selection of cosplayers/influencers they choose to appear as guests and represent their business. If young folks see that there is only one type of cosplayer being praised then unfortunately, that becomes the standard/norm in their minds and they can start feeling as though these cosplayers aren’t people they can relate to or aspire to become. Nothing hits this issue more than the well-known statement “Representation matters.”

“I want cosplay for Black folks to be just that, costume play. This is a hobby we do to have fun and escape some of the everyday struggles that we face”

I love making my own cosplay wigs because I’ve never liked the generic cosplay wigs and often felt like the silky texture didn’t suit me. So I wanted to pitch this idea:

If I started making cosplay wigs tailored to Black folks and people of color, would you be interested? ? pic.twitter.com/wtwTlWcZWB

BNP: Earlier this month you tweeted into the universe that you were curious about if folks would be interested in cosplay wigs tailored to Black folks and people of color — thousands of retweets later — there’s a line in your bio stating “Cosplay wigs will be available for order starting in Spring 2020”. It’s super exciting to hear, personally as a newer cosplayer and wig wearer myself, were you surprised by the response to your tweet? Also are they new updates or reflections you can share at this stage?

Seun: The funny thing is, I asked this question on Twitter expecting to get a couple of responses from the people who already follow me, specifically the people who’ve sent inquiries in regards to my cosplay wigs that I make from scratch. I definitely didn’t expect the tweet to blow up the way that it did. It made me both flattered from the overwhelming support, and yet sad to hear all of the stories of people telling me that they’ve always had this issue of not feeling comfortable using the cosplay wigs that were currently on the market and some even said that they avoided cosplay specifically because of those cosplay wigs.

Given the great demand I received for the wigs I am currently changing my initial plans of accepting a few commissions a year to instead opening a wig company which provides textured base wigs tailored to Black folks and people of color. Figuring out the logistics for the company has not been easy, especially after getting seriously injured shortly after making that tweet, but I hope to have everything settled by late spring and then launch my wig site to all of my supporters patiently waiting. 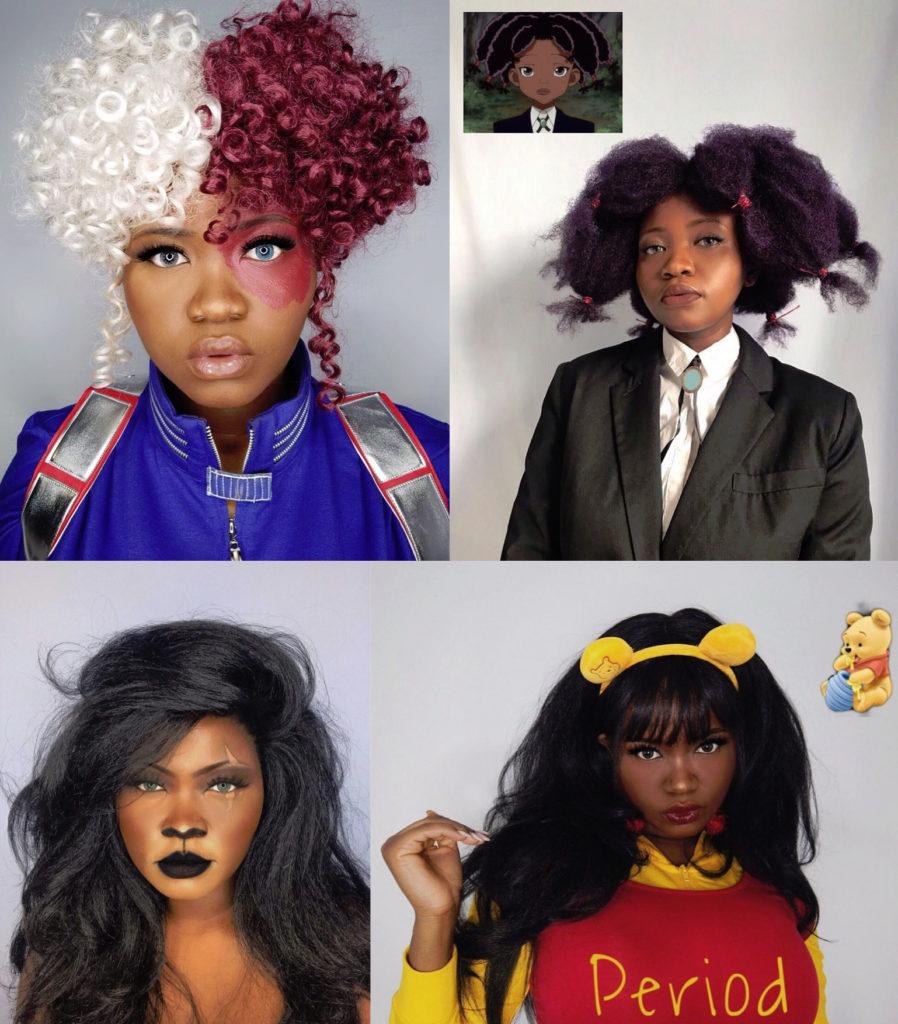 BNP: There’s an Instagram post of yours that I think about from time to time — it’s the one that’s screenshots of a short message to your fans on boundaries and being considerate with tailoring their responses when communicating with you. It’s not revolutionary to the average person yet when I happened to scroll the comments (Yes, I did it — I looked at the comments) I was pleasantly surprised to see many people agreeing with you, sharing their own stories of why they do the same and also sharing their own tips and strategies.

Having online communities and friends to belong to is wonderful yet it can turn up some toxic and very rude interactions for many of us. Especially if you are a marginalized person, and ESPECIALLY if you are a Black woman/femme/female-presenting person in a digital space. Can I ask how the flow of your DMs and other lines of communications are going? Have you received and read any messages of similar stories or tips from others that really resonated with you?

Seun: For a while I was probably the worst person when it came to DM management. In the beginning I responded to everyone, no matter the DM, but I came to find out pretty quickly that a lot of people were either trying to flirt with me, get free promotion, or talk casually when I didn’t necessarily have the time. Making that post really helped to decrease those type of DMs and allowed my supporters to not only understand me as an individual but also the best way to approach anyone on the internet. A lot of cosplayers and influencers in the comments stated that they agreed and shared my post on their platforms for their supporters to see as well. Social media is still pretty new so it’s helpful to set boundaries and remind people from time to time of proper social media etiquette and effective communication. 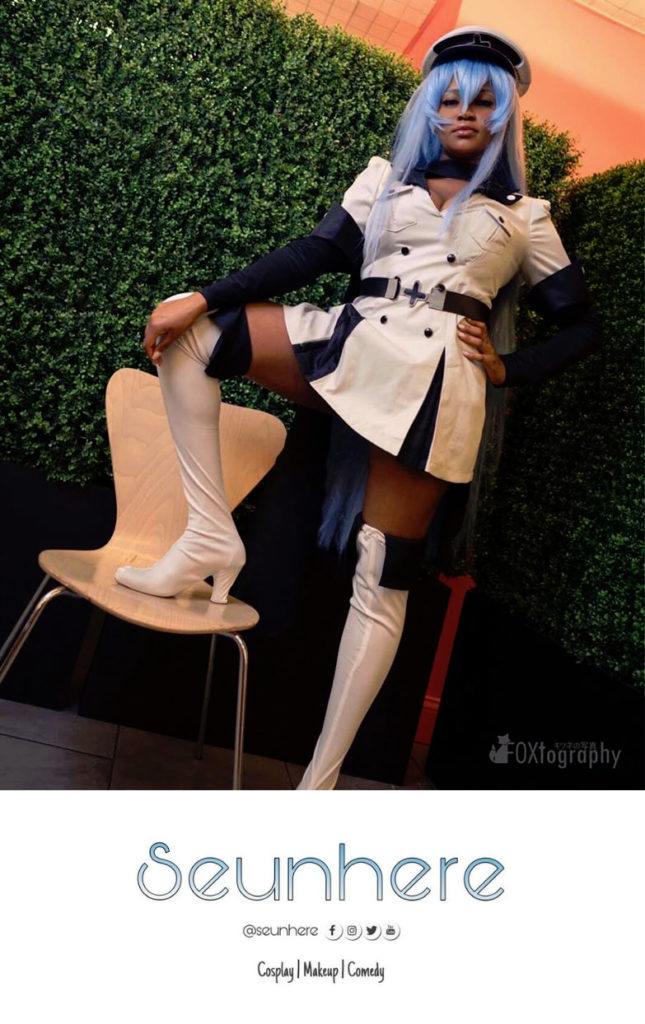 Seun: I loved that I was able to show more of my comedic side through my Tik Tok videos. It was a great outlet for me outside of cosplay and I feel like it gave people a better sense of who I was as a person. I was surprised by the overwhelming amount of support my videos received in just a short time after joining the app and I hope to get back into making similar videos in the future. I think that Tik Tok has really made a name for itself and it’s proving to be the next big wave in social media. A lot of people who mainly focused on the big four (Instagram, Facebook, Twitter, and YouTube) have now added Tik Tok to their rotation or have tried getting into it. I can see it being around for quite some time!

@seunhereTrust me, it works every time ?

♬ Ride It – DJ Regard

BNP: I know you’re apart of the Demon Slayer fan club, what other anime are you all for at the moment? Any new to anticipate for Spring 2020 season?

Seun: My top picks for recently released anime are Attack on Titan, Promised Neverland Mob Psycho II, and Boku no Hero Academia. I’m really looking forward to the second season of The Promised Neverland coming out later this year as well as the upcoming MHA movie.

BNP: Lastly, what’s next for you? I already see that you’ve got a got cons lined up from May to December?

Seun: Next for me is successfully starting and maintaining my wig business. Once I’ve established comfortable footing with the business I would like to begin making YouTube videos to give advice, create tutorials, and just display more of my personality overall. For the rest of the year I have a few cons planned out and the thing I look forward to the most is meeting all of my cosplay friends and supporters at the conventions. I don’t get the chance to message everyone so being able to talk to everyone in person, take pictures, and thank them for their support makes me really excited. The year 2020 has so much in store and I can’t wait to experience it all.

All photos courtesy of the cosplayer with the exception of Akame ga Kill cosplay photo by foxtographylok.