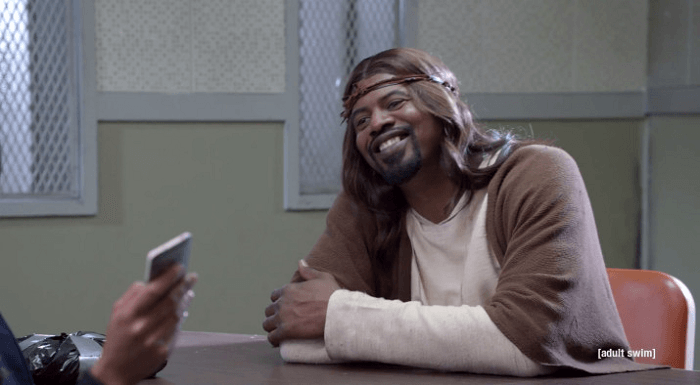 Aaron McGruder, who has been prone to disappear inside of a creative cocoon from time to time, has been pretty popular over the last few months. First came his weirdly timed and hugely vague proclamation that he had nothing do with the ill-fated Boondocks season 4 just weeks before it came out. After watching a couple of episodes, that couldn’t have been more clear. In that same statement, he announced that he had another show debuting on Adult Swim in the near future aptly named…Black Jesus. Maybe it was because I didn’t go searching for information on McGruder’s new IP or the fact that he had another pilot announced that went out of its way in the description to state it was going to be live action, but I assumed that Black Jesus would be animated. It’s not. But the potential is still glorious.

Black Jesus seems to be about Jesus coming back, as a Black man (don’t say shit), in the most ratchet way possible. Jesus is blessing 40s, turning bottled water into Courvoisier, smoking up all the weed and dropping n bombs like so many blessings upon his flock. There are so many ways that this could be a derailed train, but you know what, in McGruder’s hands and with the likes of Charlie Murphy and John Witherspoon, I seriously doubt that will be the case.

Last note: On the surface, you would think that the controversial show that Black Jesus will inevitably be would piss off white people (and the title alone is going to make some conservative radio hosts’ heads explode, I’m sure). But like Boondocks before it, the white people that would actually get up in arms about the content, just aren’t paying attention. McGruder manages to piss off the Black people more frequently instead, which is ironic and hilarious. Your grandmamma that goes to church on Sunday, Tuesday and Friday nights probably ain’t fuckin with this. But that doesn’t mean it won’t be funny.