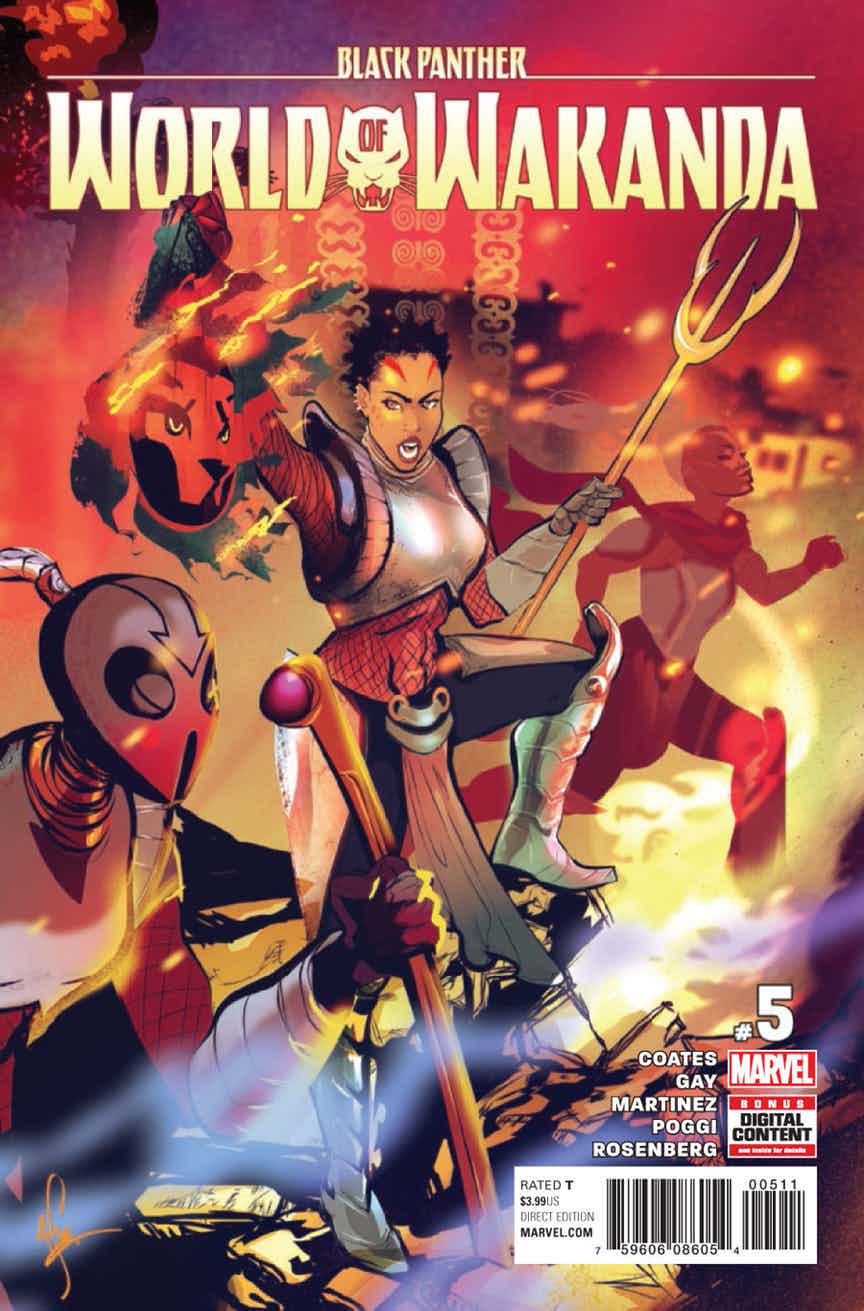 One of the best things for a critic, I think, is when you make a criticism of an issue and the writer addresses it in the very next issue. It feels like someone is listening. Like someone — *sniff* — cares.

My big beef with #4 was that the story was starting to get flat, that it was starved for the kind of fighting action for which the Dora Milaje are famous. Well, open issue #5, with Folami trying to kill our girl Ayo, and getting her ass KICKED. In case you didn’t know, Ayo is a beast hand-to-hand and a smart fighter to boot. Folami has really let her nanites go to her head if she thought she could get the better of Ayo in a fist fight. 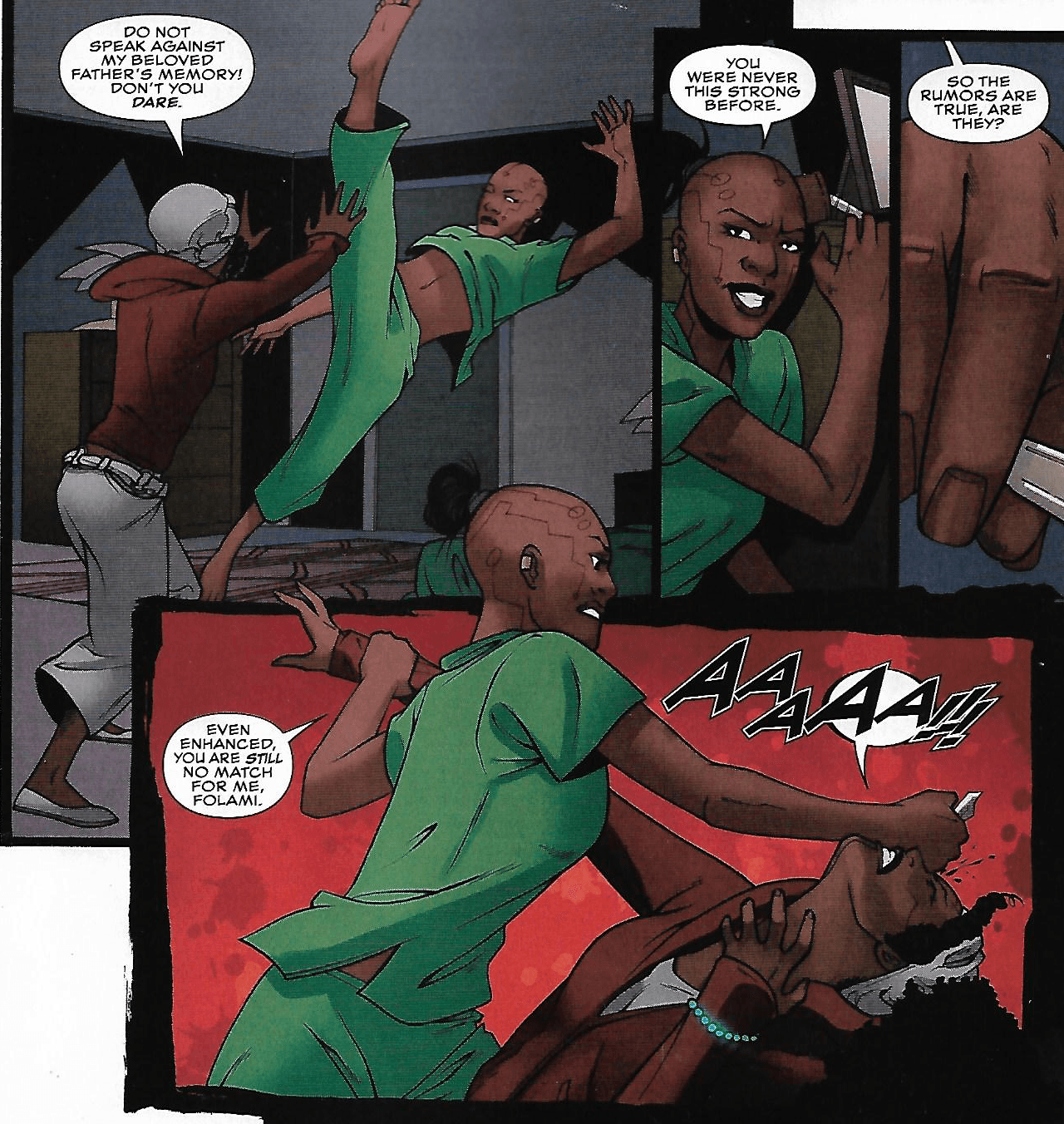 As Ayo is fighting for her life, Aneka has finally come around on the love thing, inspired by her impending execution for killing the chieftain. So that “I want you but can’t have you” melodrama is put all the way down. In just a few panels, the word “beloved” goes from title to endearment with Gay’s characteristic style and passion. 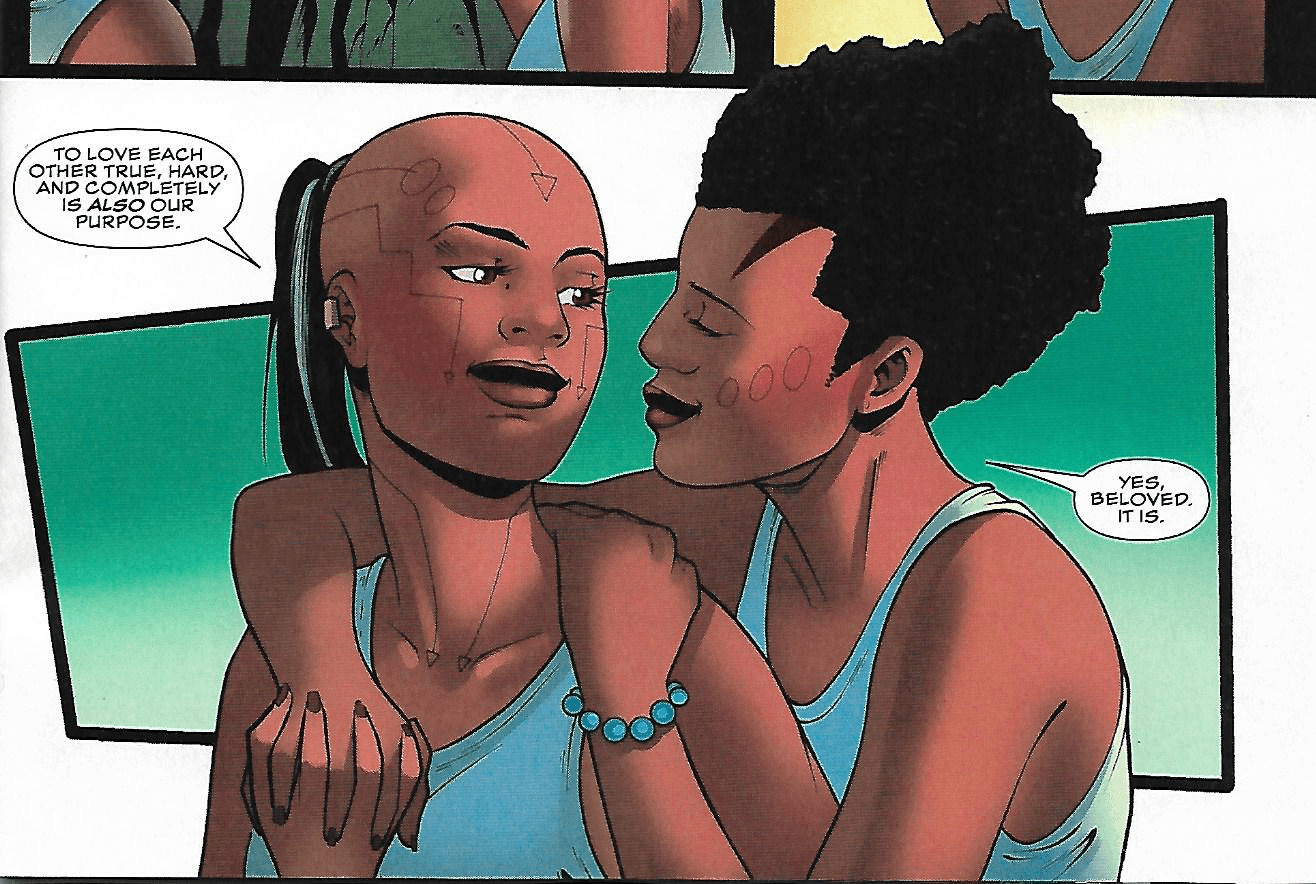 Meanwhile, the people of Wakanda start calling on the Dora Milaje to be way more useful as a police force than as the King’s handmaidens. The women answer this need, with pages dedicated to them breaking up a protection racket in Birnin Azzaria, busting supply thieves outside of Birnin Bashenga, and hunting down a human trafficking ring in Birnin S’yan. These moments illustrate so much of what’s happening “out in the provinces” of Wakanda as T’Challa goes through his soul-searching on King and Country.

Don’t count out Rage-Machine Folami, however. Realizing that she’s not as badass as she wants to me, she goes back to her pusher for more nanites, only to be told that they come courtesy of Zeke Stane. (Flashback, Stane is involved with the white mutants that Black Panther and the Crew fight in Black Panther #7. He also is perhaps the villain of The Crew stand-alone comic coming out soon. Full circle.) Folami is going to remain a problem, either for the Dora Milaje in Wakanda or elsewhere.

With the last pages of the issue, we’re back where we started, with Aneka and Ayo in full Midnight Angels glory, raining down justice with only the tag “The Beginning” at the bottom of the last page.

So great. While there have been some uneven pacing moments this series, overall Gay and team have really pulled together a great cast. I care about Aneka and Ayo, they feel real as women in a way that other women in the Black Panther setting seldom have. The Dora Milaje have been reset from bodyguards to a vital problem-solving force in the country. There are new villains, and new forces at play in Wakanda and beyond that can only get better. By the end, World of Wakanda has delivered on its promise, expanding the cast of characters and points of interest that this fictional country can provide. If you have any interest in the Black Panther mythos, I’d recommend picking up this series, for sure.

From here World of Wakanda continues, but without Roxane Gay, Alitha Martinez, Roberto Poggi, and Rachelle Rosenberg. The next issue will feature Rembert Browne as writer (he’s got Grantland and New York Magazine credentials) and Joe Bennett as artist (who drew the original The Crew series back in the day). The story will return Kasper Cole, AKA The White Tiger, to comics, with a new direction and almost certainly more cross-over with the main Black Panther title and The Crew spin-off. In short, it is a great time to be a Black Panther fan. Keep it here to read reviews and commentary on all this goodness.