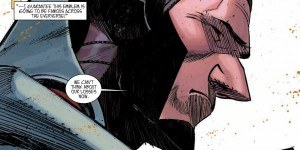 Through five issues, Black Science might be one of the best comics in these panel streets. It gives you everything you could ask for in a comic book: action, well placed exposition, appropriate flash backs for a study that began in media res, and character development. The writing and art are a beautiful marriage.

Last issue, which gave us the unceremonious death of Ward to save Grant’s life before they jumped with the Pillar, landed the team in a more civil place where they can catch their breath. Well, the reader doesn’t get the same luxury as an intruder steals Grant’s children, leading him on a chase and throwing a huge curve into the mythology that Remender has already built. The chilling words of Grant’s “enemy” before jumping away simultaneously answers questions we had while asking brand new ones. This issue might have been the weakest of the five thus far, but the bar was impossibly high and this is still a great issue. With only five issues in, now is a great time to jump in on this amazing book.