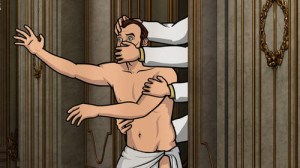 Who said you could drill into my box?!

It’s killing me that we’re no longer using phrasing!

This week, the Fighting Archers took a step back after a run of pretty good or great episodes the previous weeks. Sometimes, Archer ventures from Hilariously funny to just really clever, but not necessarily funny and this was one of those weeks. For a show that uses self referential jokes so much in an episode, those jokes have to be really funny to begin with for the call backs to work and they didn’t so much in Palace Intrigue, Part I.

After last week when the rogue agents found out they were now out of coke business and now into the the selling weapons to asshole dictators business, they take a flight to Central America to get paid for the weapons…even though, their supposed to be supplied by the CIA in exchange for the coke. Not a problem for Malory Da Gawd as she tries to negotiate for the payday anyway.

There’s a ton going on in this episode, which might have been the problem for me: The Dictator is obsessed with Cherlene (who makes her go platinum all by herself / “Outlaw Out-of-Country!”), Archer sleeping with the maid, who actually ain’t a mad, but is the Dictator’s wife who likes to dress up like a maid in the palace when guests arrive and oh, yeah, Krieger meets his clones. Yeah, remember episode “Placebo Effect” (which I listed as the best Archer episode to date) when we found out that Krieger was one of the “Boys of Brazil” aka, a possible genetic clone of Hitler?

Yeah, well, we got clones at the palace, b. I would’ve liked to see them do more with this, but I’m guessing they come into play more in Part II. My favorite exchange of the episode was Lana and Archer discussing what Archer considers anonymous sex, which ends with Lana sayin, “Well, here’s some advice,” before punching ya boy in Klitschko’s and continuing, “do with that what you will.”

Again, just an OK episode of Archer Vice this week, but I imagine with the revolution coming to the palace, the crew will be more action oriented next week.