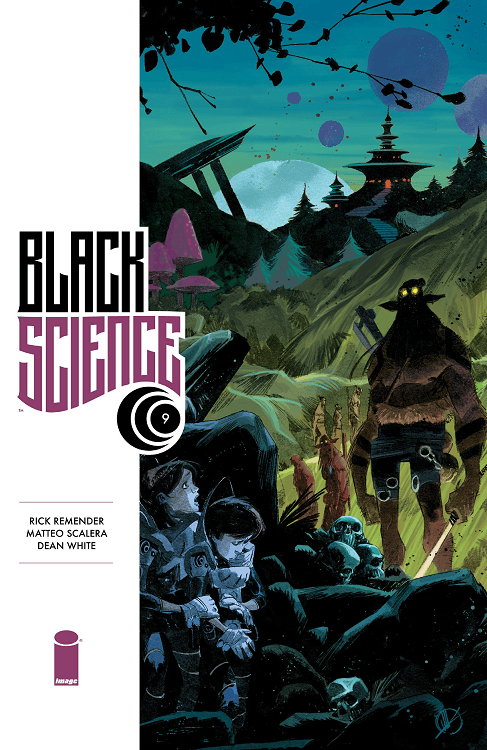 Black Science is back with a slightly different format than we’ve become accustomed to over the first 8 issues of this book with some mixed results. This is still a great book, but it always thrived on a singular action or narrative pushing from start to end in each issue. This particular one is split up among about three different narratives which does subtract from the adrenaline fueled perpetual chase that seems to come up in almost every issue…which doesn’t mean it isn’t there…we’ll get to that. The “Onion” as it were and the multiple dimensions are starting to reek havoc on the travelers and begins to explore if dreams are really subconscious constructs or realities from other dimensions where alternate histories play out. It really is a dizzying prospect, but Remender handles it well, by not overwhelming the moments but leaving plenty of room for further exploration of that theme.

The highlight was the last half of the issue, which is really difficult to talk about without giving spoilers on. I will say that is does have the chase motif we’re used to with some crazy action in a unique setting accompanied by possibly the best monologue that Remender has done on this book so far. Which says a ton. And yes, this is my monthly contribution to slobbering all over Scalera’s frantic and always moving pencils. I’m not sure who does action better than Scalera, but his style is always perfect for the kinetic movement of this book.

Another good installment of Black Science, even with the change in format and storytelling. Come for the consistent greatness of this title, stay for the big and satisfying reveal at the end. Black Science should STILL be on your pull list.