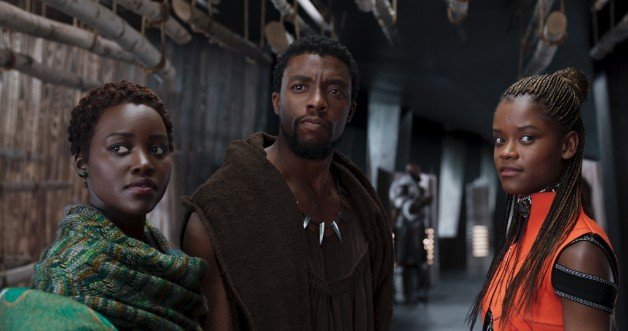 ‘Black Panther’ Review: Black Women are the Backbone of Wakanda

Black Panther Embraces Feminism While Addressing Wakanda's Xenophobia
3.2K Shares
In the parties where it be so packed
And the atmosphere be so Black- Mos Def

Black Panther has redefined what a superhero film can be. Just as Blade proved superhero films can be adapted to film successfully, Ryan Coogler’s directorial vision in Black Panther provides new routes for hero films where art can imitate life closer than ever. Every factor of this movie, from the writing and visuals, are tools for the cast and characters to explore and manipulate the world around them.

The film starts off Black as fuck from the jump. Forget what you’ve seen in the commercials because you’re not walking in with an idea where this script is headed, and the journey is all the better for that. (Shout out to The Lion King — you’ll know when you see it). Black Panther picks up a week after the events of Captain America: Civil War with the capture of Zemo. T’Challa (Chadwick Boseman) and General of the Dora Milaje, Okoye (Danai Gurira), bust a human trafficking ring to bring in their field operative, Nakia (Lupita Nyong’o). Nakia is T’Challa’s ex, and actually needed no help whatsoever in taking down this ring down. That point is made from jump. But T’Challa informs Nakia of his father T’Chaka’s (John Kani) passing. He is to be crowned King and he wants her to be there.

We’ve been introduced to the technology of Wakanda for a while, but actually seeing it up close and personal? None of y’all are ready. Everything is intricate, even the way their ships are piloted are ways we don’t comprehend. Okoye sits with her legs crossed and moves her hands in motions similar to Tom Cruise navigating the board on Minority Report, but even more intricately and calmly. You gotta see it to comprehend it. Wakanda looks gorgeous as soon as we see it, and it’s incredible to see a nation on this scale with a sense of how far advanced they are from the rest of the world. T’Challa is greeted by his moms, Queen Mother Ramonda (Angela Bassett), and his sister Shuri (Letitia Wright). The best interactions in this movie stem from T’Challa with his family and contemporaries, but the scene stealers are between him and Shuri. There’s chemistry with every character, but that chemistry between an older and younger sibling is something special as we see the cool older brother getting brought up to speed by his genius outside-the-box creative younger sister.

During Panther’s coronation, hosted by his advisor Zuri (Forest Whitaker), we see other tribes that make up the great nation of Wakanda. Five royal tribes to be exact, with one of those tribes led by M’Baku (Winston Duke) of the Jabari tribe. M’Baku has a few… words for T’Challa. Everything about the coronation and rituals of the Wakandans is flames, and I was searching the crowd for the best church hats and outfits because the costume designs by Ruth E. Carter are bright, vibrant, and completely bodying Afro-futurism. The movie moves forward once we see Erik Killmonger (Michael B. Jordan) and Lord, off the cuff, we see just how smart, militant, and cunning he is. You gon’ love it.

The best villain is a justified villain 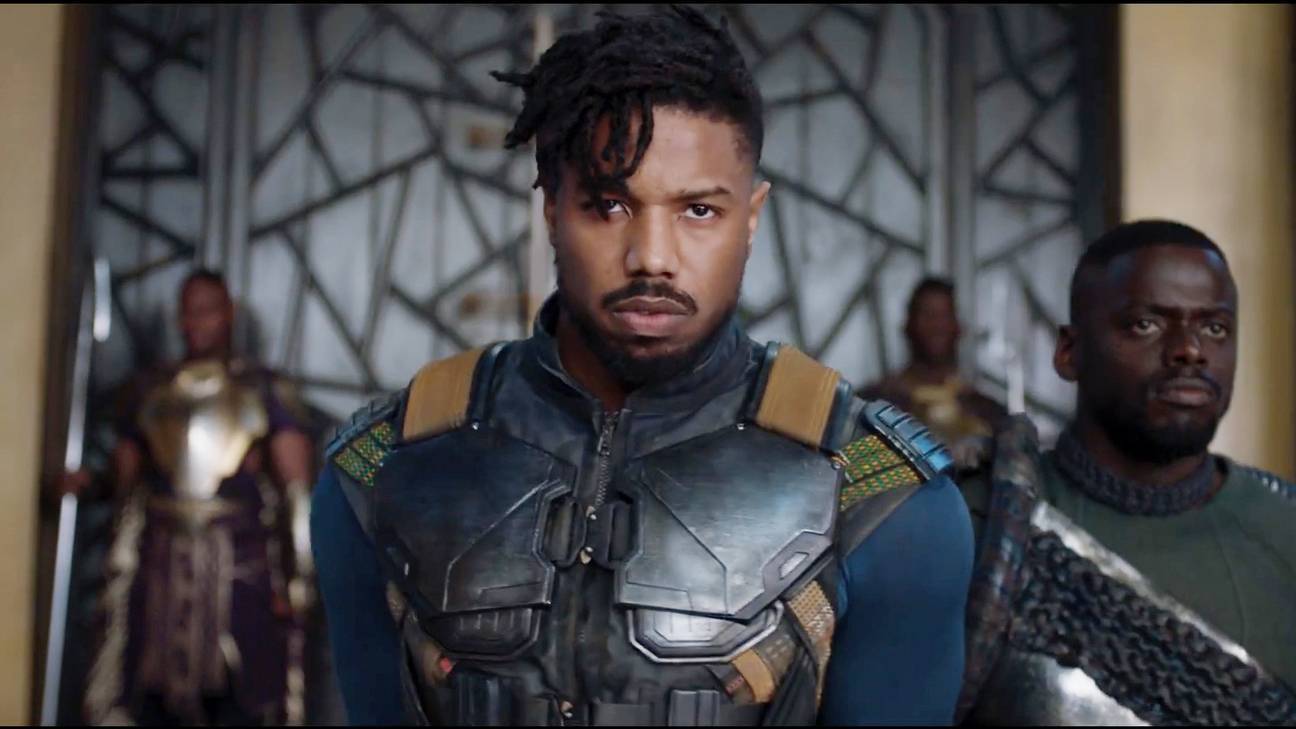 Killmonger tells no lies during his screen time, and it becomes very clear that Michael B. Jordan is the only actor who could encompass this character and be the antagonist to T’Challa. Killmonger is working unison with Klaw (Andy Serkis) to liberate an artifact that has ties to Wakanda. If you thought Klaw was a one-note villain, you’ll be surprised by Serkis’ performance. He is easily one of the most fun villains to watch in Marvel, especially with the animosity between he and Wakanda. Wakanda hates this guy, he’s their Paul Logan/Tomato Lotion (Tomi Lahren). T’Challa’s head of security, W’Kabi (Daniel Kaluuya), wants Klaw canceled like Big Bang Theory.

T’Challa’s pursuit of Klaw (with Okoye and Nakia) leads him to cross paths with Everett K. Ross (Martin Freeman). Freeman is the perfect Ross, and fans of Christopher Priest’s run will be able to recognize it instantly. It’s from here the movie takes off and does a complete 180. As we learn more of Eric Killmonger he becomes the best type of villain for T’Challa because he is a justified villain. That’s bad news for T’Challa. You can’t classify him as a bad guy entirely. There are so many levels Jordan brings to the role that when he finally has his face-to-face with Boseman their chemistry lights up the screen. They are the antitheses to one other. I’m 100 when I say Killmonger’s motives put him at the top of Marvel Cinematic Universe villains. Period. It’s between Killmonger and Hela. Das it. 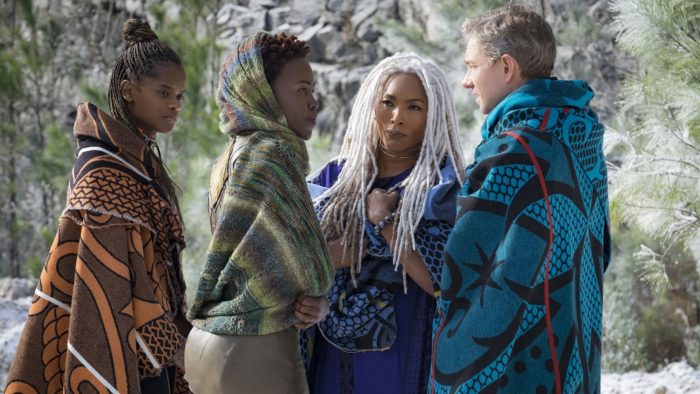 Black Panther‘s direction overall does so much for superhero films because being a hero doesn’t define T’Challa. T’Challa is a king — a king of a nation that happens to be quite xenophobic. Nakia expresses to T’Challa that Wakanda could do more for the world. They could lead, but we see those who would rather keep to themselves in order to survive the world coming to take from them (because the world takes, especially from Black folk.) One person of the council states that if Wakanda lets in refugees then they’ll be bringing their troubles into Wakanda. Sound familiar?

Black Panther addresses the question of what actions Wakanda could have done to prevent other Black people who weren’t fortunate enough to have been born there from being enslaved. Our perception of Wakanda changes from this majestic oasis to a closer look at the foundation of choices that keep it that way. That is one hard ass look. Killmonger poses the point: don’t all (Black) people stem from Wakanda? Isn’t that enough for Wakanda to help them? T’Challa responds with, “I’m not the king of all people. I am the king of Wakanda.” There are no punches pulled in this movie, man. Zero. There are plenty of ideologies to decide on though, and those are what lay at the heart of this movie. Also, shout out to Xhosa being the language of Wakanda. 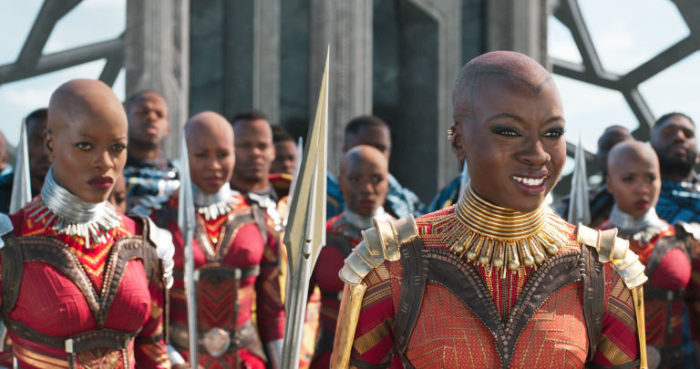 Ultimately, Black women are the backbone of Black Panther. Period. Lemme say it again: Black women — dark-skinned Black women, so you know it’s real — are the backbone of this film. Okoye keeps it real with T’Challa entirely. She feels like a protective older sister that knows T’Challa better them himself, especially when Nakia is involved. Plus, she is her own character and can throw hands. Then there’s Shuri, a genius, who is young and entrusted entirely with leading Wakanda’s technological future. She’s playful with T’Challa and gives him the tools he needs to survive while having her own shit going on, too. Plus, she’s her own character and can bust them Vibranium canons. And finally, Nakia. MF’in Nakia. Nakia is out here: she’s a spy, has her own ideas and beliefs that she adheres to, and she doesn’t waver. Plus, (you guessed it) she’s her own character who can throw not only hands, but her size 7.5 heels, too.

Black Panther is not the same movie if you take away any of these women. These characters and the Dora Milaje are the bedrock of this film. Everyone has their own business and in their own way must deal with the question of being loyal to Wakanda and its traditions. It’s incredible to see this struggle from women in a film. Black women struggling with love, loyalty, and tradition to a Black nation that loves them back. *Stares at camera in the key of “where else you gon’ get this real?”* 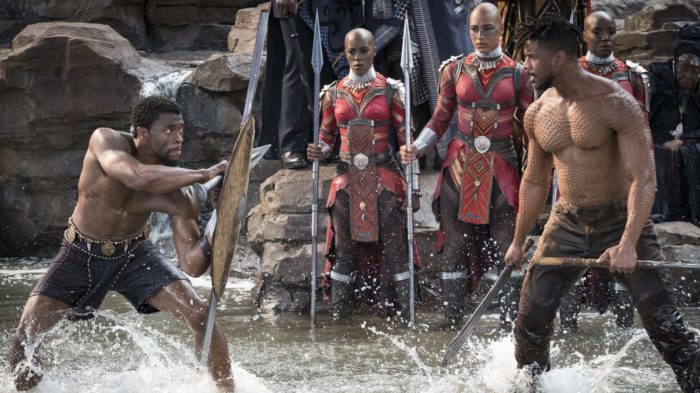 Black Panther has to be the hardest movie Marvel yet as it deviates from the traditional superhero formula. Chadwick Boseman really gets to flex the character of T’Challa: we’ve seen him being a stern man on the mission in Captain America: Civil War, and here we see more of his humanity. We see him laugh, freeze up, show empathy for friends, love of those around him, and cherish his country. T’Challa is most human and well-rounded in this film. Joe Robert Cole and Ryan Coogler need all the awards for co-writing the screenplay for this film. Nothing in the dialogue was campy or cheesy, and the characters were regal, humorous, and gutter at all the right times.