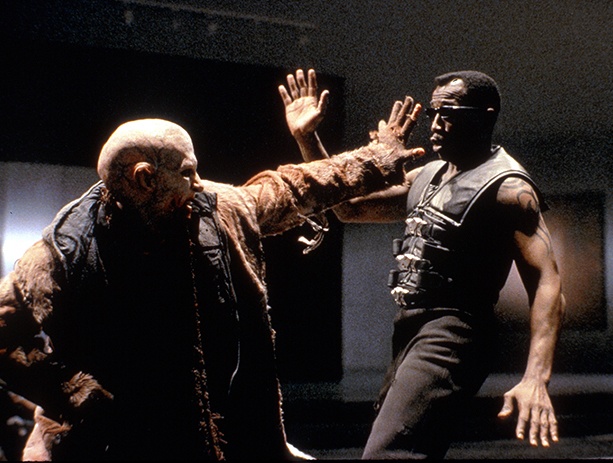 Blade is the reason Superhero movies are the new spaghetti western. Tell me I’m wrong, look me in the windows of my soul and tell me differently. Iron Man had to get Blade’s blessing before ushering in the Marvel Cinematic Universe. *Allen Iverson voice* I mean we talking ’bout Blade? Blaaaaade? Wesley Snipes’ Blade series, my vampire? Blade is proof that comic book characters could turn in successful film adaptations on the big screen. Blade II however, *wipes tear away* Blade II is scientific proof that there’s only one way to beat a room full of henchmen’s ass.

I done seen some fight scenes in my day but a room full of Edward Cullens getting the stakes beat off’em? Where they do that at? I ain’t ever seen grown ass vampires get defanged on screen before. If you’ve never seen this fight scene it is a must. I just wanna go John Madden on some of the highlights. *Rubs hands together*

No Henchmen’s ass was safe in Blade II

Oh Shit! Suuuuupeeeer ki– gawt daaaamn– Y’alll see that kick?!
Blade kicked dude so hard he Fruit Roll up’d himself.
How you kick a man so hard he lands Tony Hawk’s 900?
Fam went over the rail like a spilled drink.
Listen, if you ever get Superkicked so hard that it makes you Simone Biles in the air,
you need a new line of work. Security is not for you.

Dude ran right into a fucking hip toss like he was in the Royal Rumble.
How you catch the hip toss into obscurity
and get the just for good measure no look back kick.
If you hip toss a man you can at least look at him
before or while kicking him while he’s down, pfffft, not Blade.

Can we talk about how Blade’ll never be a licensed chiropractor?
You see him Jenga two dude’s necks one after the other?
Blade caught’em in Finn Balor’s sling blade
before finishing’em off like Billy Bob Thorton in Sling Blade.
Blade blowing necks and backs out on some boxspring mattress shit.

Blade adjusting folk vertebrae like it’s an antenna not picking up reception.
How he snap into a dude’s neck on some Slim Jim shit
before UPS overnight’ing another SUUUUPERKIIIICK.
Blade Superkicked dude so hard I thought he was one of the paintings on the wall.
Dude went into the air like Rick James when Charlie Murphy kicked’em.

Hold this L for me right quick

Blade nailed these dudes with all of Nightwing’s combos from Injustice
then hit the drum break down from Phil Collins’ “In The Air Tonight”
all over that guy’s chest.

You on some other shit when you jam a baton in someone’s face
Blade plugged that shit in dude’s face like it was a USB port.
Dude took a phone charger straight to the face.
It’s safe to say everybody in this scene probably shit themselves on this fade.

This the most disrespectful shit I ever seen

BLADE DEAD ASS STALLING SUPLEXED HENCHMEN #35 JUST FOR THE FUCK OF IT.
Who fucking suplexes a man just to prove a point in a fight?!
Blade held that suplex before coming down with it so it’d hurt more.
There must have been a time traveler in the audience cause
somebody shouted “World Star”at this in 2002
and WorldStarHiphop wasn’t founded until 2005.

That man’s spine got turned into Vermont imported jam.
That man’s spine can be used for double dutch jump rope now.
Dude’s spine looking like angel hair pasta with the lobster sauce.
You’re favorite hero could never take disrespect to these heights!

Now we could end this highlight reel right here with the hero being triumphant and taking a win. Blade II don’t get down like that. Blade came back for this sequel to give us a Wrestlemania level final boss battle and oh my god did he deliver. Nomak put all of the hands all over Blade. Blade took his L’s with the utmost dignity. My man dove after Nomak with the Link, Down + A, Smash attack and a Van Daminator. Nomak said, word? Let’s get it then.

Nomak goin’ give it to ya


Fam, you see the spins before the fake out?!
Nomak gave’m Kristie Yamaguchi finesse with the spins
before hitting him with that good night right hook.

That fake out may as well have been the “Expose him! EXPOSE HIM” crossover
Blade got the And 1 hot sauce fake out before
that red eye flight to “Fuck you thought this was?”
Blade’s face got tsunami waves from the impact, man.
How you hit a man so hard his face get
ripples on it like ya fist was a skipping stone?

What that health insurance do?

Nomak got his arm broken then Affordable Health Care Acted
that shit back together like it was nothing.
Nomak legit said “pop, lock, and drop it” to his arm and was good to go.
Dude, Nomak didn’t even need Robitussin for that break.
Nomak must have had a mom that put the fear of god in’em
if he ever broke something and she had to take’em to the hospital.


Gawt Daym, Nomak sent Blade’s ass out like a bell hop with that kick.
The worse part is the fucking set up for the superkick
he got that Shawn Michaels tuning up the band distance for it.
Blade was having a superkick party earlier, he caught a mean one
and was like “Damn, is this what I been doing to people?”

Blade hit the elevator so hard it crumpled
like the aluminum foil a Nestle’s Crunch is wrapped in.
Elevator folded in on itself like a politician promising tax cuts for the middle class.
Elevator looking like hope post student loans debits.

I ain’t ever seen a hero get the Super Mario Smash Bros toss.
Bruv got caught in the Cesaro swing.
Nomak Merry-Go-Round’d Blade and things were never the same.
The swing is bad enough but Blade’s head colliding with a column
is that extra insult to injury. Hurts more.
Nomak bounced Blade’s head off the wall like a stress ball.
Name the last time you saw a villain hammer throw a hero
like he trying to qualify for the Olympics?

Did this MF’er just climb the top rope?!

Nomak hit Blade with Kairi Sane elbow, landed,
and gave’em two more elbows of equal force to the first.
I let out a Ric Flair “Wooooo” watching this shit.
I love Blade but this is Summer Jam screen worthy right here.
This shit needs to be a highlight on ESPN Sportscenter.

Look at the height! My man took it to gravity to drive home the point.
Do you have any idea how many fucks you have to not give
to deliver the fade in the form of a fucking elbow drop? Legend.
Nomak is a fucking legendary villain off the strength,
off the fucking strength of these bows alone *Standing ovation*

This is how you fucking beef!

First and foremost, if a hero and villain ain’t beefin’ like Blade and Nomak, then they fucking failed the hero movie genre. Look at that gif. Don’t look at these words, look at that fucking last gif. That’s the definition of beef-on-sight. Dare I say, peak beef. Grade A, grass-fed and imported from Portlandia, beef. What Solange’s size sevens said to Jay in the elevator, beef. What 2008 Kanye said to George W. Bush, beef. Stand the test of time, beef. “Et tu, Brute?”, beef. Judas selling out Jesus, beef. Drank thrown in somebody’s face so you know it’s real, beef. Take out from Arbys beef my guy.

*wipes sweat off forehead* It’s been sixteen years and no Marvel or DC movie has come close to embarrassing cats on hand to hand game like Blade. I already got a petition to get these ass whoopings from Blade in Blade II donated to the Smithsonian’s National Museum of African American History and Culture. I want these fades on the curriculum to be covered for Black History Month in schools. These fades deserve to be studied in a lecture hall for throwings hands 101. In the list of things to never forget,