I doubted it too, B. I was just as skeptical as yo’ Sasuke and Sakura shipping ass. I waited weeks before checking out this new Boruto series, figuring I’d be unimpressed with the pace and action then drop the show before it got its wings. First couple episodes were decent, so my boy and I decided to really wait it out a few months and in July, got to binging.

It was a hell of a move, because we just caught up this week and there literally could not have been better timing to finally be watching a new episode the week it premiered. Why? Because this latest episode was the jaw-dropping, body bag counting, jutsu snatchin’ episode this generation of Konoha fans deserved! It also served as the highly impressive final episode in Boruto’s introduction arc. 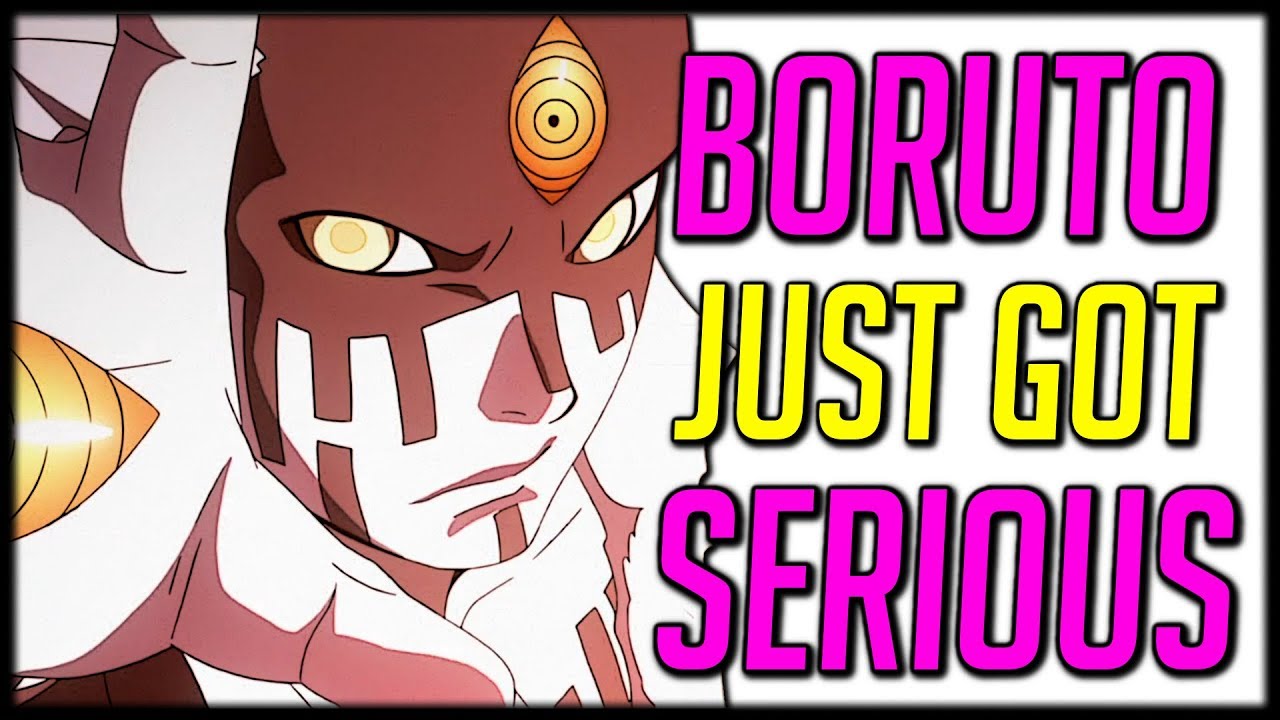 Aight so you know Kaguya, the evil Rinne Sharingan havin’ moon woman who wound up being the ultimate villain by trying to sap all Ninjas of their chakra at the end of Naruto Shippuden? Yeah, well she had homies. The whole Otsutsuki clan to be exact, and they coming for all the tailed beasts to use as pill supplements to live forever aka fountain of youth roids.

The Chunin exams are goin’ down and all the young bucks is flexin’ for the old heads that we all grew to love. The exams come to an end, mad dramatic and shit (for reasons I won’t get into), but as soon as Naruto has to hop out the Kage booth, the three remaining Otsutsuki clan members come outta nowhere dropping wild jutsu bombs over Baghdad! Sasuke steps up to handle the big one and your Kunoichi, Sakura, don’t miss a step in protecting the villagers.

The leader pops some pills and sends one of the most devastating looking black energy masses at everyone scrambling for their lives. So, Naruto had to flex on these mufuckas and show the village why he the truth. He protects everyone but gets kidnapped in the process.

Did I mention that these ashy-ass-jutsu stealing celestial beings were nasty with the Taijutsu hands, Rinnegan prowess, and Byakugan beast skills? Let me put you on.

Kinshiki Otsutsuki: The muscle of the clan and adopted father figure of the Otsutsuki leader, Momoshiki. Homeboy sucks up any and all jutsu thrown his way and stores it in a sort of gourd. When he’s ready to pop off, he converts the stolen chakra into the deadliest of light saber looking chakra weapons. Don’t sleep on the speed either. He may be big but homeboy is fast as hell.

Urashiki Otsutsuki: The intel gathering, laid back scout of the clan. He seems pretty weak, being that he tiptoes around and throws a rod and hook into Ninja’s bodies, stealing their chakra and jutsu but don’t let his teleporting, sneaky nature fool you. He easily took down (and imprisoned for 10,000 years) a member of his clan who betrayed them and held his own against two of the Kage, Gaara and Chōjūrō, at once. 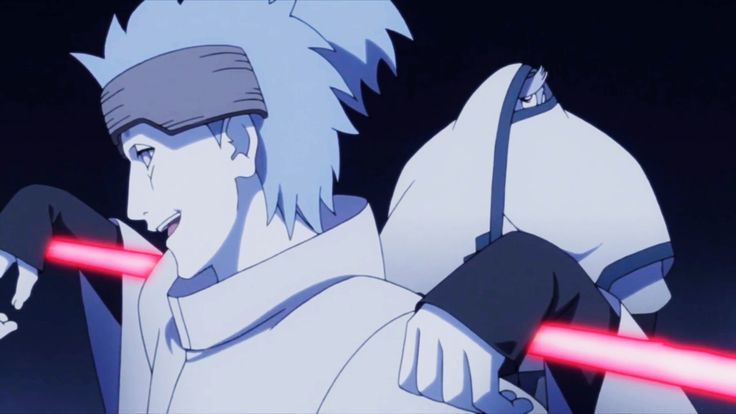 Master Momoshiki Otsutsuki: This guy is like the King Kirby of the gang. He uses red Rinnegan eyes embedded in each hand to absorb all jutsu thrown at him and sends it back even more powerful. He’s also pretty fuckin sick with the combat skills. He’s one of those high and mighty villains who thinks his enemies (Ninjas in this case) are insignificant vermin to be extinguished on his way to collecting and downing chakra pills that preserve his youthful essence. He’s come to Earth to finish what Kaguya started decades earlier.

The stage is set now. These Otsutsuki bastards done kidnapped Naruto to the Otsutsuki ice dimension. So, Sasuke basically yells “YERRRR” and the badest ninjas in the land appear like, WE OUT. The four remaining Kage, Sasuke, and Boruto (who’s about to learn what it really means to be a ninja) squad up and roll out through Sasuke’s Rinnegan portal. Kurotsuchi the Tsuchikage, Darui the Raikage, Chōjūrō the Mizukage, Gaara the Kazekage, Sasuke, and Boruto all arrive like fuckin Fortnite warriors cascading into the battlefield! Fam, I wasn’t ready for the realness that was about to go down! The 4 Kage and Sasuke start off with Kinshiki while Boruto frees pop dukes, and they reunite. I was impressed that they actually worked together like a real team to get Kinshiki to drop his guard before capturing him kinda breezy, with the help of Kurotsuchi’s lava style imprisonment.

Out of desperation, this unforgivable ass cretin, Momoshiki eats his brethren then transforms into Blanka’s demonic cousin and flexes off the rip causing an energy shockwave that slices the God Tree clean in two. Sasuke tried to cut the nape of his neck like Attack on Titan, failed and was straight up like, “This is bad.” Homie out here with the new purple Rinnegan on his hands and YELLOW Rinne in his forehead like, “WHO WANT THE STATIC?”! I’m on the edge of my seat dumbfounded like what kind of Cyclops x Star Brand hybrid savagery is this?! He musta let the ghost of Madara compel him, because he immediately starts to beat the brakes off all 4 Kage and put them to shame.

Bloaw!! Liu Kang dropkick to Darui’s chest, sending the Raikage into the tree stump, splinters flying while he all immobilized and barely breathing. Gaara aka Mr. “Dammm homie, in high school you was the man homie, fuck happened to you?” hit him with the sand trap but homeboy got tricks up his sleeves for days and goes all Willow Smith meets Mortal Kombat Sindel with the hair whip jutsu before giving Gaara the forearm sentencing smackdown! How you taking cats out with forearm hits tho?! Chōjūrō out here worrying about the Kazekage when he should be worried about the tree root he just became apart of. Kurotsuchi tries to deliver a blow with the igneous rock Thing super punch, and is dealt with quickly, leaving our dynamic duo to see what this bum is really made of.

Naruto’s up first. He tests Momoshiki’s hand to hand skills, and noooo…Naruto wasn’t ready! That man hit him with the left block, right block, ya! Ha! Chaaaa!! Gentle fist Gale palm to Naruto chest just so he knows it’s real. He snatched the Hokage up like a rag doll and Sasuke came in for the sword work, but Momoshiki pivoted and on some Matrix shit and had both these cats dangling off the ground like angel hair pasta. Then he had the audacity to go full Kirby in Smash Bros mode by lifting them dozens of feet into the air and choke slamming the shit outta them boys, leveling the ground.

Naruto and Sasuke realize they gotta come harder than that son and fly in for the electrified slash and fiery punch that would’ve ended the life of any other shinobi, but Momoshiki caught the simultaneous blows in splendid fashion, you already know what that means! Six Paths Sage mode for Naruto and that Eternal Mangekyō Sharingan & Rinnegan clapback session for the Uchiha clansman!

Them boys go for it all and start whoopin’ that celestial being ass! He can’t handle the greatest tag team in Ninja history! They clap him with a couple of 2 piece combos with biscuits and gravy. Sasuke out in another dimension DOIN THE MOST catching swords with his feet and shooting katana daggers at this cat! Once they have him on the ropes, Sasuke whips out that ol’ Fuma Shuriken (Shadow Windmill if you nasty) throwwwwbaaackkkkk and tosses that bad boy thru Naruto, multiplying it by the hundreds! After he dodges all 8,000, one pops up from the dirt like Diglett, substituting back to Naruto as he launches a Rasen Shuriken Fatality for the ages!

Of course, Momo (I’m just gonna call him that now) planned to absorb it, so Sasuke substitutes for the attack hurling midair. Momo, thinking he’s slick, catches him with a chakra chain, but Sasuke uses his visual prowess to swap bodies with him, leaving Momo all wrapped up, waitin’ for Naruto to deliver a One Punch Man right hook from hell! Dude goes soaring through the God Tree stump then Sasuke comes through with the almighty PUSH planetary devastation!!

This guy was so mad that such insulate creatures put the mean hurt on him cuz. Momo burrowed outta that planetary devastation with ease then comes back with every ounce of his strength ready to exterminate dem boys. He unleashes a beast mode wood style dragon attack, injuring Sasuke, so it’s all or nothing from here on out. Kurama comes out to play just as Momo transforms himself into a living, breathing, lava-rock Marshmallow Man x Godzilla creature. Sasuke lends his Susanoo power to samurai armor up the demon fox as Momo unleashes a mammoth punch, but Naruto bobs and weaves before slicing his body in half, ending Momoshiki’s superiority complex and showing Boruto how the big boys play ninja.

A few more tantalizing things go down before the Otsutsuki clan leader is truly defeated, but in the name of “gotta see it to believe it,” I’ll refrain from spoiling the very end of this God Tier episode. So many great moments. An amazing couple of minutes between Boruto and his father who he’s despised for years. The heartstrings were getting tugged on something severe when Sasuke lent Naruto his power. Then that amazing final scene (go watch that shit NOW) that shows the ultimate maturation of Boruto, only to be followed by a chilling quote from Momoshiki that will haunt us until we finally see it come to fruition.

“Those blue eyes of yours will one day take everything from you.”