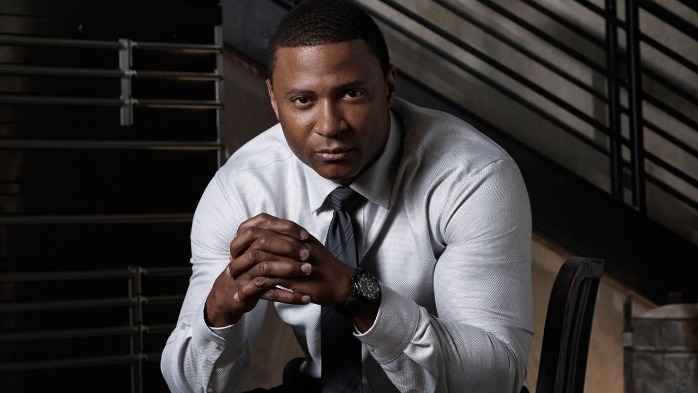 [dropcap1]T[/dropcap1]hree seasons into Arrow we’ve seen Felicity Smoak turn MVP, Roy Harper’s evolution into Arsenal, and Sarah Lance die, become a hero, and die again. We even saw the rebirth of Thea Queen when her hair went Legend of Korra, Book 4 and she morphed into fierce-Thea over a summer abroad. In the time it took you to learn the 3-man weave at basketball camp, Thea learned to turn off physical pain and sword fight trained assassins. How unaccomplished does that make you feel? Now take all those feelings of ineptitude and multiply them by 55 episodes, and you might have an idea how John Diggle feels.

[divider type=”space_thin”]
Diggle began as a promising character of color in the series, asserting himself as someone uninterested in “being anyone’s sidekick.” A 40-something year old ex-Special Forces with hero-diesel build? And he says he’s no one’s sidekick? Arrow had me going on that one. They had me going, that is, until it took under half a season for him to become just that. Not even a particularly useful one either – whenever Ollie excludes him on missions he sits back at headquarters and dreams of being appreciated. “Maybe I’ll get a code name soon,” he thinks to himself, looking up at the salmon ladder. “Or a mask. A mask would do.” It’s embarrassing. On the list of respectable sidekicks, John Diggle’s name falls somewhere under Kimmy Gibbler, Memphis Bleek, and Tails.

He’s strictly there for diversity purposes at this point – they couldn’t get rid of him so they turned him into Cole from Martin, where every time he talks about his job for a mission everyone yells “you ain’t got no job!” His presence onscreen solely to say things like “You’re not seeing straight on this one, Ollie” every 18 minutes. The frustrating part is his character had such promise at the start of the show, although let’s be clear – he was never written as Ollie’s equal even in season 1, and the way he was the punch line of Ollie’s daily shenanigans sneaking away in season 1 while Diggle facepalms and says “aw, shucks” was borderline offensive. Heaven forbid we break with the norm and have an interesting black character that helps Ollie out as an equal. He was always the goofy and hapless counterpart opposite Ollie’s hero-ness, but essential enough to each mission to keep us believing in his utility on the team. 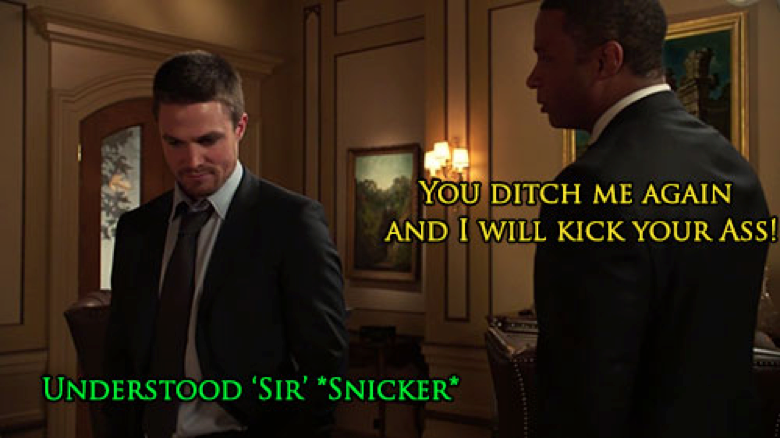 [divider type=”space_thin”]
By the second season the writing staff of Team Arrow just stopped trying. They rolled dice on who would get the remainder of his hero time and Arsenal was the clear winner. When the main dude from The OC moves up the ladder in Team Arrow faster than you did, and starts getting individual missions while you get hard sticks and bubblegum, you have to consider talking to Human Resources. Nothing against Roy Harper, but I find myself resenting everything he’s been given. Arsenal has a codename, mask, compound bow, and the business license for red hoodies. Catch cats rolling through the Glades in a red hoodie without paying Roy Harper royalties? Not in this city. Dude even gets the stand-up mannequin for his uniform!

And Diggle gets what, a handgun Ollie probably made him pay for himself? Diggle asked Ollie off-camera if he could finance a legit hero weapon and Ollie was like “You knowwww, things been tight since this whole Ray Palmer thing. Maybe if you asked back in Season 2? But listen, wait till I get my money right.” Then had the nerve to tell him to ask Kim Brown, like “Weren’t you in the Special Forces? Don’t you guys get a membership discount on that stuff? And your wife, she was married to that guy in The Unit, right? And now she’s with A.R.G.U.S., I mean, wow, I should be asking you for weapons, am I right?”

Diggle tried to object the way he always does, like “You’re not thinking clearly on this one, Oliver,” and Ollie looked at him like “Is that all you know how to say?” Diggle shrugged, nodded, and said “Yeah that’s all they give me.” Ollie muttered “That’s rough,” and walked away to have sex with his twelfth woman of the series.

I understand Arsenal was going to happen, and I understand they don’t want to divide screen time between so many characters. What I don’t understand is having the character of John Diggle as the most thinly veiled substitution for diversity this side of Starling City. I’m going to pitch my own TV pilot, but in my show we’ll have the white dude sit at basecamp looking worried as a strong black man succeeds in fighting crime with his younger, also black sidekick. Maybe it’ll be picked up as a Netflix original series.


[divider type=”space_thin”]
I remember the episode when Thea was kidnapped and Roy, probably high on that stuff, was like “Oliver is making the wrong calls, I’m out!” Diggle damn near flinched at the mention, like “Don’t you dare talk about him that way! Let’s wait and see what he wants us to do! Now pick up that broom Felicity, you know Ollie don’t like a mess.” When did they turn him into Samuel L. Jackson in Django? Funny thing is, we don’t have to look far to find thoughtful diversity and character bending. It’s right there on the same network, with the same show creators, on a short train-ride away to Central City. In The Flash, Iris and Joe are an African American cast of 3-dimensional characters who have actual purpose. They are integral to the plot, and influence and motivate Barry. Add a witty Colombian nerd and female science whiz and you have a team at Star Labs whose writers look like they were present the day they were scheduled to discuss representation. The inexplicable differences between the show were even more glaring during the crossover event, where 100% of Diggle’s lines were Aziz Ansari’s depiction of black guys reacting to magic. Barry runs away to save lives and Diggle reevaluates the meaning of life.
[divider type=”space_thin”]
I don’t know if Diggle can be saved, but the old adage says, “If you love something, let it go,” and I love John Diggle enough to plead they release him from Team Arrow. Use him or lose him, but don’t leave him in this purgatory of faux utility and one-liners. Give him a mission. Give him a goal. Or at least give the man a mask?