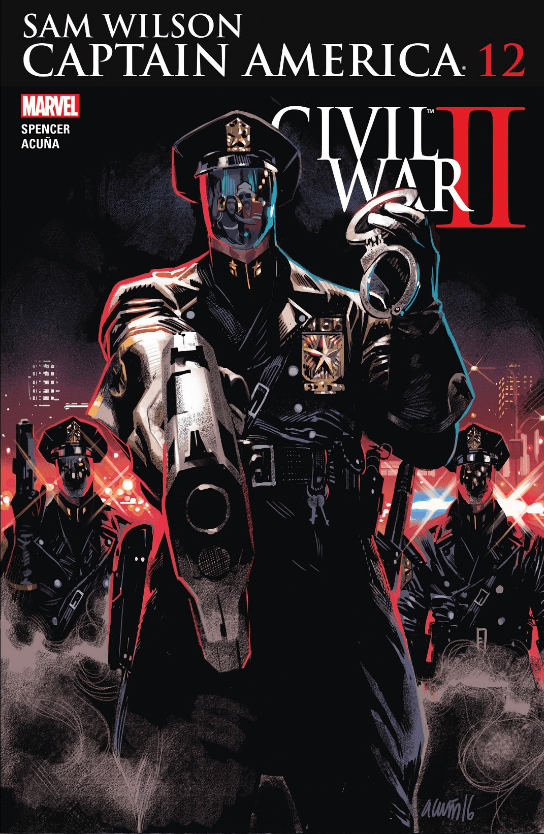 The issue starts off with a flashback to Steve Rogers walking into a police precinct asking to see a prisoner. Was he visiting someone he locked away? Nope. He was coming to get Sam released from jail, again, because a racist police officer assumed the costumed person of color just had to be the villain while he was actually trying to stop a robbery. Sam blows it off as just another day of the same routine as Steve tries to apologize on behalf of white people everywhere. I haven’t read enough old issues of Captain America, but from what I have, it’s not hard to imagine this being a recurring part of their lives.

Nick Spencer has done an impeccable job of examining different social justice issues currently plaguing America. His antagonists are evil rich white men with far-right, conservative leanings and their method of exhibiting their power comes in the form of an elite, abusive police force call the Americops as they’re literally on the verge of throwing blows with a character that embodies black rage. I’d say you can’t write stuff this good but that’s clearly what’s happening here. 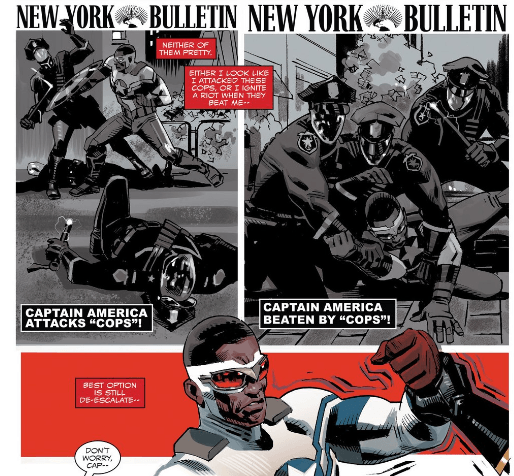 Earlier in my reviews of this run, I commented that Spencer’s version of Sam Wilson reminded me a lot of President Barack Obama. Now that we’ve had more time with him, I see that he’s much more than that. He’s every black person that’s ever had to think about where they fall in the battle of injustice. He’s every one that’s been given power and had it stripped away. Which, eventually, boils down to practically every minority in America.

The imagery of Sam Wilson, no, Captain America, picturing two very real possibilities of either laying on the ground as he gets beaten by super-cops, or, taking the nuclear heat from the public after defending himself against them, makes the issues Spencer is touching on all the more real.

This current run of Captain America: Sam Wilson is going to end up on the syllabus of a really liberal, young-minded sociology professor one day.