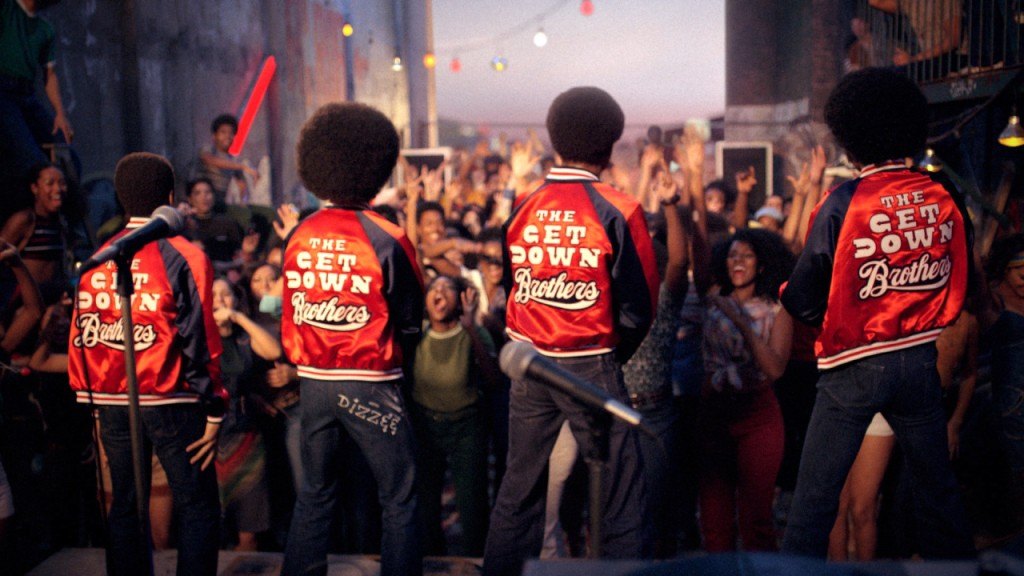 682 Shares
“I walk pass with a nod and a reminisce /
Swear to god hip hop and comic books was my genesis”- Atmosphere
*No radio edit on spoilers here. Only read if you finished the series*

Sun, you know a show is going to be good when your mans/womans/nonbinarys and dem keeps asking if you seen it and to contact them no matter the hour as soon as you do. That’s how Editor Will Evans was telling me about The Get Down, explaining how the story is vivid and moves like a comic book. He wasn’t lying — as soon as I turned it on we’re taking to ’96 era hip-hop with a grown Zeke giving us the foreshadowing to the journey we’re here for. What we see unravel is Zeke and his friends'(Dizzee, Ra-Ra, and Boo-Boo) introduction to the underground world of hip-hop through the enigmatic Shaolin Fantastic.

The Get Down does an incredible job of creating the lore of the beginnings of hip-hop. Much like how Middle Earth is filled with a vast history in Lord of the Rings and The Hobbit, we start out on the ground floor for the world building hip-hop as its own entity. This entity is given life by the five elements of hip-hop: graffiti, emcees, BBoys, DJ’s, and knowledge. We see at least one or more element represented in each character, Dizzee (graffiti, knowledge), Zeke (Emcee, knowledge), Ra-Ra (knowledge), Boo-Boo (BBoy) and Shaolin Fantastic embodies more of the elements (DJ, BBoy, knowledge, graffiti) as he is a direct product of it. The beautiful thing is that although they aren’t official elements The Get Down has nerd culture and martial arts noted as honorary elements in how it romanticizes hip-hop’s prelude.

Shaolin is the perfect example of the bridge for martial arts and kung-fu films to influence hip-hop. He himself is first described as this mysterious figure, navigating through the ruins of the Bronx smooth as a shadow as he tags his terrain. [quote_simple]“His hands are samurai swords, and his pieces they’re all fireworks, big, bright explosive.”[/quote_simple] The dude is described damn near like a playable character from Tekken, Bushido Blade, or Samruai Showdown. Once we saw the Bruce Lee belt buckle we knew it was a wrap. You knew Shaolin was all about Martial Arts films and I don’t have to tell you how hard the hood fux with Bruce Lee.

Not only was Bruce Lee an icon for black Americans in his heyday, but a generation later we still love him. He’s a legend.

Shaolin Fantastic appears straight up over the top like he is straight out of a comic book (get it?) or a Kung Fu film. We see him navigate through the Bronx like water, owning and overtaking every obstacle in his path as he parkours through the hood to tag. The only thing missing is him running with his arms behind him Naruto style. When Shao encounters Zeke with his friends (“Argh, this mutha fucka with the fake karate”-Zeke) he’s doing the most with a flare for the extra, while dripping candy paint bravado and confidence as he slides down the rock on some Robin Goodfellow shit. Everyone is more “what the fuck” than impressed until they see his Shao007 tag and realize he’s the legendary Shaolin Fantastic.

As much of the ninja qualities that Shaolin exhibits with his stealth and cunning as well as his misogynistic interactions with women, the most humble we see him is when he is in the presence of Grandmaster Flash. It’s here that we see the honor in Shaolin Fantastic and where his demeanor switches to that of a samurai following the code of bushido toward Flash and Hip-Hop. Grandmaster Flash is Shaolin’s retainer/shogun, we see it in how he trains him, refers to him as grasshopper, and sends him on missions to prepare him to become a DJ. All these tasks he’s given, like finding a wordsmith to complete his ascending, are elements straight out of a Kung Fu flick. How to find the get down, how to train on the turntables so he becomes one with them? That’s my shit right there.

I’m watching all these homages unfold shouting “yo” in different languages, man. When Shaolin found out he got banned and became a ronin? Yo! When he was trying to make amends to regain his honor? Yoh! When he copped the Zatoichi sword cane man? Yosh! Even in seeing them cross over into Kool Herc’s territory and seeing how vastly different of a shogun he is from Grandmaster Flash in his mannerisms and the way he talks; where Flash is more prone to riddles and rhetorical questions to make his students realize the answer, we get a more zen and slow approach with Kool Herc. I love this shit, man. The boroughs represented as different lands all run by crews? The armies amassing and those trying to make name for themselves? The Get Down is The Warriors meets The Kid With The Golden Arms with Rakim waiting to do the score. 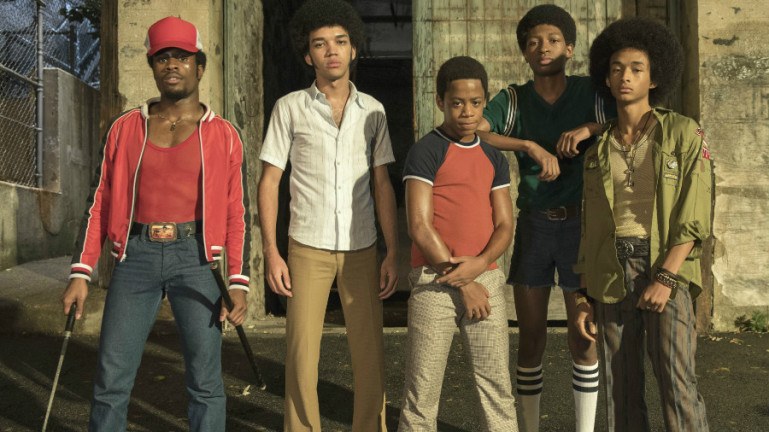 We understand that hip-hop has its own code of conduct and honor in this romanticization, however, Mylene doesn’t see that (at first). Mylene represents the old guard of Disco. Let’s call that her shogun and she is a full-on samurai for its way. She doesn’t see Shaolin Fantastic as a samurai of hip-hop, or hip-hop as an entity. Mylene just sees him as the ninja, a thief in the night running lawless having no regard for the shogun she serves as he calls the singing “wack” and only uses it for “The Get Down” portion of a record. This is the old and new eras at war with one another holding to vastly different ideologies. Where Mylene by the end has not warmed up to Shaolin, we see her respect Zeke’s passion for hip-hop as his retainer. We also see Shaolin Fantastic living between two worlds as a samurai for hip-hop under Grandmaster Flash and the lawless life of a ninja in the underworld run by Fat Annie. Shao has been living between both lives but Grand Master Flash tells him he’ll have to give his all to hip-hop if he wants truly wants to become a DJ.

Now if Shaolin is the bridge between hip-hop and Kung Fu flicks then the bridge for nerd element is Ra-Ra. *rolls up sleeves* Y’all bout to hear me talk my shit ’cause I fucks with Ra-Ra. I was shouting to Mufasa as he stared at the Judo Master poster on Shao’s wall. My man got that nerd life tatted across the belly. 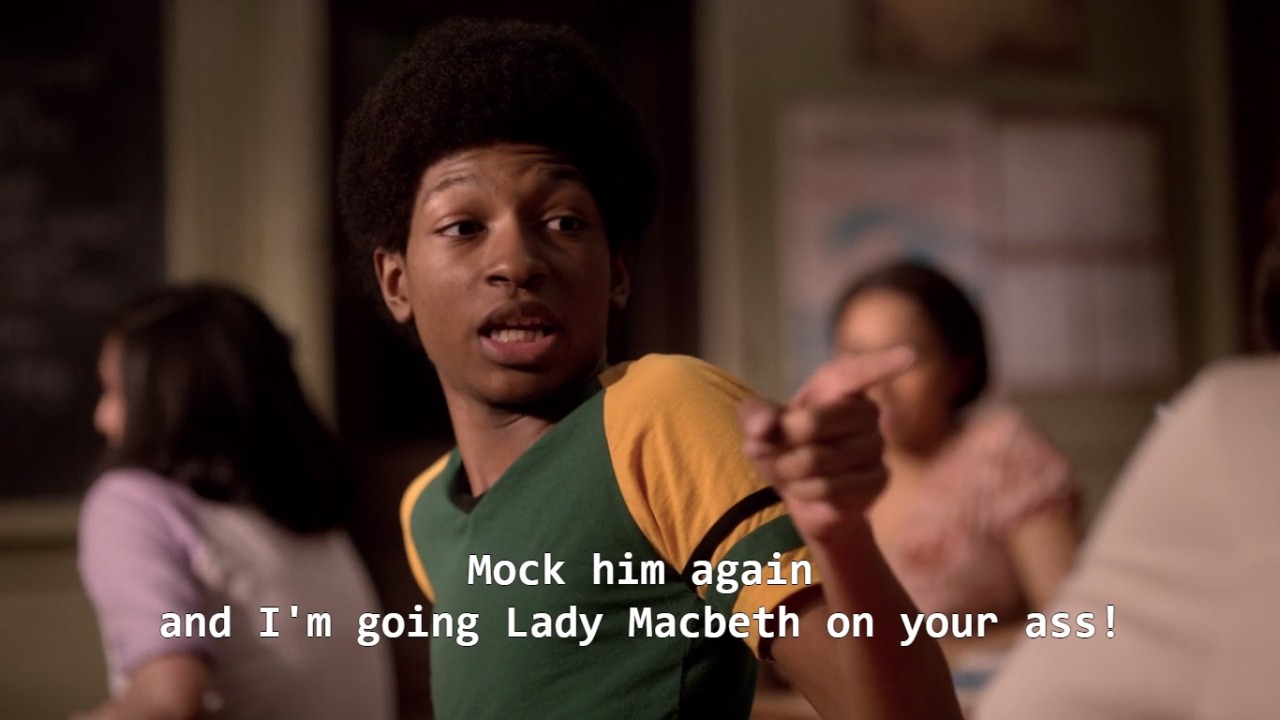 You see how hard he rides for Star Wars? I roll the 12 side for Ra-Ra 24/7. Ra-Ra stay with a comic book in his hand too! There’s so much superhero jargon and references being throw around. This was on behalf of most of the group, but a great majority of this came from Ra-Ra. He is that friend who can find a way to give you great advice, make a joke, or find a correlation to whatever is being talked about through comic books or pop culture. Fucking with comics made this dude rather mature in the advice he gives to Zeke in not allowing his friendship with Mylene to pass just because she wanted to remain friends and needed his help. We see him flourish with knowledge until the homie is like Shikamaru Nara as he constantly thinks steps ahead of everyone else.

He’s most identifiable as the nerd where we see him helping others with advice then be taken to this new world of hip-hop that Shao got them involved in. Ra-Ra talks to Zeke about how new and cool everything is and Zeke (seeing his Ra’s clearly out of his comfort zone) assures him that he’s cool too and belongs here. Listen, if that ain’t the nerdiest shit right there: that worry of inadequacy because you don’t see the full scale of what you bring to the table. Keep in mind Zeke is smart, and so is Ra-Ra, but Ra-Ra doesn’t have a knack for any other element of hip-hop yet. He’s all knowledge at this point.

Now, although Ra-Ra’s quick thinking gets them banned and Shao gets them back in good graces, he’s helpful in problem-solving as he blindfolds Shaolin explaining how he must use the force to feel out the transition into the continuous loop for the get down.

And when Shaolin was stressing over how to take on the Notorious 3 for the DJ battle when they have superior equipment and strength in numbers, it’s Ra-Ra finding the solution to the situation through “extensive reading” of muhfucking comic books. Ra-Ra realizes the best way to defeat the Notorious 3 the group has to come together as one. Shao was lost but Ra-Ra breaks it down to him:

[quote_simple]”I’m talking about superheroes with a unity of purpose. There’s no X-Man in X-Men. Acting alone neither Wolverine nor Cyclops could defeat the Herculoids but acting together… if every man in the get down brothers rhymes… with our rhymes combined (You can’t rhyme) I can if Zeke writes it. Zeke’s gotta write rhymes for all of us.”[/quote_simple]

The harshness is that Ra-Ra struggles the most to rhyme on beat. Everyone else is adding Emcee’ng to their skill set but he can’t get it right. He’s the weak link in Shao’s eyes and can’t use him in the battle. Seeing Ra break on that frustration wanting to be involved, as it was his idea, feels like Shao is the cool kid not letting him sit at the table. The best part about this scene is when Dizzee realizes the issue is that Ra-Ra’s mind moves too fast so he needs a beat he can double time too. Bruh, when that fucking beat dropped and Ra-Ra went full Wally West-era Flash-level speed on the beat?! Everyone was not only impressed but blown the fuck away. I jumped up from the couch with the most visceral Black as all fuck, “Whaaaat?! Come on, Ra!” erupting from the depths of my soul. This scene was genius in showcasing that although Ra couldn’t rhyme the traditional because his mind works differently, he could still bring the thunder.

This was also a strong scene as we see the nerdiest of the group get validation from Shaolin Fantastic and even an apology as he tells Ra, “I was wrong.” Ra-Ra was always at the cool kids table, he just needed to prove it to himself. The real hard shit though is seeing how everything came full circle with Star Wars as they incorporate it into the battle.

I love it when pop culture comes full circle. I know a lot of folks are saying this had its cheesy moments or comes off corny, but that’s why I liked it. From jump, we were seeing a story unfold as a comic book, just like I was told. Some may take issue with the historical portion of hip-hop as they were presented, but for me, The Get Down serves as an alternate universe of the beginnings of hip-hop. The fact so much focus was on comic books and Kung Fu made me feel right at home watching this. I truly felt like was witnessing the “back in the day we solved our problems on the dance floor” era at work.