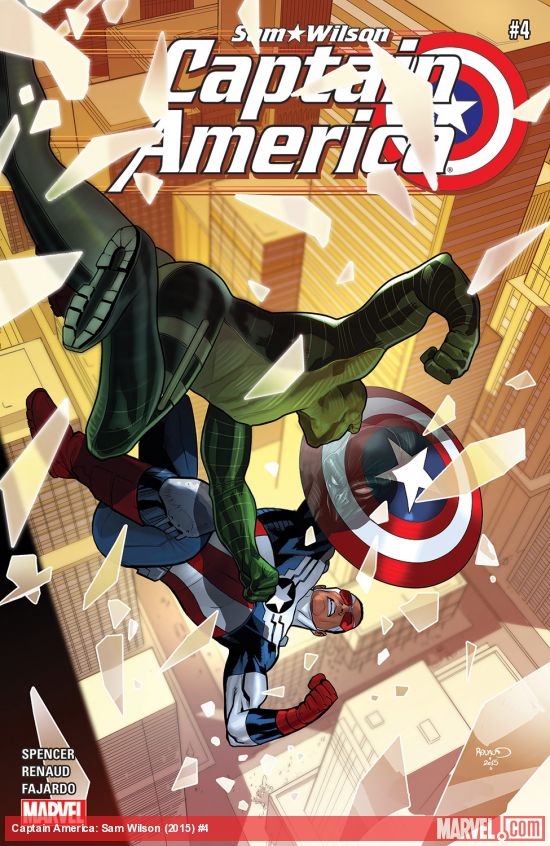 In issue #4 of Captain America: Sam Wilson, Cap continues his campaign against the structural evil in the world. Without having to deal with the red tape and bureaucracy of S.H.I.E.L.D. he also loses out on its protection as is dealing with a negative public perception after taking on the shield. Oh, and he’s also still a werewolf.

The rebranded face of villainy in this issue is Serpent Solutions – formerly known as the Serpent Society. Their current strategy is to combine their resources with those of Wall Street to combine their respective morally corrupt agendas. This continues the theme of the series where Sam Wilson, without the backing of S.H.I.E.L.D., is now the little guy taking on the big baddies he probably couldn’t touch before without risking a diplomatic crisis.

While Sam being turned into Cap-Wolf seemed to change the entire tone of the book with no warning, issue #4 is able to combine the humor of Teen Wolf (Michael J. Fox, not MTV) with the somber introspection and worthwhile exposition that’s made this series enjoyable for the reader. Yes, everyone comes up with a dog joke. But those are balanced out by seeing Cap battle with the side effects of his temporary condition and go full-on “wolfie” from time to time.

Also, the introduction of a new Falcon sidekick, besides RedWing, will be interesting. I should’ve seen this coming last issue but once we learned that Joaquin Torres was merged with RedWing and could fly, it was basically official. If people were upset about Sam Wilson becoming Captain America, how are they going to feel about the new Falcon being a Mexican-American that used to help people across the border? Doesn’t matter. Spencer’s done a good job so far of walking the line between being politically relevant but not overwhelmingly proactive.