Well, that quickly turned into a horror show.

If you haven’t been keeping up with Champions, the latest crossover event with the Avengers had some lasting ramifications for their resident android. Viv was left a bit more human and with a sister/doppelgänger of sorts. The last issue did a great job of portraying Viv’s difficulties adjusting to her new human form and living with Viv 2.0, who reminds her of who she used to be. Predictably, and rather quickly, Viv 2.0 is relegated from an interesting dynamic to an immediate threat. 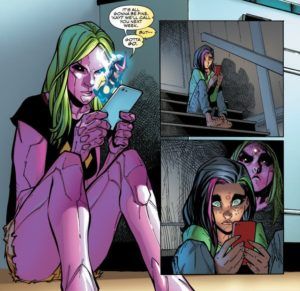 Now, I can’t say I didn’t see this coming because I mean, come on—evil twin. And while Viv 2.0’s presence presented an interesting dilemma, the writing was practically on the wall with her erratic behavior in the last issue. I just didn’t expect the reveal of her present danger to happen so soon. And boy, does the creep factor get turned up to eleven. Let’s just say that Viv 2.0 gets a little extreme and it’s a bit reminiscent of the early issues of the Vision solo series.

Meanwhile, the team’s new expansion is a fun one as they all get to know each other. It’s really great to see a lot of the young and legacy heroes together on one page. They might be more than a little cramped but their optimism is always refreshing. Unfortunately, the newly expanded team is thrust immediately into their first mission and we don’t really get to see anything but surface-level interactions between the new and old members. Hopefully, Waid will explore the pairings of these characters a bit more in the future. 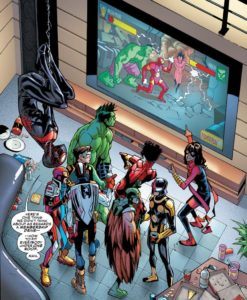 Ramos’ unique art style still does a great job of giving our heroes a youthful look and keeping the action fun and energetic. What really stands out is the way he draws Viv 2.0 in this issue. How is it that she looks exactly like the original Viv, yet ten times more menacing? It really adds to the tension toward the latter half of the book.

Champions remains the go-to book if you want a fun series featuring Marvel’s legacy characters. However, a lot of the focus lately has been on Viv. Let’s hope, moving forward, that they give some of the other characters a chance to shine, especially the newcomers, whom readers might not be familiar with.